TAYLOR SWIFT HAS testified that former radio DJ David Mueller reached under her skirt and intentionally grabbed her backside during a meet-and-a-greet photo session before a 2013 concert in Denver.

“He stayed attached to my bare ass-cheek as I lurched away from him,” the pop star testified during an hour on the stand in federal court during a trial over the claim.

Swift said she tried to get as far away from Mueller as she could. She said she told him and his girlfriend, Shannon Melcher, who was also in the photo, “thank you for coming” in a monotone voice before they left.

Despite being stunned, Swift said she did not say anything to Mueller and did not halt the meet-and-greets after Mueller left because she did not want to disappoint a few dozen people waiting in line for their turns for photos with her.

She testified she first mentioned the incident about 15 minutes later to her photographer, Stephanie Simbeck.

Mueller has sued Swift and others on her team, denying he groped Swift and claiming they cost him his job. He is seeking up to $3 million in damages. Swift countersued, alleging sexual assault, and is asking for a symbolic $1 judgment.

In her testimony, the pop star was cordial, but direct and sometimes testy while being questioned by a lawyer representing Mueller.

When questioned about her reaction when she learned that Mueller had been fired over the allegations, Swift replied that she was not going to allow the lawyer or Mueller make her feel like it was her fault.

Swift, questioned repeatedly about how she was groped, testified that “it was a definite grab. A very long grab.” She also said that no one else could have groped her.

“It happened to me. I have a 3D re-creation of what happened in my brain,” she said. 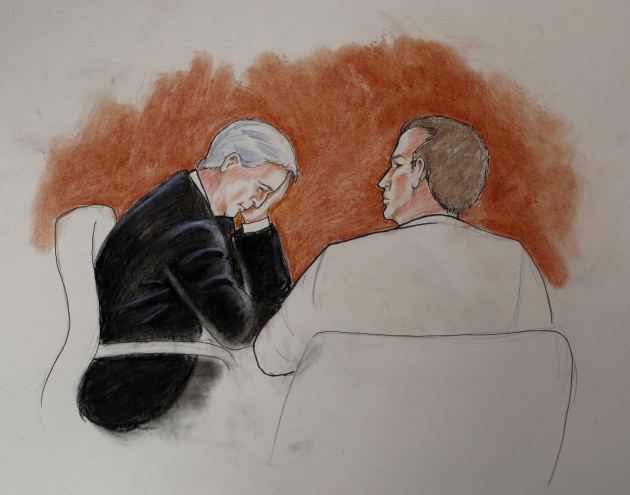 A courtroom sketch of David Mueller alongside his lawyer.

Swift said a photo of the alleged assault, sent by a Swift liaison to Robert Call, the general manager of the radio station Mueller worked for, showed the exact moment that Mueller groped her.

In the image, shown to jurors during opening statements but not publicly released, Mueller’s hand is behind Swift, just below her waist. Both are smiling.

But she said she would not have needed the photo to remember Mueller.

“I wouldn’t have needed that photograph,” Swift testified. “I could have picked him out of a line of a thousand.”

Swift also testified that a security guard working for her witnessed the groping.

She testified guard Greg Dent saw David Mueller “lift my skirt” and grab her but that it was it was impossible for anyone to see Mueller’s hand beneath her skirt and on her buttock because they were posing for the photo with their backs to a wall.

When asked if she could see the incident directly Swift said she couldn’t see exactly because her “ass in the back of her body.” https://t.co/3hYJySWRzQ

Swift said that someone would have had to have been underneath her to see the actual groping during the photo shoot “and we didn’t have anyone positioned there,” drawing laughs from the audience in the courtroom.

Mueller testified yesterday that the photo taken before the concert was “weird and awkward,” but he insisted that he touched Swift in the ribs, not in the rear.

Mueller testified his hand was touching Swift’s skirt after he put his arm around her and their arms got crossed:

My hand was at rib-cage level and apparently it went down.

The case is being tried in federal court under a law that allows proceedings when the parties live in separate states and the dispute involves a damages claim higher than $75,000.