FOR 14 YEARS, Niall Maher was Bolton Wanderers through and through.

Growing up in Manchester, he had been at the club since the age of six.

As a young child, he had been there for the good days, when Sam Allardyce would frequently mastermind an overachieving Trotters team’s victories over Premier League sides of the calibre of Arsenal, and Jay-Jay Okocha could consistently dazzle enraptured crowds at the Reebok Stadium with his irrepressible, impudent skills.

Maher frequently dreamed of emulating his heroes, and would eventually do so.

A successful academy graduate, he made his debut in the Championship while on loan at Blackpool, making 10 appearances in total for the Seasiders during the 2014-15 season.

Yet it was on 2 April 2016 that his big chance came and he made his Bolton debut. He started in defence at home against Reading, completing 90 minutes of that match.

The game itself was far from the ideal setting for an inexperienced youngster to come into a team, however. Rob Holding, another young player who would subsequently join Arsenal, was sent off after just 22 minutes.

Yet with Maher at the back, 10-man Bolton held firm until second-half stoppage time, when a stunning 35-yard Ola John effort broke the hosts’ hearts. 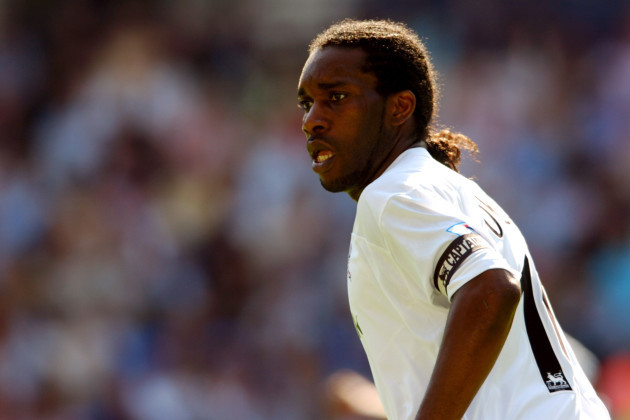 Maher grew up watching stars such as Jay-Jay Okocha at Bolton.

At the time, Bolton were in disarray. Maher was one of five academy graduates fielded that day. The result left them firmly rooted to the bottom of the Championship table and on the brink of relegation.

Jimmy Phillips had been caretaker manager for less than a month after the Trotters parted company with Neil Lennon.

With resources thin on the ground, Maher made a further four appearances but could not help prevent Bolton from being relegated to League One.

It was then that the situation went from bad to worse. The Manchester native had been told he would be getting a new contract, only to be informed two weeks later that the club he had spent 14 years of his life at were cutting him loose imminently. He hadn’t yet turned 21, but had already been exposed to the cruel realities of professional football.

Having devoted over a decade of service to Bolton, Maher says the club did not tell him in person that he was being released, nor were any of the coaches or main authorities there tasked with breaking the bad news to him. Instead, it was left to the club secretary to phone him up and confirm that — contrary to what had been suggested previously — he was being released.

I did 14 years there,” he tells The42. “They looked after me from when I was a young boy. It was always good being around Premier League players at such a young age. It was such an (ambition) to get to that (first-team) level. You set your goals high, and making my professional debut for them was a proud moment for me and my family.

“I was working so hard, with them taking me up and down the country every weekend.

“It was a huge shock (getting released). Going into the summer of that year, I had been told I was going to get a contract there. They said: ‘Go away and we’ll negotiate your contract over the summer.’

“We felt a bit let down, as we were promised that we would be kept. It was a shocking moment — to be told you were getting a contract to two weeks later being told you were leaving.

We had a good relationship with the interim manager (Phillips), who stood in (once Lennon left). Towards the end of the year, he said: ‘Listen, you’re getting your contracts, you’ve done well. You’ve always done well — we’re looking forward to using you next year.’

“But it was just the new owners – financially, they weren’t in a stable position. And there were 20 players that ended up getting released.” 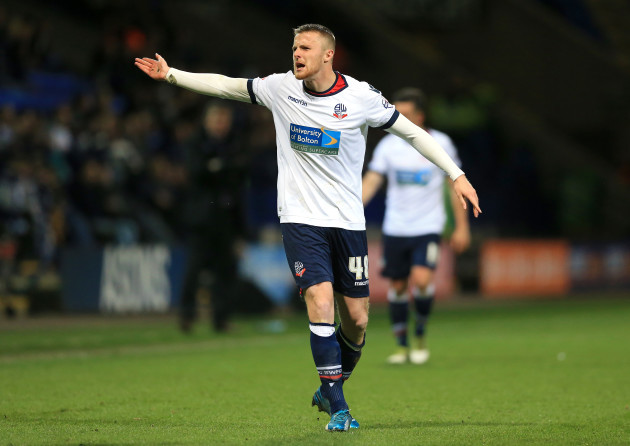 Maher made five appearances before being released by Bolton.

Did the club’s actions make him feel underappreciated and disrespected after he had spent over a decade there?

That’s how I felt,” he says. “I’d been there for 14 years. The games I played I gave my all in, proving myself that I could make that debut after 14 years. It was a kick in the teeth to be promised (a new deal) and be told two different things. I felt we got cheated.”

He subsequently joined Bury and made 22 appearances for the League One side, who also had former Arsenal and Liverpool star Jermaine Pennant within their ranks during the 2016-17 campaign.

Just to be in that first-team environment was a major thing for me as a young lad,” he says.

“Going (to Blackpool) at 20-years-old and playing in the Championship against top-class opposition, it was very good for my game and obviously improved me as a player.

Going from the Championship to League One (with Bury) has given me a chance to look at the different styles of players, how the leagues work and what you’re going to come up against.

Having struggled to play consistently in English football, the lazy assessment to make of Maher is that he was a ‘failure’ or ‘reject’ across the water. But such criticism is far too simplistic. What casual fans may not appreciate is how difficult it can be simply to have the resilience to get to the levels the youngster has reached.

An excellent recent book by the respected football journalist Michael Calvin, ‘No Hunger in Paradise,’ highlights some startling facts — only 180 of the 1.5 million boys who play organised youth football in England will become a Premier League pro, which is a success rate of 0.012%. The percentage of players who make it to the Championship or League One is not that much higher, so Maher in fact represents one of the lucky few to get this chance at all.

Yeah, it was a challenge,” he says of coming through the academy system. “I was fortunate enough in my age group, there were three or four of us that progressed all the way through and obviously went on to other clubs. But it is harder for homegrown players (in England) to progress now. You can see it in the transfer market with the ridiculous (fees being paid for players).

“It is kind of stopping homegrown talent developing at this moment in time. Players just want to go and prove themselves, so the main thing is just getting first-team games under your belt and progressing from there.” 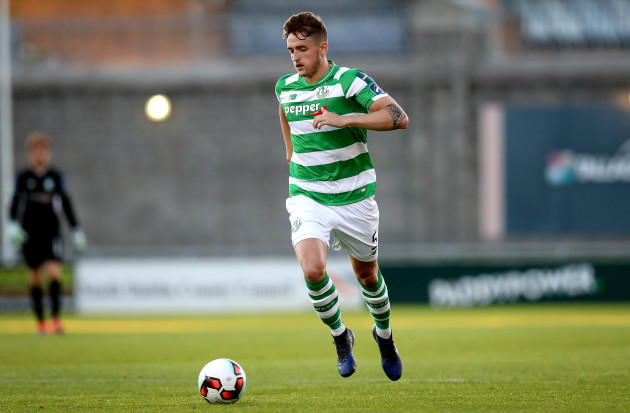 After being released by Bury at the end of last season, upon the expiration of a one-year contract, Maher spent the summer searching for a new club. Having fulfilled a long-time dream by making his Bolton debut just over a year previously, his fortune had turned drastically in such a short space of time. The situation he suddenly faced emphasises how harsh and unforgiving football at that level can be for any young players who struggle to instantaneously live up to certain coaches’ incredibly high expectations.

In pre-season, Maher spent a week with League Two side Swindon among short stints at other clubs. Yet frustratingly, he could not get a deal over the line, despite training and taking part in friendly matches. But recently, the youngster finally got a break, as an opportunity that caught his eye promptly came up.

Galway were in need of someone to bolster their defence following highly rated centre-back Lee Grace’s move to Shamrock Rovers on 31 July.

Maher’s signing was consequently confirmed earlier this week and Galway are hopeful he will be available for this evening’s crucial match away to Bohemians.

With seven games remaining, Shane Keegan’s side are in a perilous situation, second from bottom in a league where three sides will be relegated this season. However, a decent run could yet save them, as they remain just three points behind Sligo Rovers in ninth, with the Bit o’ Red having played a game extra than their rivals for the drop. A recent win over St Pat’s, which enabled them to reach the FAI Cup quarter-finals for the first time since 2010, was a timely boost for the struggling Tribesmen.

Having been handed the number five jersey, Maher, who can play anywhere across the backline but feels most comfortable at centre-half, is well aware of the responsibility that has been placed on his shoulders, referring to the team’s remaining league fixtures as “seven cup finals”.

Straight away when I heard Galway United were keen to sign me, it was an opportunity I jumped at,” he adds.

“I had offers in Wales to go and play football, but I knew that this was a challenge.” 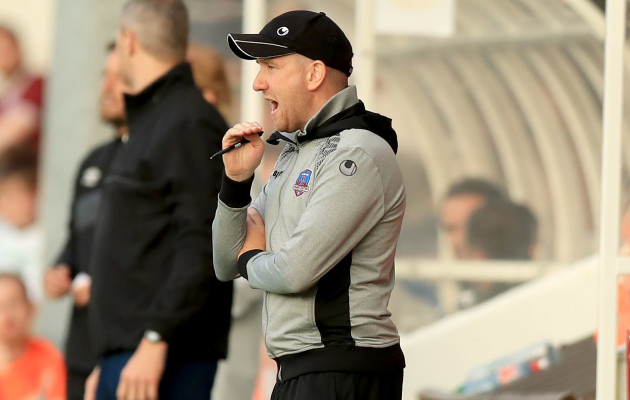 Shane Keegan’s Galway side have seven cup finals between now and the end of the season.

As is to be expected with an English-born player, Maher, who has signed with Galway until the end of the current season, admits to not being overly familiar with the League of Ireland. Nonetheless, the 22-year-old understands that he should not expect an easy ride in the coming weeks by any means.

It wasn’t a league that I’d really looked at,” he explains. “I’d heard of clubs like Cork and Dundalk from them being in the Champions League qualifiers and the Europa League. I knew there were big clubs in it and obviously, the league’s picking up. You see many lads going back over to England, which is good for the league, because more people are recognising it now.

“A lot of Irish lads come over to do the scholarships (in England), but not many progress through.

I’m young, I’m still learning my trade even though I’ve played at higher levels against some of the top teams in England. I just want to play football and develop as a player. Hopefully, whether it be here, back home, or anywhere else, this will stand me in good stead (in the long-term).”

Maher shares an agent with fellow Galway defender and ex-Newcastle youngster Stephen Folan, who has been giving his new team-mate advice on the league and helping him adjust to unfamiliar surroundings.

The first week, I was dancing around places (trying to find somewhere to live) until something firmly set in,” he adds. “Over the last few days, I’ve moved into a place with a couple of the lads, they’ve made me feel really welcome, helping me and showing me around.

“I’m just looking forward to from now until the end of the season and seeing where it takes me.

This is my first time away from home, but you can’t let that stop you from doing something you love. I’m just happy to be back playing first-team football and being in an environment where I can show people what I’m about.”

Every week, we’re giving readers the chance to take us on in predicting the Premier Division results. After Week 23, here are the standings:

Next up is David Judge from Dublin…

‘Each season I’ve given up starting my career, but I’ll be working long enough when I finish football’>
15 months on, Aiden McGeady still aiming to disprove Roy Keane’s infamous criticism>