AS SOON AS the death knell rung, the postmortem began.

An emotional Fiona Coghlan led the choir on co-commentary with RTÉ.

“What do you say? A competition that you were going in as favourites… you slip up in the first game, you recover in the second, you’re going into this game as favourites. You have to credit Scotland, they fought it until the bitter end.

It’s a killer blow, it’s a low-point for Irish rugby. The 2017 World Cup was a low point, we’ve reached even lower now by not going forward to the next World Cup.

Through Coghlan’s eulogy, devastating pictures of heartbroken Irish players flashed up on our TV screens.

They burst into tears and dropped to their knees as Scottish hero Sarah Law nailed a last-gasp conversion, one which kept her side’s qualification dream alive, and ended Ireland’s.

The sweetest way to win, the toughest way to lose. Especially with so much on the line.

A reminder of just how cruel sport is.

“This is desperate,” Louise Galvin, another former international, added in studio. “You can hear it in Fiona Coghlan’s voice in commentary.

It’s just so gut-wrenching for the players and you can see it in the images that are flashing on our screens right now. We’re all devastated, we’re devastated for Irish rugby but no one is more devastated than those players on the field and that’s who I feel the most for right now, that they’re in this position.”

Ireland led by five points in the final minute in Parma, knowing that victory or a draw would keep their qualification bid for next year’s World Cup in New Zealand alive.

A bonus-point win would have resulted in direct progression, a straightforward win or a draw handing them one more chance in a last-ditch repechage. But Chloe Rollie’s late, late try and Law’s extras ended it all for Ireland, as Italy advance as tournament winners and Scotland get another opportunity. A very achievable one, at that. 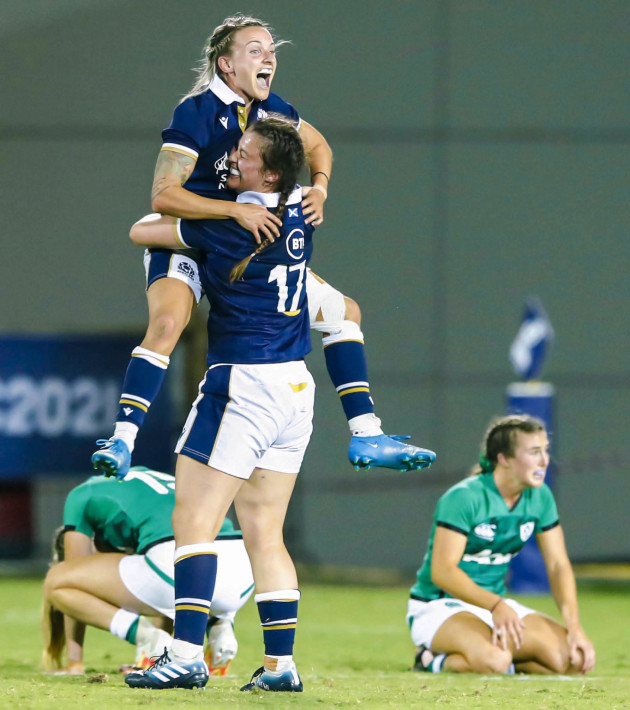 Scotland celebrate as Irish players drop to the ground.

Alongside Galvin in Montrose was Grand Slam winning coach, Philip ‘Goose’ Doyle. He was lost for words, Ireland having reached the semi-finals of the World Cup under his watch in 2014, and qualified for every single one since 1991.

We’re all well aware that serious conversations regarding the bigger picture of Irish women’s rugby must be had; deep dives into structural issues and disparities in funds and resources, and analysis of things that simply should not be happening, on and off the pitch, necessary.

But this wasn’t the time.

“Absolutely, leave that for another day,” Doyle, who was also head coach of Scotland in recent seasons, frowned. “I just feel sorry for the players and what they’ve put into this competition and trying to get to the World Cup, but this is serious. There’s been issues, and they’ve really come to the fore now. But we’ll wait for another day to do that. I just feel very sorry for the girls.”

On Twitter, Ireland and Leinster great and current London Irish star Sean O’Brien was one of many airing their opinions.

It would break your heart looking at the Irish women’s team after that defeat,” he wrote. “The effort and sacrifice they make is incredible and I think it’s very fair to say not enough is done for them! The powers to be need to do more IMO!”

Exactly that was put to Adam Griggs in his post-match press-conference.

Could more be done for the players so that this doesn’t happen again?

“Look, I won’t comment on that at the moment,” the Ireland boss responded, as expected. “We were trying to focus on this tournament and we’ve fallen short. The bigger picture stuff is for other people to answer in time.”

The time is now. A bleak month — after the inter-pros changing facilities fiasco at Donnybrook Stadium and the shock Spain defeat, within days of one another — just got a hell of a lot bleaker.

A killer blow, a low-point for Irish rugby on a dark, dark day in Parma.

And the general consensus is there will not be brighter days ahead without systematic change.