Gillian Tracey speaking about the loss of her son Ciaran to reporters today.

It’s an insult to my little boy.

THE MOTHER of a four-year-old boy killed by a drunk driver in Co Laois has said opposition by some politicians to the new drink-driving Bill is “an insult” to her son.

Gillian and Ronan Treacy’s son, Ciarán, was killed by drunk-driver Finbarr O’Rourke on the afternoon of Thursday, 17 April 2014.

O’Rourke had consumed up to 10 pints of cider.

The Treacys were the faces of the Road Safety Authority (RSA) Christmas campaign last year, which urged people not to drink and drive.

A rural versus urban divide has emerged between some TDs and senators over the proposed new law, with some TDs saying it is unfair to those living in rural Ireland.

Some critics have called the RSA figures into question, while others have said the focus needs to be on Garda enforcement, rather than a crackdown on drivers.

“We opened our lives, our private lives 100% to the public, to just try and get the message across about the devastation that drink-driving can cause. It has been very effective, but it has also been a huge insult the last couple of weeks, to see the opposition to the Bill… it is an insult to my little boy, losing him, and my injuries, and all the other people who have lost people to drink-driving,” said Gillian. 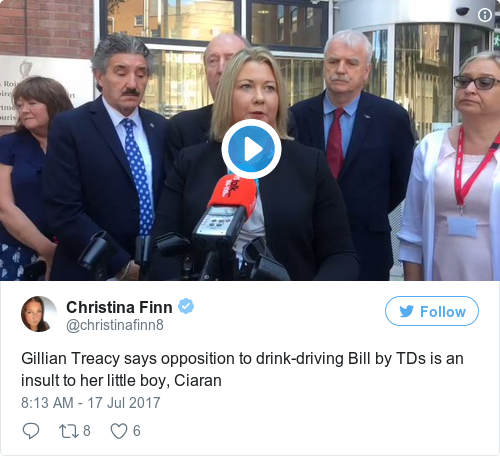 Gillian Treacy says opposition to drink-driving Bill by TDs is an insult to her little boy, Ciaran pic.twitter.com/U69BjODreV

One of the Bill’s most vocal critics has been Kerry TD Danny Healy Rae.

In May, the Independent TD said that eating a big meal can be as dangerous as drink driving.

Last week he argued passionately that a driver who has consumed “two or three glasses” of beer represents no danger to the public, which resulted in clashing words between Healy Rae and families of those that had lost loved ones to road accidents.

She said families who attended today’s meeting were very angry at the narrative that some politicians are pushing.

“People were very angry in there today, because we feel that we are not being listened to and the lives of our relatives are not being valued,” said Fogarty. 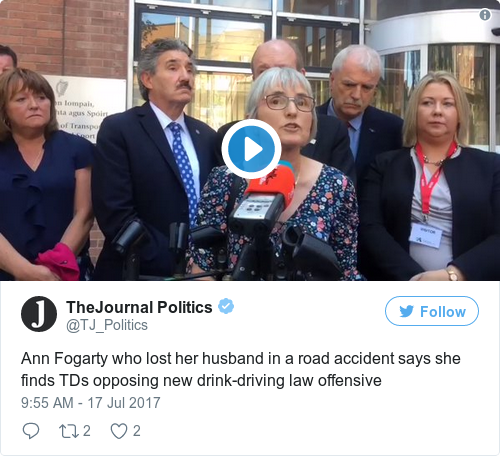 “I will not in anyway engage with Danny Healy Rae,” she said, adding that some TDs are afraid to debate the issue.

‘Get off the pitch’

Publishing the bill this morning, the minister hit out against the vintner groups and Fianna Fáil leader Micheál Martin.

The Vintners’ Federation of Ireland (VFI) has accused the minister of trying to mislead the public – insisting that only 1.3% of road deaths involve people at the lower limit.

Speaking about those opposing his Bill, Ross said:

I would call on the vintners who are opposing this Bill to get off the pitch.

I call on Micheál Martin of Fianna Fáil to support the Bill. I know his heart is in the right place on issues of this sort and I can’t understand why Micheál Martin, [Fianna Fáil’s transport spokesperson] Robert Troy and others are opposing the measure, which will undoubtedly save lives.

So we are looking for their support and we will be campaigning for the support of many more.

In a bid to get ensure the new law proceeds through the Dáil, the minister said considerations are being given to the introduction of a tax break for publicans who agree to drive their customers home after a night out.

This idea was first put forward by Fianna Fáil’s Robert Troy during a committee debate on the issue at the beginning of the year.

In an interview with TheJournal.ie in February, Ross said the government may look at giving supports to publicans to help get their customers home.

He said all suggestions would be looked at, “but not if it is going to be very expensive”.

Speaking on the matter today, Ross said all suggestions that could make it easier for people to get home at night would be considered.

The minister said he has asked for a meeting to be set up between the Insurance Federation and the VFI to establish if such measures can be facilitated in some way.

“If this eases the process of the Bill, which means lives are saved, fair enough, we will look at it. We are very happy to look at any constructive suggestions along those lines,” he added.

A decision on whether Varadkar will impose the whip for other Fine Gael TDs will be decided at a parliamentary meeting in the autumn.

Read: ‘If a pilot had two or three glasses to drink I’d still get on the plane’ – Danny Healy Rae on drink driving limits>

FactFind: Have people been killed in road crashes where drivers were just over the limit?>