YESTERDAY AFTERNOON, THE Glenisk yoghurt factory in Offaly was a hive of usual activity.

Staff came and went, so too did the tankers carrying the popular dairy products. But today there is a different kind of activity.

When The Journal visited the factory, fire engines were still at the scene of the blaze which gutted the 35-year-old business.

Insurance assessors roamed what was left of the plant, while some staff came to look at where their workplace used to be, some too upset to speak, others bewildered by what was in front of them.

The debris of the fire remained, while the smell of smoke and ash filled the air.

Glenisk was well into its fourth decade in Offaly when the fire occurred. The business was built from scratch and employed dozens of people in the area.

The devastation will not just affect those directly hired by the company: dairy farmers and other suppliers who rely on the factory will face a significant loss of income as the company comes to terms with what happened.

The blaze is understood to have started in the incubation room of the plant, where the yogurt is produced.

Within seconds of staff smelling smoke, a fire ripped across the incubation room wall, devastating everything in its path.

Emma Walls, commercial director for Glenisk, said the fact that everyone got out of the plant without serious injury is something which is giving comfort to workers.

She told The Journal: “We’re pretty heartbroken. It’s been an awful 24 hours, it’s hard to believe this time yesterday, the plant was working as normal. And we’re just devastated.

“We were shocked yesterday. But we were also very relieved that everybody got out safely, all of the fire protocols worked the way that they should.

“Everybody’s safe and we’re not discussing something much more serious this morning. But of course, the plant is gutted and it’s just very difficult to process.”

Walls spoke of the rebuilding plan for Glenisk, but was quick to mention those who rely on the plant for work, particularly local dairy farmers.

She said that Glenisk had survived many challenges over the years and that the blaze was just the next one that the company has to contend with.

“We are here 35 years. And you can imagine over that period, we’ve encountered a number of challenges, not least the recent challenges around Covid,” she explained.

“And it’s a very resilient business. So our priority is the safety of the staff. And after that it’s actually protecting jobs, protecting the family farms that supply us.

“So we’ve 90 employees, and we have another 50 family farms, all of them depend on us. And we depend on them. So we’re going to rebuild, and they’re going to be part of that story.

“We have an incredible workforce, and we’re going to do everything that we can to protect them.”

Bernard Kavanagh of Protect Fire Services was at the scene of the blaze this afternoon.

His firm was in charge of fire training for Glenisk and he described how local companies, even rival firms, are coming together to help out the Cleary family who owns Glenisk.

He described a “great community spirit” in the face of tragedy.

Everyone got out. That’s the main thing, that’s a huge thing. Buildings can be replaced but you can’t replace a life.

“But you have rival businesses saying to the owners, ‘if you need anything we’re here’. That’s the kind of thing which I think shows you that some things are bigger than money.

“It’s a great reflection on the people in the area and it goes to show you the kind of people we have out here.” 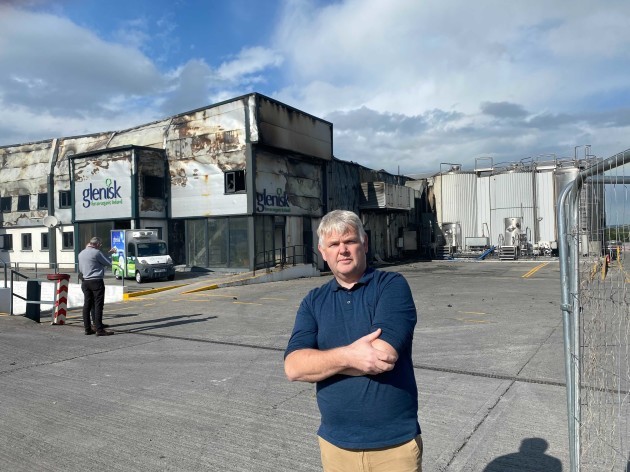 Around five kilometres from the blaze, locals gathered outside Gorman’s shop in the village of Killeigh. One man who works for the company said he was still getting his head around things and that he didn’t wish to speak.

However, Rita Daly, who lives in nearby Geashill, said yesterday’s fire was a “terrible blow” for the area.

“Glenisk has been here a very long time and they have looked after people here,” she said.

“My own son worked for them years ago and loved it there. I just hope they can come back and get back on track. They’ve brought a lot of money to the area and jobs so I hope they can get whatever help they need.”

The Irish Farmers’ Association (IFA) extended its wishes to the Cleary family and the staff at the facility following the incident.

The group’s Organic Project Team Chairman Nigel Renaghan said the fire is devastating for the Cleary family and the Glenisk brand.

“The fire could have disastrous consequences for organic milk suppliers. The facility handles the majority of organic milk across the island of Ireland,” he said.

Glenisk sources milk from approximately 50 organic dairy farmers across Ireland and it’s the destination for 90% of organic milk.

“Up to now, the company had bolstered its sale of organic yogurts, following a period of growth since the Covid-19 pandemic began,” he said.

“The number of staff employed by the firm had grown to 85 and it held the number one position in the yogurt market in Ireland with a 19% share.

“Glenisk suppliers must be safeguarded at this time, and alternative arrangements put in place for the processing of the milk.”

Local Fianna Fáil TD Barry Cowen said today that the community remains in shock and that locals are “devastated” for the Cleary family.

“We are just glad and thankful to the fire service and the emergency services for the work they did at such short notice and ensuring there was no loss of life or major injuries, that is the most important thing,” he said.

Local Sinn Féin TD Brian Stanley also urged the government to do all they could to support the workers and management at the plant.

“This business is an important local industry for the region, and it is vital that we get it back on track as soon as possible,” he said,

Glenisk now intends to get back on its feet as quickly as possible, according to one of its owners Vincent Cleary.

For now, the company, its staff and suppliers must deal with the fallout from a blaze that crippled a thriving Irish business in just minutes.