MEMBERS OF THE Public Accounts Committee have said they believe Garda Commissioner Nóirín O’Sullivan can no longer remain in her position following their findings in relation to financial irregularities at Templemore training college.

In its damning report, the PAC criticised a culture within the force of “withholding information, providing inadequate information and keeping issues internal to avoid external awareness and scrutiny of very significant financial issues” in the college.

Conclusions in the report include:

Social Democrat TD Catherine Murphy pointed out that an audit back in 2008 had “a very substantial amount” of the same information about these irregularities that found its way into a later report in 2010, and then again in the most recent audit.

Murphy said the public had no knowledge of what was “going on behind the scenes” until they saw it in full view at the PAC and it was “difficult to see how it could have ended up in the public domain” without that. 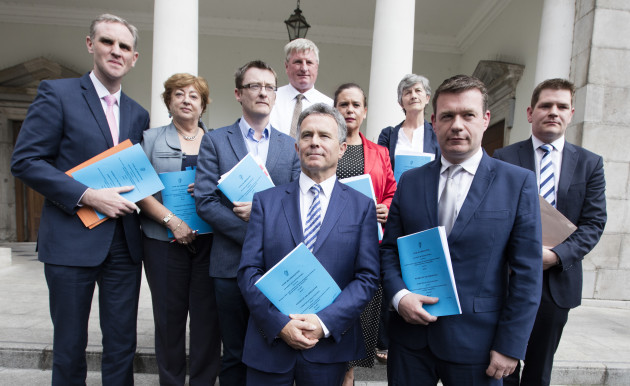 Members of the PAC were highly critical of garda management today.

Independent TD Catherine Connolly said she believes there is a “crisis in this country in relation to governance”, and it is not restricted to An Garda Síochana. She also said she thinks Nóirín O’Sullivan had “inherited a situation”.

Some of Connolly’s fellow committee members, however, took a harsher view in relation to the Commissioner. Speaking after the launch of the report, Sinn Féin TD Mary Lou McDonald said it is “absolutely evident that the Garda Commissioner’s position is untenable”.

The Taoiseach now needs to be decisive, he has to do the right thing, he has to do the thing that is in the interests of rebuilding public confidence in An Garda Síochána and he needs to tell Nóirín O’Sullivan that it’s time for her to go.

Her party colleague David Cullinane called on the Commissioner herself to take decisive action and step down.

Labour TD Alan Kelly, who is vice chair of the PAC, said “the garda commissioner’s position is totally untenable”.

“It’s a quite crazy situation where you have the majority of people who are elected to represent people in the Houses of the Oireachtas, do not have confidence in the Garda Commissioner but yet she can stay in office,” he added.

Responding to the publication of the report, a garda spokesperson said: “An Garda Síochána received the report of the PAC today and we will now take the necessary time to fully review the report before commenting further on it.”

Minister for Justice Charlie Flanagan also said the recommendations will be examined carefully to see what actions are necessary and appropriate.

“The garda authorities have stated that they understand the gravity of the issues identified in the Interim Audit Report and are taking comprehensive steps to progress its recommendations as quickly as possible,” he said.

“The only way to deliver world class policing in Ireland is to ensure that An Garda Síochána has the resources it needs and that those resources operate in an organisation whose culture is open and responsive and where the best management systems and practices are deployed,” the minister said.

“We are confident that the reform plan that is being pursued by the Commissioner, supported by the Government and overseen by the Policing Authority, has the capacity to achieve this. It will not be done overnight and it will not be done easily, but with the necessary support and oversight, it can be achieved over the next four years.”

Speaking to the media in Donegal this evening, Finance Minister Paschal Donohoe said:

I have full confidence in Commissioner O’Sullivan and the work that she does… I haven’t seen the report itself because we were travelling this afternoon, but I did receive a brief update from Minister Flanagan this morning.

I am more familiar with the interim report in relation the audit findings and out of the 19 findings, I know that ten of them have been implemented or partially implemented and the other nine will be happening soon.

He said he bases his assessment of the performance of the commissioner on all the engagement that he has had with her as a minister who sits on the Policing Cabinet Sub Committee.

“I am strongly of the view that commissioner O’Sullivan has the qualities that are needed to continue with the reform agenda in An Garda Síochana,” said Donohoe.

I support her and the choices she makes.