SEAN MAGUIRE WASN’T one of the 25 names on the finalised Ireland squad that was released yesterday.

Having made the initial provisional list for the first time, the former Cork City striker was denied the opportunity to link up for this week’s training camp in Dublin ahead of the World Cup double-header against Georgia and Serbia.

However, assistant manager Roy Keane believes the Preston North End man can count himself unlucky to have missed out, and even suggested the 23-year-old may still be invited to join the group after their trip to Tbilisi.

“He was probably slightly unlucky, and maybe experience comes into it,” Keane said this afternoon. “There’s a few days to play with and don’t rule him out of getting involved next week.

“Let’s see how the next few days go with the first game this weekend. I’ve seen him once or twice this season and he seems nice and sharp. If he keeps playing regularly for Preston — obviously he will want to get a few more goals under his belt — but he’ll be in with a shout.”

Martin O’Neill revealed two weeks ago that Aston Villa forward Scott Hogan has declared for Ireland, while another English-born striker — Hull City’s Will Keane — also hopes to line out for the Boys in Green as he returns to fitness after a second cruciate ligament injury.

When asked about the pair, Keane explained that he would welcome both into the squad.

Because we’ve got such a small pool of players, we’re always delighted when lads want to come and play for Ireland,” he said. “The two you mentioned are good players, they’re in different positions in their careers at the moment.

“The young boy Keane is coming back from a bad injury, and I know the manager has met up with Scott Hogan so we’re obviously pleased. We’ve got some good players but we’re always looking to have competition for places and we’re delighted that these lads are keen to come and play for Ireland.” 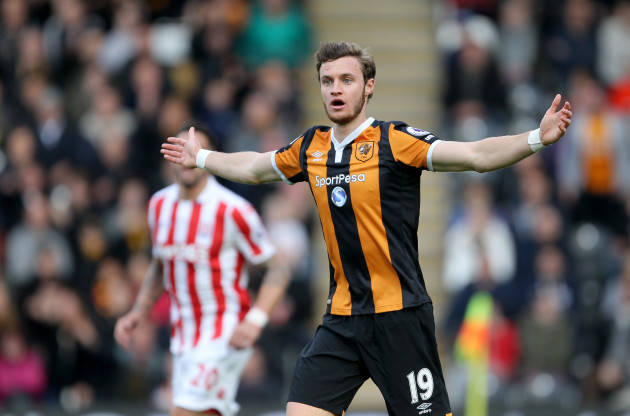 Will Keane has expressed an interest in playing for Ireland.

While Jeff Hendrick (quad), James McCarthy (hamstring) and Eunan O’Kane (groin) have all been ruled out for the Georgia game, David Meyler returned to full training this afternoon.

Sheffield Wednesday goalkeeper Keiren Westwood just worked in the gym as he looks to shake off a knee injury and both Aiden McGeady and David McGoldrick are due in later this evening.

On Walters, Keane said:  ”If you want to talk about where we think he’ll be in a few days’ time, we hope he’s got a chance.

“He didn’t train today with us, so we’ll just play it by ear over the next few days. We’re just glad he’s here and he’ll hopefully join in. I’m guessing tomorrow or Thursday.

“But I’ve not really spoken to anybody today about him because we knew he wasn’t training with us, so we just focused on the ones who were training.

“Jon is obviously a big player for us. The fact he is here with the squad makes me think he’ll have a chance for the weekend. We’ll see how the next few days goes.

We know it was a nasty knock he got, but fingers crossed.”

Earlier this month, it was widely-reported that Keane had emerged as a surprise candidate for the Israel national job. And although he is still interested in one day returning to management, the Cork man dismissed the link.

“I suppose so, but you obviously work in the media, you know how it works,” Keane replied, when asked if he was amused by the Israel speculation.

“People make things up. As you are well aware.”

‘It’s mind-boggling. When average players are going for £30-40m, it makes you scratch your head’
Irish midfielder Byrne moves to League One club in bid to resurrect faltering career