KERRY WILL FACE Tyrone in the Division 1 semi-finals, while Roscommon will come up against against Armagh in their battle to retain top flight status.

Kerry made it three games unbeaten in the Allianz Football League as goals from David Clifford and Joe O’Connor guided them past Roscommon in Dr Hyde Park.

Clifford had been well marshalled by Brian Stack but still ended the day with 1-4 as brother Paudie picked up man-of-the-match honours.

Anthony Cunningham can be relatively happy with how Roscommon performed in the losses to Dublin and Kerry. They resisted the urge to employ a sweeper in games against both sides and looked dangerous up front over the course of the two encounters.

However in the final quarter in both games Roscommon’s performance levels flagged, as would be expected when they come up against the conditioning of Dublin and Kerry.

14 minutes into the second period this game was still level but Kerry’s class told in the closing stages. Despite the 53rd minute red card to Tadhg Morley and Conor Devaney’s 69th minute green flag, the visitors finished on a strong note as substitute Joe O’Connor scored his first senior goal for the county. 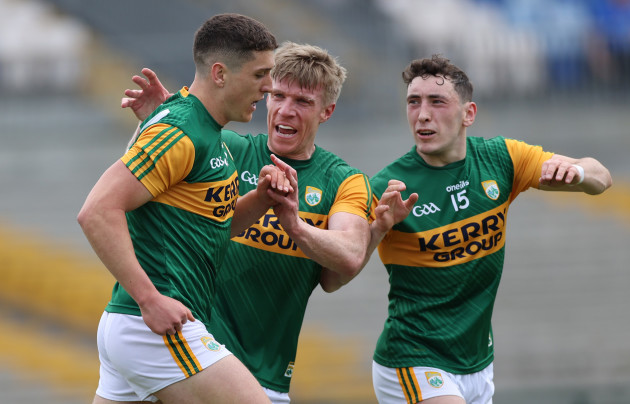 Roscommon lost Enda Smith to a second yellow card in the closing stages after a late challenge on Gavin Crowley.

Peter Keane made six changes from last weekend’s draw with Dublin, handing a debut to Mike Breen at wing-back. Jason Foley produced another good performance at full-back, while they got some valuable game-time into Stephen O’Brien and Tony Brosnan.

The Clifford brothers were joined in the full-forward line by Dr Crokes star Brosnan, who kicked two points but faded out of the game before his 50th minute withdrawal.

Roscommon took a 0-4 to 0-3 lead into the first water break. They looked composed in possession in a game that lacked intensity at stages in the opening period. Conor Cox, in action against his native county, kicked a score from a tight angle after a tidy dummy.

A Brosnan turnover led to a run by David Clifford and score from Paul Geaney. David Clifford turned provider for Ronan Buckley’s first score for Kerry, before brother Paudie clipped over his second.

Between the 17th and 32nd minutes, Kerry put together some nice moves and outscored the hosts by six points to one. It took the younger Clifford 30 minutes to curl over his first point and moments later Diarmuid O’Connor broke forward and clipped over.

Kerry brought David Clifford out to half forward in an attempt to get him more involved, pushing Geaney inside to a more familiar position. Clifford pointed an impressive free before the latter sent over a mark to give Kerry a three point interval lead.

Roscommon hauled themselves level by the 45th minute after a brace from Ciaran Murtagh and a mark by Enda Smith.

Kerry introduced Sean O’Shea, Paul Murphy, Tommy Walsh and Tadhg Morley during the third quarter only to lose Morley to a red card almost immediate after he arrived onto the field. 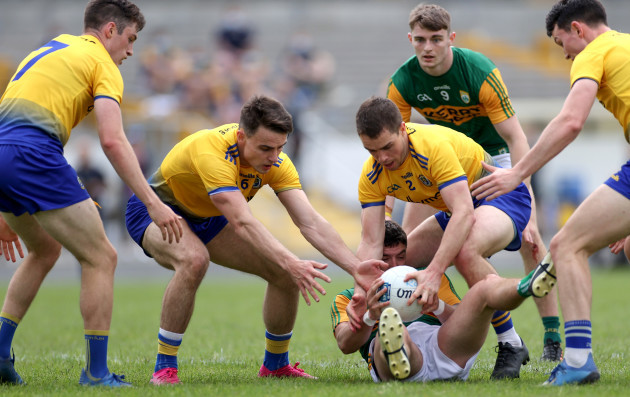 Morley’s reckless challenge on Cian McKeon left referee Joe McQuillan with no option but to reduce Kerry to 14 men on the stroke of the second-half water break.

After moving back inside for the second-half, David Clifford palmed into the net in the 57th minute, assisted by Paudie after a sweeping Kingdom hand passing move. Kerry looked to be coasting to victory until Conor Devaney’s superb finish past Kieran Fitzgibbon in the 70th minute but the tie back in the balance.

Substitute Joe O’Connor rattled the net to put the game to bed with the final play of the game after Brian O Beaglaoich and Paul Murphy combined to set him up.