TWO EURO WILL get you very little at an Ireland home international in this day and age.

Your ticket for the game? No chance. A match programme? Go again. How about a bottle of water then…? Not quite.

Yet for the fans who have touched down in a sun-soaked Tbilisi over the past couple of days, the equivalent of just that — five Georgian lari – will grant them admission to this evening’s World Cup qualifier (5pm Irish time).

With no direct flights from Dublin, many made stopovers in the likes of Munich, Istanbul and Riga on the journey east to the former Soviet Union nation, which sits in between Russia, Turkey, Armenia, Azerbaijan and the Black Sea.

As ever, the Irish diaspora have arrived too with supporters from Dubai and Australia making their presence known.

It may not be anywhere near Euro 2016 levels of takeover, but the streets off Freedom Square in the city’s centre were awash with members of the Green Army last night, and one bar even catered for those keen to keep an eye on proceedings back at Tallaght Stadium — where Shamrock Rovers ensured Cork City’s title party would be put on hold for now. 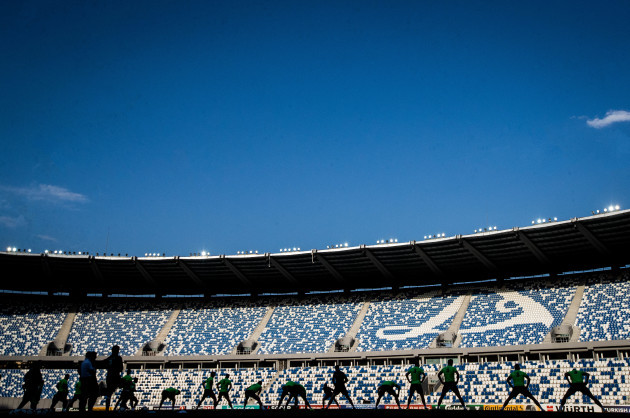 The Boris Paichadze Dinamo Arena, named after the man voted Georgia’s greatest footballer of the 20th century, hosts Ireland’s latest Group D encounter and the 54,549-seater stadium looks an unimpressive, concrete shell from the outside.

Back in October 1979, the ground — at that point known as the Lenin Dinamo Stadium — squeezed in more than twice its current capacity to watch Dinamo Tbilisi entertain tournament favourites Liverpool in the first round of the European Cup.

Still a record attendance to this day, those present witnessed one of Georgian football’s finest results as Dinamo knocked Bob Paisley’s famous side out of the competition with a 3-0 second leg victory.

Not that you can compare it to such past glories, but if current Georgia manager Vladimir Weiss was to mastermind a win later today it would represent a sizeable upset given their history against Ireland.

In a total of eight meetings going back 14 years, the Boys in Green have a 100% record. That said, all but two of those matches were won by a single goal and the Georgians have been desperately unlucky not to have come away with something in recent times.

It’s exactly three years since this fixture last took place in Tbilisi, when Aiden McGeady made his most meaningful contribution in a green shirt with a 90th-minute winner of real quality.

With plenty of technical ability but often lacking end product, Georgia have even outplayed us on occasions and they should have been 2-0 up at the Aviva Stadium last October after Levan Mchedlidze and Guram Kashia both struck the post with efforts.

That night, it was captain Seamus Coleman — still unavailable while he recovers from a double leg break — who got O’Neill’s men out of jail as sheer endeavour and a bit of luck allowed him to score the decisive goal. 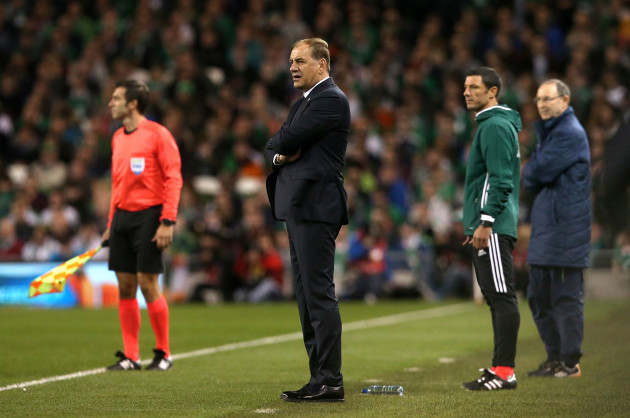 Georgia manager Vladmir Weiss with O’Neill in the background.

The Georgians held Wales to a 1-1 draw in this campaign, but they have just three points to show from six games and when former Slovakia boss Weiss was asked yesterday about not getting the breaks, he replied:

Everybody says that, everybody says we played well. We have got potential, we have a good team, but we need results. Nobody pays money for bad results.”

The home side are missing a number of key men here, but the Ireland boss made it clear that he is taking tonight’s opponents extremely seriously.

“I don’t think this is a tricky tie, I think it’s a really, genuinely difficult game for us,” O’Neill declared on Friday. “These are exceptionally talented footballers who might feel as though they haven’t had a great deal of luck in the competition. So they will cause us problems.”

With Serbia to come in Dublin on Tuesday ahead of the final two group games next month, we really are at the business end of the campaign and anything short of victory would severely dent Ireland’s ambitions to secure a place at next year’s World Cup finals.

The incredibly warm weather Tbilisi is experiencing right now will make the task that bit more difficult, but this team has, in the past, shown a resilience and an ability to grind out results — even if it’s not necessarily pleasing on the eye.

As goalkeeper Darren Randolph put it this week: “I’m not bothered about the performance as long as we get the points on the board — especially at this stage of the group.”

Win ugly, win pretty… just win. That will surely be the message.

After a difficult few months, is Robbie Brady back to his best?
Ireland set to endure soaring Tbilisi temperatures as Walters gets the green light