Some of the Irish entourage on the tour with the Taoiseach in NBC studios at 30 Rock this week were tempted to shout out the famous catchphrase when they walked onto the set of the famous Saturday Night TV show.

A couple of problems though.

First of all, it was on Friday afternoon that the Taoiseach was rushed into the Comcast Building flanked by security and secret service personnel.

And secondly, security was super tight. The Irish officials and media accompanying Micheál Martin on the tour of the iconic studios such as MSNBC were told there could be no photos. A photo opportunity would only be allowed on the set of the Tonight Show with Seth Meyers.

In the past, trips linked to the United Nations had a bit of stardust sprinkled on them.

Some of the country’s biggest hitters came out with a charm offensive aimed at putting forward our case to be on the UN Security Council.

U2 frontman Bono and former president Mary Robinson set out their stall for Ireland at the launch reception in 2018, while Bono featured in Ireland’s campaign video.

In 2020, the Irish government invited over 100 ambassadors that had a say in Ireland getting a seat to a special performance of Riverdance at Radio City in New York to mark the show’s 25th anniversary, where composer Bill Whelan, director John McColgan and Jean Butler, Riverdance’s original Irish dancer, were on hand to promote Ireland.

So on Friday, there were rumblings that Jimmy Fallon might pop his head in on the Taoiseach’s tour of NBC, given his reported Irish roots and the fact he wore a Cork jersey once a couple of years ago. But alas, he wasn’t rehearsing in the building at the time, much to the group’s disappointment.

Even though the famous Saturday Night Live set was out of bounds to photos, a few officials with the Taoiseach were slapped down for trying to take sneaky shots of the Taoiseach. The NBC studio guides meant business.

Martin was told that the show got a special exemption from the US government to continue on even during Covid, and with an audience.

Having a live audience is one of the key factors that makes the Saturday Night Live programme work, the Taoiseach was told, which is why they were allowed to have people in the studio audience, albeit at reduced capacity.

Such a move resulted in a threat of court cases being taken by other sectors who asked why a TV show was allowed to have people attend, but they couldn’t have people in a restaurant or in a concert venue.

The Taoiseach nodded along when he was told this, but spoke up to say the entertainment industry was one of the hardest hit in the pandemic. The show must have provided hope to millions of people at the time, he added. 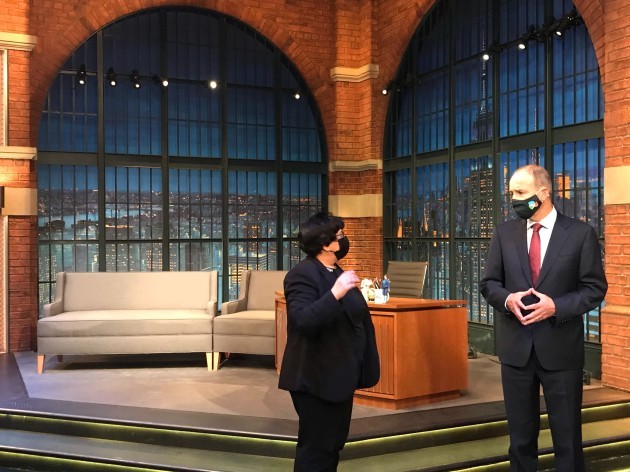 The tour of the studios took place prior to Martin sitting down with NBC executives where he told them about how Ireland was an attractive place for them to do business.

Attractive movie tax breaks has long attracted movie sets to Ireland but executives told the Taoiseach that in the next five years, productions will be ramping up due to increased demands.

The UK has always been popular for filming, but due to Brexit, there are concerns that there could be issues with set shipments and Visa requirements for the skilled workforce a movie requires, given that the UK has left the EU.

Ireland is keen to cash in on the opportunities that might present, it is understood.

The tour was one of the Taoiseach’s final events on his week long visit to New York. 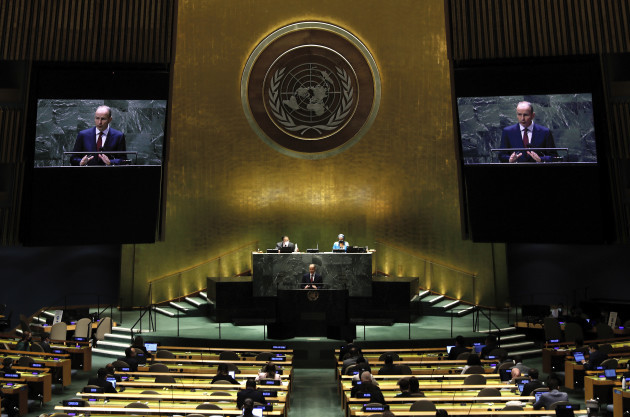 Micheál Martin addresses the General Debate of the 76th Session of the United Nations.

The set piece of the visit was Martin delivering his speech to the UN General Assembly’, stating that world was caught off-guard by the pandemic 18 months ago.

He touched on issues such as vaccine supply to countries that need them, climate change and women in conflict areas.

But it was the mention of the Israel/Palestine conflict that raised eyebrows.

Martin spoke about the most recent crises in the Gaza region, which resulted in the deaths of innocent children.

The Palestinian-Israeli conflict has been area of interest back home for decades, but officials state that interest in the topic has fallen off the agenda in recent times at international level. 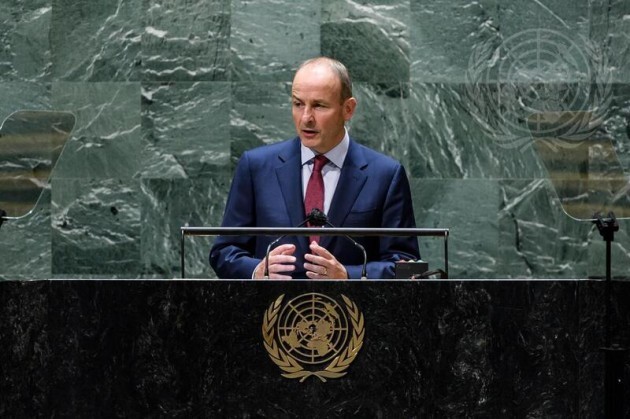 Ireland is keen to keep the spotlight on the issues there.

Due to countries being seated in alphabetical order in the General Assembly, Ireland was smack bang in the middle of Israeli officials and Iranian officials, with sources stating that when Palestine was mentioned by the Taoiseach, it resulted in the Israeli officials typing furiously on their computers.

His address to the UN General Assembly on Friday came one day after he had chaired the UN Security Council debate on climate change and security.

Ireland wants a resolution to be passed by the council that would ensure that the impact climate change might be having on conflicts around the world be monitored. 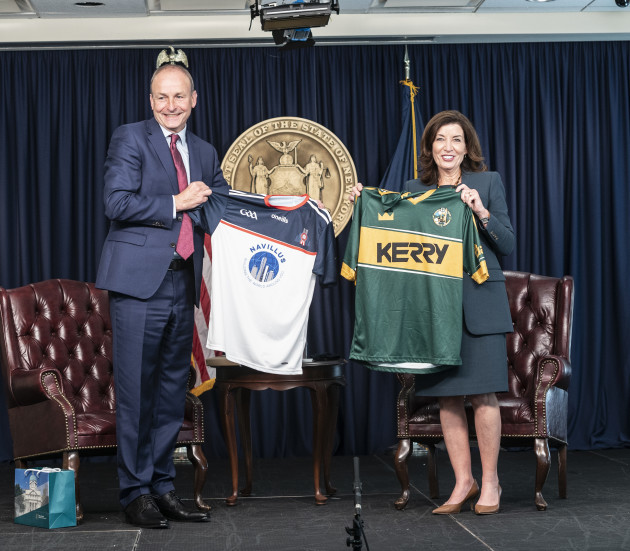 Governor of NY Kathy Hochul with the Taoiseach on Monday.

China, Russia and India are against such a motion, and didn’t mince their words in telling the Taoiseach just that on Thursday.

It seems unlikely the motion will pass by the end of this year, but the Taoiseach appears to be a glass half full man, telling reporters he was hopeful, and spoke about possibly changing the minds of the superpowers – China and Russia – though each have a veto as permanent members of the council, and therefore can leave Martin’s resolution dead in the water.

But whether the resolution gets over the line, the Taoiseach will have viewed this week as a success.

Micheal Martin the statesman. It’s a sentence that the Taoiseach has no doubt been vying to hear for decades.

In his first US trip as Taoiseach, the last five days in New York during high-level week of the United Nations was his opportunity to show that this Cork man can hold his own on the world stage.

Don’t forget, the Taoiseach missed out on the annual jaunt to the White House this year for St Patrick’s Day, and while he may not have got to meet with US President Joe Biden, despite being in the same city as him this week, being in the mere presence of so many world leaders had to count for something.

Martin served as Minister for Foreign Affairs for a time, something he regularly likes to remind people of, often recounting memories of his time in the job.

But being a minister solely focused on foreign dealings abroad is quite another from being leader of a country who has to balance governing at home while representing their nation abroad.

Eager to stay on message about the UN events, the Taoiseach recounted each day about the level of access he was getting in his bilateral meetings with other nations.

He was meeting leaders of countries that you would never get the opportunity to meet normally, and as one official put it – the bilateral meetings between leaders could be described as ‘speed-dating for diplomats’, such is the pace of the day’s meetings.

While international diplomacy rattled on during the week, it might have been easy to forget the goings on back home.

Renting stories lit up Liveline, corporation tax, the bonus for frontline workers, not to mention Zappone-gate, were still the talking points in Ireland – something the Taoiseach was reminded of daily in his doorsteps with the travelling Irish media.

While world topics being discussed at the UN are important, people back home were asking if they would have enough money this winter to pay their electricity bills and whether their rent will rise with inflation.

The reality of things back home came to the doorstep of the Taoiseach’s hotel in New York however, when two protesters spoke with Martin about the Mica redress scheme in Donegal and other areas. TDs in the Taoiseach’s own party were making noise back home this week about 100% redress being the only answer, but the protesters in New York hammered it home to the Taoiseach that he couldn’t escape the issue, even if he was thousands of miles away.

It’s a delicate balance to strike, juggling world issues while keeping an eye to make sure that none of the balls drop at home.

While statesmanship and face time with world leaders was the name of the game this week, there was also a time for reflection in what resulted in one of the most poignant moments of the trip for the Taoiseach.

At the visit to the 9/11 memorial site, Martin stopped to read and place a flower on the names of Irish people who lost their lives in the tragedy 20 years ago.

It was quiet, respectful and with no media questions allowed.

Martin will view these last view days in New York as a success. He represented Ireland’s views and priorities on the world’s stage, and even if nothing comes of our resolution on climate change and conflict, the Taoiseach believes the issues have been put on the radar of the UN Security Council at least.

There were no major faux pas, he managed not to drop any bombshells that would get him in trouble back home.

New York for UN high-level week is on high security, with cordoned of streets, thousands of cops, FBI agents, secret service agents, State marshalls and crowds of diplomats that strut through the street. One thing that no doubt did not escape the Taoiseach this week, is the sense that Ireland is a small fish in a very large pond.

The Taoiseach may well have felt like a goldfish in a tank full of barracudas this week, but Ireland is known for using its soft power to influence some real change, and Micheál Martin will be hoping he did that this week.