POLICE IN LONDON have released CCTV footage of the moment a man appeared to push a woman into the path of an oncoming bus in Putney.

The incident occurred at about 7.40am on 5 May and police are now appealing for witnesses they have not yet spoken to or anyone who recognises the man to get in touch.

The 33-year-old victim was walking across Putney Bridge heading towards the Tube station when the jogger knocked her over, into the path of the oncoming bus which narrowly missed hitting her.

Police have now released footage of the incident in the hope this man will come forward, or someone will recognise him and get in touch. 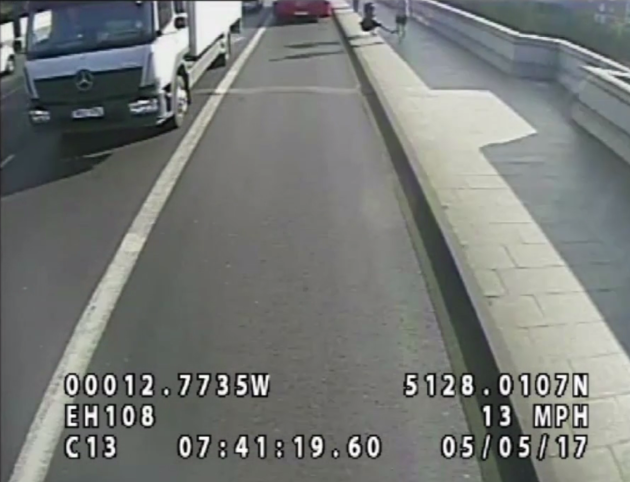 The 33-year-old victim can be seen at the top of the image, falling after being pushed by the jogger.

The bus stopped and passengers got off to help the woman, who received minor injuries from the incident.

Police said the jogger came back the other way across the bridge 15 minutes later and the victim tried to speak to him, but he did not acknowledge her and carried on jogging.

“The victim was put in extreme danger when she was knocked into the road. It was only due to the superb quick reactions of the bus driver that she was not hit by the vehicle,” commented sergeant Mat Knowls, the investigating officer.

“We are keen to speak to the jogger in the CCTV about what happened that morning. We would urge him or anyone who recognises him to get in touch with us as soon as possible.”

Read: Appeal for witnesses after man in his 20s dies in car crash in Mayo>

Read: Fresh appeal for witnesses following death of boy (6) who was hit by van in Dublin>