A MAN WHO set fire to a Dublin apartment complex, causing €1.25 million in damage and leaving 25 people temporarily homeless, was “out of his mind” on drugs and alcohol, a court has heard.

McGovern, with an address in Shangan Terrace, Ballymun, Dublin, pleaded guilty to one count of arson causing damage to a number of apartments at Station Hill apartment complex at Clongriffin and to one count of assault causing harm to his partner Grainne O’Brien on 1 November last year.

He will be sentenced on 27 October.

Garda Alan Roche told Ronan Kennedy BL, prosecuting, that McGovern and O’Brien, who had a tumultuous relationship, were drinking heavily throughout the bank holiday weekend.

On the Tuesday morning after the weekend, O’Brien woke up in her apartment in the Station Hill complex to see McGovern throwing a hoover at her face. He then jumped on the bed and started punching her in the legs.

McGovern left the apartment shortly afterwards and went to the Travelodge in Ballymun where he continued to drink alcohol and took controlled drugs. 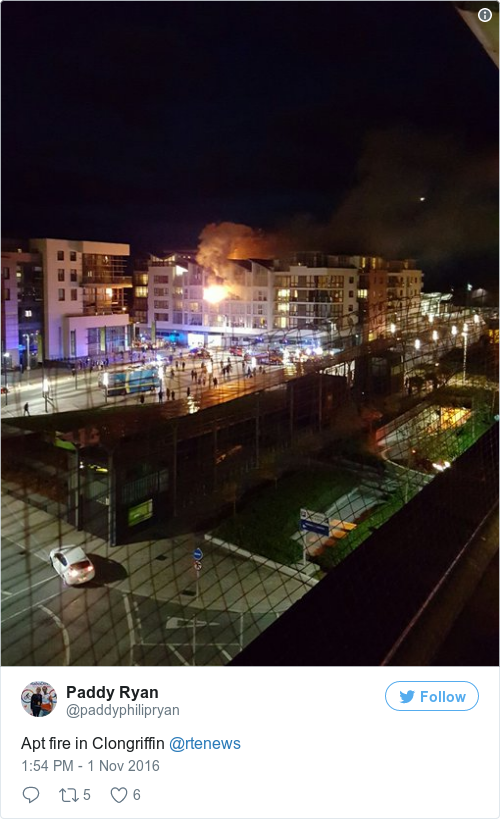 Grainne O’Brien’s ex-partner came to the apartment that afternoon, bringing their young child with them. He said O’Brien had a black eye, split lip and was missing a tooth.

While he was there, McGovern returned to the apartment in an “agitated state”, the court heard. He threatened to fight O’Brien’s ex-partner, causing him to flee the building. O’Brien left shortly afterwards, leaving her son in the apartment with McGovern.

She ran to a neighbour’s home and asked her to call gardaí. Her son left the building shortly afterwards and joined his mother in the neighbour’s house.

O’Brien then saw her apartment was “orange and on fire”, the court heard before she saw McGovern on the other side of the nearby train tracks yelling, “Look at your gaff Grainne, I’m after setting it alight”.

McGovern caught a train to Raheny, where he was witnessed acting erratically and scraping a knife off the metal chairs at the station. He was arrested at the scene.

When questioned by gardaí, he initially blamed the fire on his partner and her ex-boyfriend. He has 25 previous convictions including theft, public order offences and escaping from custody.

The court heard 14 fire trucks were called to the scene of the fire, which took four-and-a-half hours to get under control. All of the residents were evacuated and no-one was injured. Six homes were completely destroyed and others were badly damaged due to water. 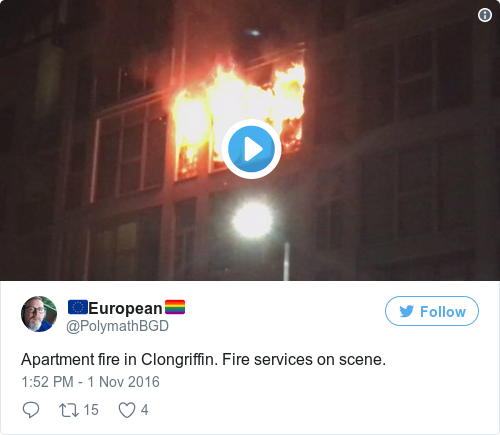 A victim impact statement from the building owner, Jim Gannon, said the damage to the property amounted to €1.25 million.

Twenty-five people, including children, were left homeless for some time after the fire, including a family with a young child suffering from cancer. A number of victim impact statements were handed into court outlining the distress and financial hardship the fire caused to the occupants.

One man, a single parent, described how he and his daughter lost all their furniture. He said his daughter was deeply affected and distressed by the fire and it took them months to get their lives back on track.

Another woman described how she experienced depression and anxiety as a result of being made homeless.

Sean Guerin SC, defending, said his client failed to take his prescribed anti-psychotic and anti-anxiety medication in the days leading up to the incident. He said that, along with the alcohol and drug consumption, led to a “cocktail of reasons” why McGovern was “out of his mind”.

He said as a result, McGovern did not realise the extent of damage the fire would cause to the building.

He handed up a letter of apology from his client, in which McGovern described the fire as the “worst mistake of my life”.

“If I could turn back the clock, I would,” he said. He described his actions as “completely irresponsible and unacceptable” and extended his apologies to the affected residents.

McGovern had a troubled childhood and came from a “chaotic, disordered, volatile and physically violent background”, Guerin said.

He left school at the age of 15 and went “off the rails”. He has been in custody since the incident and was responding well to the regime in custody. He was now drug-free and eager to continue making progress, Mr Guerin said.

The court heard O’Brien had been visiting McGovern in prison and gardaí believed that had the matter gone to trial, she would have withdrawn her cooperation in relation to the case. McGovern’s guilty plea carries extra weight as a result, the court heard.

Judge O’Connor adjourned the matter to get a probation report, noting it was a “very serious offence”.