IT WAS A game that doubled up as a leaving do, the last time CJ Stander, James Cronin and Tommy O’Donnell will play at Thomond Park, their parting gift the delivery of a bonus-point victory which sends Munster top of their Rainbow Cup conference.

Who would have thought this after 29 minutes? Munster had played miserably up until this point, Cardiff brilliantly. Then everything changed with a flick of a switch. From being comprehensively outplayed, Munster rediscovered their form, scoring three unanswered tries between that moment and half-time, tricking us into thinking the complexion of this match had changed for good.

It hadn’t. Cardiff would unexpectedly come back in the third quarter; Munster inexcusably falling asleep before they put together a spirited move in the 75th minute, Keynan Knox creeping across the line after great work by Peter O’Mahony and Gavin Coombes in the build-up.

There was still enough time for Cardiff to put together a rolling maul that was initially heading towards the Munster line before ending up in a cul de sac. Munster survived that and then the sequel, a 23-phase attack from Cardiff that saw them flirt with the idea of scoring without ever looking like embracing it.

A captain’s challenge from Stander resulted in referee Andrew Brace blowing his full-time whistle on a technicality.

So, Munster won. A place in the final could be theirs if Treviso mess up in their final two games.

For Stander, Cronin and O’Donnell, this was a strange way to say goodbye, Thomond Park empty of everything bar the echoes and the ghosts. Yet you can’t say they didn’t leave their mark. 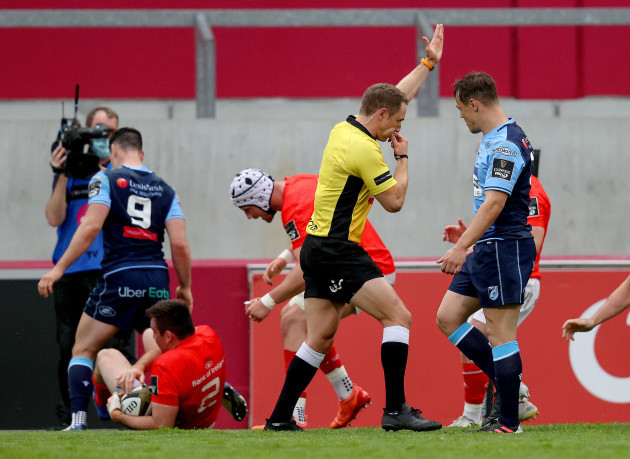 Between them, Cronin and O’Donnell forced the turnover on half-way that caused the first major shift in the game’s pattern, Niall Scannell ultimately scoring from this theft of possession. But prior to then, when Munster were at their worst, Stander was always leading, always in the thick of it with his thirst for work.

That’s how it is with CJ.

He was the club’s best No8 since Denis Leamy but he could put in a shift at blindside, too. No one noticed the difference. It was like noticing if Daniel O’Donnell was capable of drinking tea with an auld wan.

Gavin Coombes is his heir. You get the same have-a-go attitude from him, too. Seeing Coombes come off the bench last night was like watching a passing of the torch, the 23-year-old forcing the turnover that led to Knox’s winning try.

Given this context, this emotion, you’d swear that Cardiff Blues never had a chance. Yet they ripped up the script in the opening quarter, scoring a converted try from their second attack – Tomos Williams with the finish, Jarrod Evans and Willis Halaholo with the creativity – before Evans added a penalty shortly after. 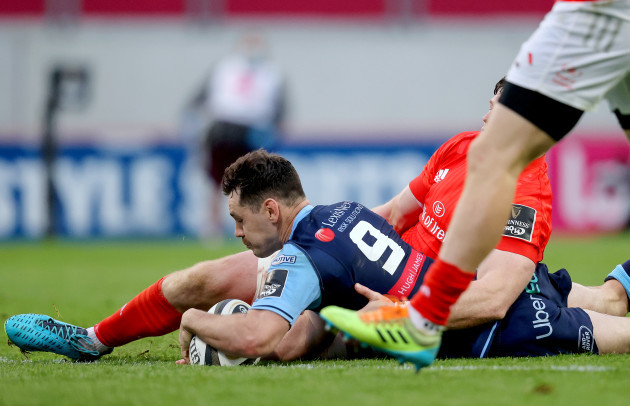 On this night, that was as far in front as they could get. Just when they seemed to be in reach of a place in the Rainbow Cup final, they ran into Munster on a mission.

After that abysmal opening, Munster correctly identified where Cardiff were strongest and concentrated on nullifying their threat at the breakdown. O’Donnell came to life, so too Jack O’Donoghue; Stander, of course, didn’t need any oxygen.

Showstopper to the last, he departs with a fine display to his name. Apart from seeing his emotion at the end, the game’s abiding image was the sight of Niall Scannell diving low across the line for the opening Munster try on 28 minutes, one that stemmed from a well-executed driving maul.

A couple of minutes later, Munster had another try; the line-out again their source of possession, the play switching quickly to Damien de Allende this time, who’d appeared in the line-out before subtly getting himself in a bit of space to attack the Cardiff line. James Botham held him up but Craig Casey appeared on the scene, saw Fineen Wycherley was free to his right and delivered the pass that made a score inevitable. Carbery added both conversions.

Before half-time he was converting a third, another maul, Jean Kleyn with the take this time, Scannell again with the finish. Munster 21-10 Cardiff, half-time.

At this stage Cardiff didn’t need a team-talk but a Priest.

They were in that much bother.

Dai Young listened to their confession and set about changing things.

It worked. Within 15 minutes they were level again, when Tomos Williams got his second try, a brilliantly worked move that involved Evans inevitably before the scrum half timed his run perfectly to seize possession just before the line. Evans converted and the gap was down to four.

Carbery almost immediately got it back up to seven with a well-taken penalty before Lloyd Williams, on for his namesake, Tomos, at scrum-half, did a fairly good impression of the starting nine, running a clever support line to get on the end of Josh Turnbull’s pass. Evans converted, the scores were level.

On 70 minutes, Cardiff went in front for a second time – Evans with the penalty before Munster replied, Coombes with the steal, O’Mahony with a fine run, Knox with the finish. It may not have been the perfect way to say goodbye but Munster won’t grumble. This was one they could easily have lost.