RORY MCILROY LIVED to fight another day at the British Open after recovering from a shocking start to his first round at Royal Birkdale to shoot a one-over-par 71.

There were big question marks surrounding McIlroy’s form coming into the championship after he failed to make the cut on the links at either the Irish Open or the Scottish Open in the build-up to this week.

And he promptly found himself in desperate trouble as he slipped to five over par after bogeying five of the first six holes.

But the world number four dug deep and steadied the ship before climbing his way up through the field on the back nine with four birdies.

That included two in a row at the 17th and 18th to leave him in a better frame of mind ahead of the second round, when wet and windy weather is forecast.

“I was thinking, ‘geez, here we go again’ but I just needed to stay patient and stay with it,”  said McIlroy. ”I didn’t get angry out there at all. I didn’t let my head drop too much. So I kept a good, positive attitude. And it turned around for me, thankfully.”

It was nice to see the putt on 18 go in and close out today with something really positive.

“With the weather we’re expecting tomorrow [Friday], I still feel I’m in the golf tournament. If I can go out and play a good quality round of golf in the morning and try to get in the clubhouse somewhere around even par, under par, I’ll still be around for the weekend.” 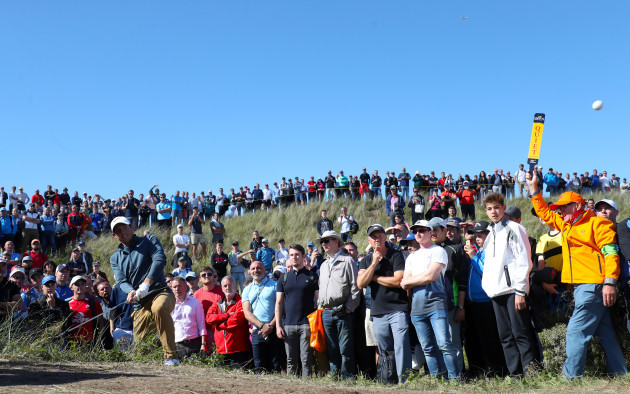 McIlroy hits a shot on the eighth.

Open champion in 2014 at Hoylake and a four-time major winner, McIlroy admitted it took some strong words from his caddy JP Fitzgerald to help him recover.

“JP, he reminded me who I was, basically. He said, ‘You’re Rory McIlroy, what the fuck are you doing?’ I said, ‘Yeah’. At that point I mumbled and said, ‘Whatever.’

But it did, it helped. It definitely helped. It kept me positive. So he did a great job.”

McIlroy even sought to draw comparisons between his turnaround and Europe’s comeback to win the Ryder Cup in 2012 in the so-called ‘Miracle of Medinah’.

“I could be standing here and hit 18 greens and shot one-over and missed every putt and feel terrible. But because of the way I started, I actually feel really positive.

“It’s a bit like the Ryder Cup at Medinah in ’12. We’re 10-6 down on Saturday night but we feel like we were right in with a chance, because we won the last two points. It’s sort of like that.

“Even though there’s a lot of golf left, in other circumstances it might have been a disappointing day. But just with the way I finished, I feel really good about it.”

McIlroy is back out with world number one Dustin Johnson and former Masters champion Charl Schwartzel on Friday.

Spieth joint leader after first round of The Open as McIlroy bounces back with late rally
Cardigans, ties and hi-tops: Thomas and Day have got people talking at the Open