Officers said that this is one of a series of such checkpoints carried out in recent weeks and that the practice will continue for the rest of the summer.

They said five taxis were detected for the offence of not using the shortest route. This carries a maximum fine of €2,500 on conviction. Two other drivers were fined for overcharging their customers – both were issued a fixed charge penalty notice which carries a €60 fine. 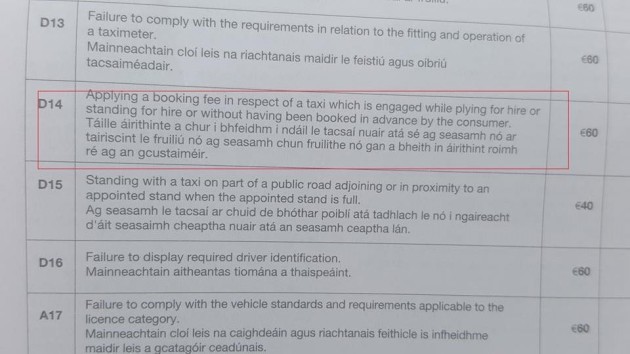 The legislation under which the taxi drivers were fined.

A garda spokesman said: “During a similar checkpoint last week, six taxis were detected for failing to use the shortest route and and three for overcharging. Gardaí wish to stress that the vast majority of taxis stopped were fully compliant with the legislation.

“Customers were urged to use the Driver Check App to ensure that the taxi driver and also the vehicle are properly licensed.”

Read: Spanish airline ordered to stop making prospective employees take pregnancy tests >
Read: ‘Every error that is made is to the detriment of Sgt McCabe. There isn’t an error in his favour’ >