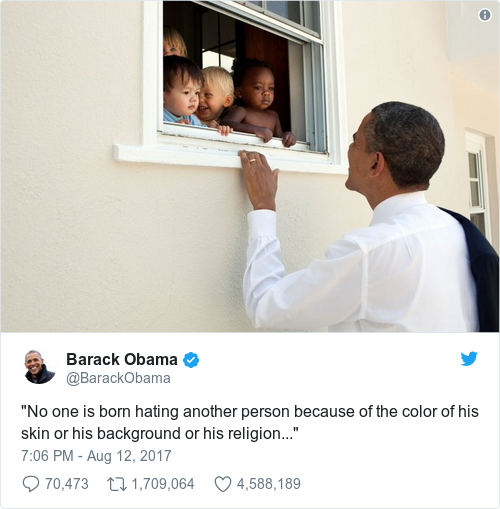 "No one is born hating another person because of the color of his skin or his background or his religion…" pic.twitter.com/InZ58zkoAm

A TWEET FROM Barack Obama in the wake of the violence in Charlottesville, Virginia, at the weekend is now the most liked post of all time on the social media network.

“No one is born hating another person because of the color of his skin or his background or his religion,” Obama said in the message, quoting the late South African leader Nelson Mandela, and it has been liked almost three million times so far.

The tweet struck a chord after the events at the weekend, which saw one woman killed and many injured after a car was driven by a suspected white supremacist into a crowd.

Protesters had gathered in the town to hold a counter-demonstration against white supremacists, KKK members and neo-Nazis who were holding a protest of their own against the removal of a Confederate statue.

For love comes more naturally to the human heart than its opposite. 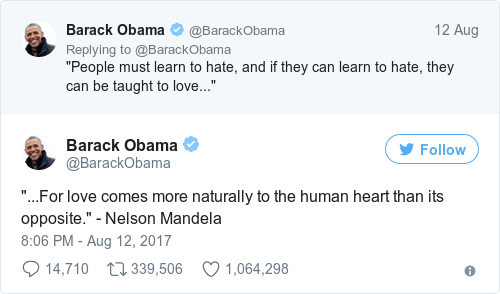 "…For love comes more naturally to the human heart than its opposite." – Nelson Mandela

Obama’s response is being contrasted sharply with that of his successor, Donald Trump, who was under fire for refusing to explicitly blame white supremacists for the violence in Charlottesville.

Trump doubled down on this refusal to single out one group yesterday at a press conference.

“There are two sides to a story,” Trump told reporters, adding that two groups of people had attacked each other with bats.

What about the alt-left coming at the alt-right swinging clubs in their hands?

When asked why he waited until Monday to explicitly condemn hate groups present in Charlottesville, Trump said he wanted to be careful not to make a “quick statement” without all the facts.

“If the press was not fake and were honest, the press would say that what I said was very nice,” he said.

Obama’s tweet urging unity and togetherness replaces the previous most-liked tweet of all time, which was from singer Ariana Grande earlier this year, where she said “from the bottom of my heart, I am so so sorry” in the wake of the Manchester attack.

Read: Donald Trump doubles back – says there was ‘blame on both sides’ at Virginia