WHEN DUBLIN OLDSCHOOL first hit theatres in 2014 it was met with widespread acclaim.

The play – written by and starring Emmet Kirwan (Sarah and Steve; Heartbreak) – follows would-be DJ Jason (Kirwan) through a drug-fuelled weekend odyssey along the streets of Dublin.

Jason works in a record shop in the city centre. He has plans to be a top DJ but loves going on the session at the weekends: taking drugs, going to clubs and raves and generally just overdoing it.

The play follows Jason along his path of hedonism and self-destruction as he navigates through the weekend. Along the way – in between raves, drug busts and longing for his ex-girlfriend – Jason meets and reconnects with his estranged older brother Daniel (played by Ian Lloyd Anderson), a homeless drug addict. 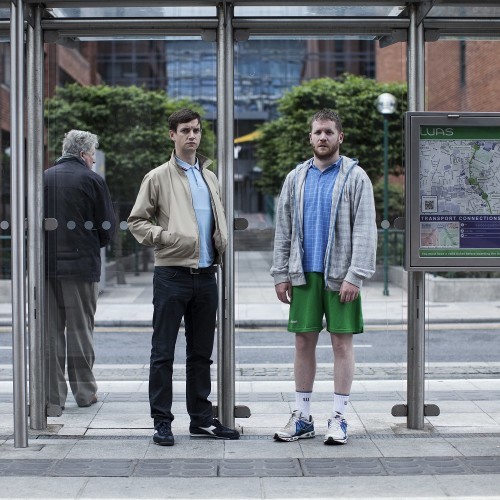 Kirwan (left) and Anderson (right) in the promo for the Dublin Oldschool play.

The play was notable in that Kirwan and Anderson were the only two actors occupying a completely bare stage. Dublin – and an entire cast assorted, well-sketched characters – is brought alive by Jason’s quickfire narration and the words and actions.

Fast-paced, descriptive poetry carries the audience along for a wild ride that is both a celebration of youthful hedonistic drug culture and poignant tale about family breakdown the dangers and sadness of addiction.

Fast forward three years later to this week and Kirwan and a cast of youthful actors were wedged into Anseo bar on Camden Street, along with a full production team.

TheJournal.ie got a behind-the-scenes look as shooting has commenced on a movie version of Dublin Oldschool, which will film in locations across Dublin and Wicklow for four weeks. 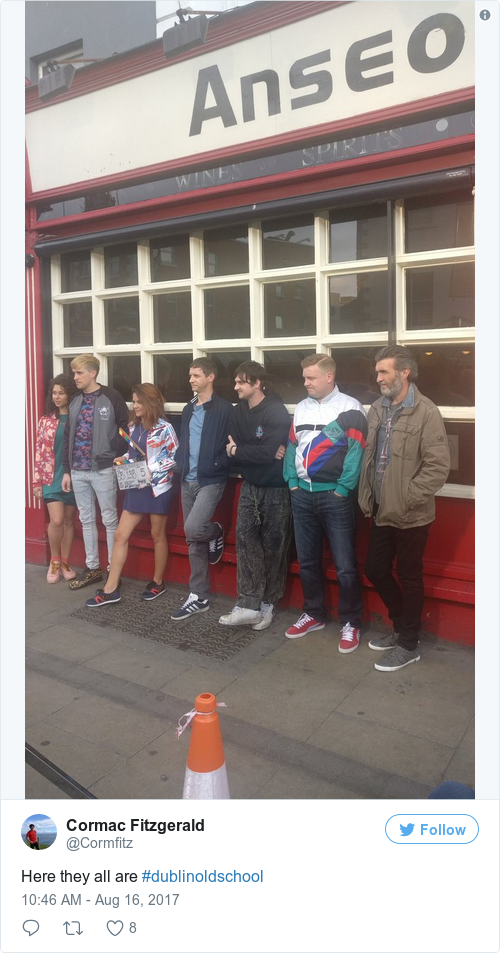 From play to movie

Kirwan and Anderson reprise their roles as the two lost brothers, but alongside them now will be a full cast each playing one of the excellent side characters.

These are people like Dave “The Rave” – a posh sounding Dublin drug dealer with a one track mind for getting out of his mind.

The side acts are all brought brilliantly to life by Anderson onstage, and – aside from the strong emotional centre of the brothers’ relationship – provide the play with its best moments. 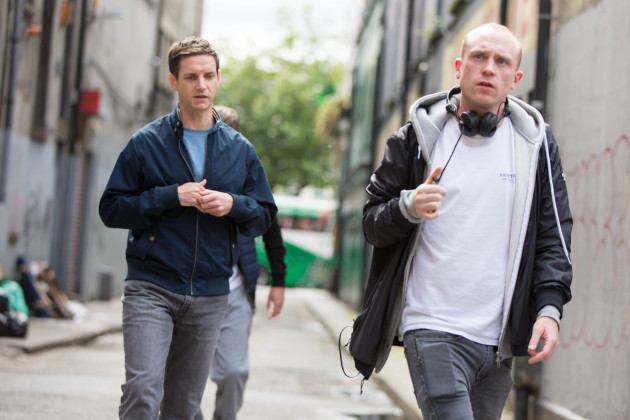 It will be interesting to see how the ensemble cast adapt and make each character their own.

The movie is directed by Dave Tynan (who co-wrote it), a longtime collaborator with Kirwan.

The men’s partnership won much attention earlier this year for the short spoken word film Heartbreak – which was written and performed by Kirwan and directed by Tynan.

The video tells the story “Young One” (played by Jordanne Jones) – a young teenager who becomes a mother and encounters hardship and hypocrisy as she raises her child.

Heartbreak went viral and won acclaim for both men, with Kirwan’s words “To stand in awe of mná” becoming a rally cry for the women’s rights movement and the Repeal the Eighth campaign.

Tynan and Kirwan also collaborated on the excellent Just Saying spoken word video way back in 2012, when the recession still seemed like it was many years from ending.

Just Saying – written and directed by Tynan and performed by Kirwan as he walks through Dublin at night – may give a glimpse into what the pair are looking to accomplish with Dublin Oldschool.

Here we have the same themes of a lost youth culture, references to weekends of drink and drugs, and the whole thing underpinned – as Dublin Oldschool is – by a deep but conflicted love of Dublin city and all that goes with it.

With a budget this time of €1 million from the Irish Film Board and Windmill Lane Studios, the duo will have a bit more scope to expand on and convey their vision in the feature length film.

The movie is bound to differ in many ways from the play, and is Emmet Kirwan’s first feature length film. Speaking to the press outside Anseo this week, he was confident about pulling off the translation from stage to screen.

“I don’t want to give too much away but we’ve kind of distilled the essence of the play into the film script,” he said.

“You get to show all the things that you’ve only talked about.

The good stuff in the play will still be in the film – especially the words.

Distribution and sales for Dublin Oldschool are handled by Element Pictures and the film is due for cinema release in 2018.

Read: VIDEO: ‘I’ll never catcall, I’ll treat and respect and help create an Ireland that will stand in awe of all mná’

Read: ‘When a working class person writes, you’re asked: Is it like Roddy Doyle?’