OVER 80,000 SOULS packed into Croke Park this afternoon but for long spells you could hear a pin drop, such was the paucity of the spectacle on show. 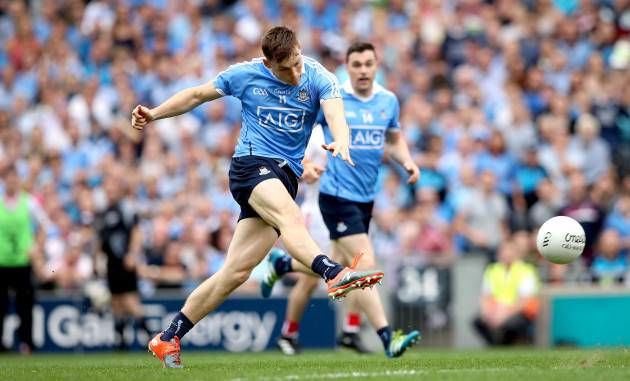 First things first. Dublin are into the All-Ireland final, with Mayo the only obstacle between them and a third title in succession.

Mickey Harte watched his defensive structure picked apart by Dublin, who strangled the life out of this game with a cold, clinical display.

Dublin happily cut their cloth to suit the opposition. Go defensive and they’ll play keep-ball, grind you down and carefully work scores. Leave yourself open at the back and they’ll rip you to threads.

Tyrone opted for the former, but there’s no keeping out this formidable forward unit, no matter how many bodies you have back. Dublin made over 300 hand-passes and held onto possession for lengthy spells. It almost seemed like a different sport to the Kerry-Mayo game 24 hours earlier.

The decibel levels peaked late on when Diarmuid Connolly was summed from the bench for a run out in the 69th minute, but the game was long over by that stage. Con O’Callaghan’s star continued to rise and he bagged 1-2 as well as giving the final pass for Eoghan O’Gara’s goal four minutes from time. 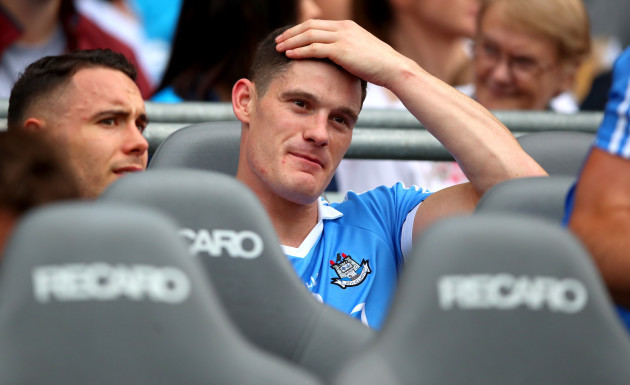 In the end, the only surprising thing was that Bernard Brogan and Michael Darragh Macauley failed to make an appearance off the bench. They didn’t need them with O’Gara, Kevin McManamon and Paul Flynn (0-3) in devastating form.

Peter Harte’s penalty, which was saved by Stephen Cluxton, in stoppage-time summed up Tyrone’s day. In what could be his final game in a Tyrone jersey, Sean Cavanagh was substituted after an ineffectual 55 minutes. It was nothing close to the the farewell he’d have dreamed of.

Dublin had Cian O’Sullivan and Jonny Cooper as spare defenders protecting the full-back line, although they were never really tested.

Tyrone needed a lead early on to put doubt in the minds of their opponents, but the Dubs were far too streetwise for that to happen. They patiently worked the ball from side to side, probing for an opening which inevitably arrived. 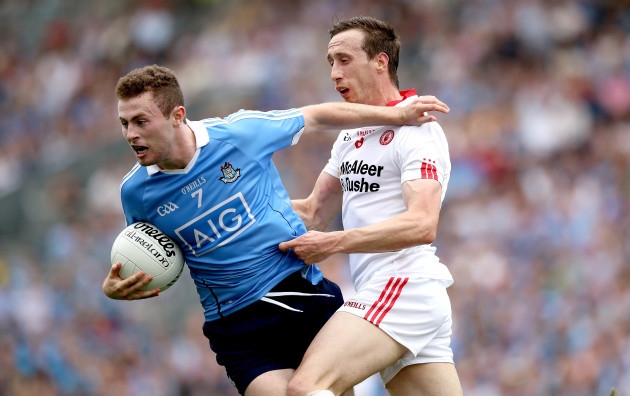 The game was barely three minutes old when O’Callaghan knifed past three Tyrone defenders and smashed the ball past Niall Morgan. It gave Dublin confidence and was precisely what Mickey Harte would have wanted to avoid early on.

Paddy Andrews and Kilkenny picked off good scores from distance, while O’Callaghan highlighted his class with two fine points. Tyrone had just 0-3 from play in the board by the half.

The numbers made for good reading for Jim Gavin’s side at half-time, where they led by 1-9 to 0-5. They did an excellent job of not bringing the ball into contact and were turned over just seven times, while Stephen Cluxton found the target with every single one of his kick-outs in the opening 35 minutes.

Of the four occasions they forced Morgan into a long kick-out, Dublin came away with possession three times.

The second-half was merely a formality as Jack McCaffrey bombed forward time after time.

Flynn slotted over three excellent scores, Rock clipped over a trio of placed balls, while O’Gara dispatched a goal after a great move involving Lowndes and O’Callaghan.