THE WHITE HOUSE has struggled to defuse the growing criticism of President Donald Trump’s initial failure to explicitly condemn white supremacists for their role in the violent protest on Saturday in Virginia, insisting that his condemnation included all such groups.

A woman died and 19 people were injured in the city of Charlottesville when a car ploughed into a crowd of people after a rally by Ku Klux Klan members and other white nationalists turned violent. Two state police officers died in a helicopter crash near the area.

A full day after the violence erupted, and after an initial statement in which Trump made no mention of white extremism, a White House spokesperson issued a statement saying, “The president said very strongly in his statement yesterday that he condemns all forms of violence, bigotry and hatred.

Of course that includes white supremacists, KKK, neo-Nazi and all extremist groups.

In an appearance on Saturday at his golf resort in Bedminster, New Jersey, Trump faulted “many sides” for the violence. He made no mention of the far-right militia groups involved in the Charlottesville melee, some of whom were wearing Trump hats or t-shirts. 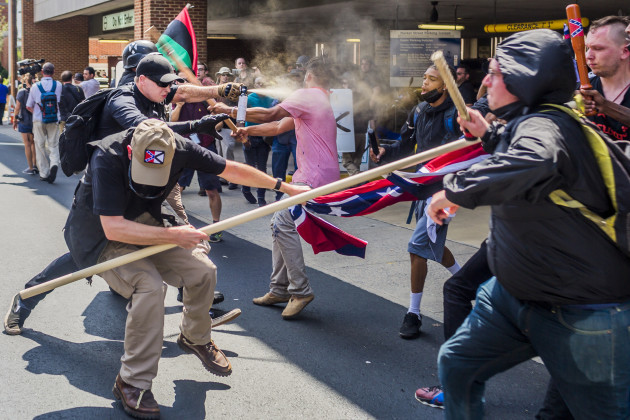 Clashes between groups in Charlottesville at the weekend

Vice President Mike Pence, meanwhile, specifically condemned the hate groups by name when asked to respond to the events in Charlottesville.

“We have no tolerance for hate and violence from white supremacists, neo Nazis or the KKK,” Pence said yesterday at a news conference in Cartagena, Colombia, where he was on the first leg of a Latin American tour.

These dangerous fringe groups have no place in American public life and in the American debate, and we condemn them in the strongest possible terms.

But he also defended Trump, saying the president “clearly and unambiguously condemned the bigotry, violence and hatred” on display in Charlottesville. Pence chided the media for what he called its stronger focus on Trump’s words than on those who perpetrated the violence.

White House homeland security adviser Tom Bossert told Fox News Sunday that “I think you saw the president stand up very clearly and not only denounce it, but rise to a presidential level of calling for a counter-message of love and dignity and respect for fellow human beings”.

But the Charlottesville mayor, Michael Signer, laid much of the blame for the violence directly at the president’s feet, saying in an impassioned appearance on CBS that Trump had created an atmosphere of “coarseness, cynicism (and) bullying”.

“He made a choice in his presidential campaign, the folks around him, to go to the gutter, to play on our worst prejudices,” Signer, a Democrat, said.

Many Republicans joined in the criticism of Trump, including former presidential aspirants Senators Marco Rubio and Ted Cruz.

Another Republican, Senator Lindsey Graham, told Fox News Sunday that “I would urge the president to dissuade these groups that he’s their friend”.

Their cause is hate.

Even the man who was briefly the White House communications director, Anthony Scaramucci, had critical words for Trump’s original response.

“I wouldn’t have recommended that statement,” he said on ABC. “I think he needed to be much harsher as it related to the white supremacists.”

Trump’s daughter, Ivanka Trump, issued a tweet early yesterday that included the sort of language some people said her father should have used on Saturday.

“There should be no place in society for racism, white supremacy and neo-Nazis,” she tweeted.

1:2 There should be no place in society for racism, white supremacy and neo-nazis.

When Trump was asked on Saturday in Bedminster whether he wanted the support of white nationalists, he ignored the question.

Charlottesville remained tense yesterday. Jason Kessler, a far-right blogger who had organised the “Unite the Right Rally,” attempted to hold a news conference in front of city hall, but was confronted by a hostile crowd, spat on and tackled by a protester, US media said. He left the scene under police escort. 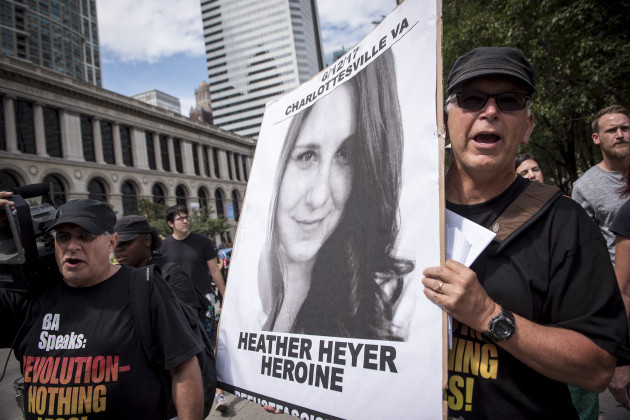 At Trump Tower in Chicago, man bears a placard of Heather Hayer, the woman who died in the Charlottesville attack

Of the 19 people who were hurt on Saturday in the car ramming, 10 remained hospitalised in good condition and nine had been released, the University of Virginia Health System said.

Virginia Governor Terry McAuliffe, who had declared a state of emergency even before the far-right rally officially got underway, attended a prayer event yesterday and called on lawmakers to speak out forcefully against hate.

“We got to call it out for what it is. It is hatred, it is bigotry and our leaders got to be very frank, unequivocal. We will not tolerate that in our country,” he said.

Trump is expected to hold a news conference today in Washington at which he will almost certainly be questioned on his response.

Read: Charlottesville mayor: Killing of woman was ‘terrorist attack with a car used as a weapon’