ONE PERSON HAS been killed and 19 injured after a vehicle plowed through a group of counter-protesters today following a white nationalist demonstration in the small city of Charlottesville in the US state of Virginia. 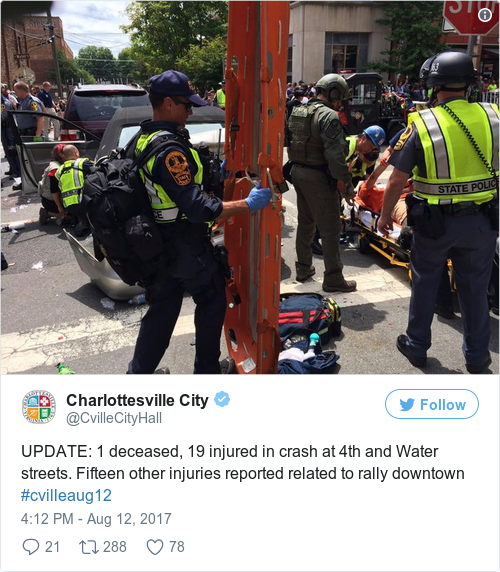 City mayor Mike Signer said he was “heartbroken” at the loss of life.

“I am heartbroken that a life has been lost here. I urge all people of good will–go home,” the mayor tweeted.

I am heartbroken that a life has been lost here. I urge all people of good will–go home.

Earlier, police broke up the demonstration after a number of violent altercations took place.

Missiles were thrown and crowds clashed at various points throughout the day.

Thousands of white nationalists, including supporters of the Ku Klux Klan white supremacist group, and anti-fascist activists were expected to turn out in Charlottesville, a sleepy town planning to remove a statue of General Robert E. Lee, who led Confederate forces in the US Civil War.

Footage emerged earlier of militias arriving in the city, and scuffles breaking out between protesters and counter-demonstrators. 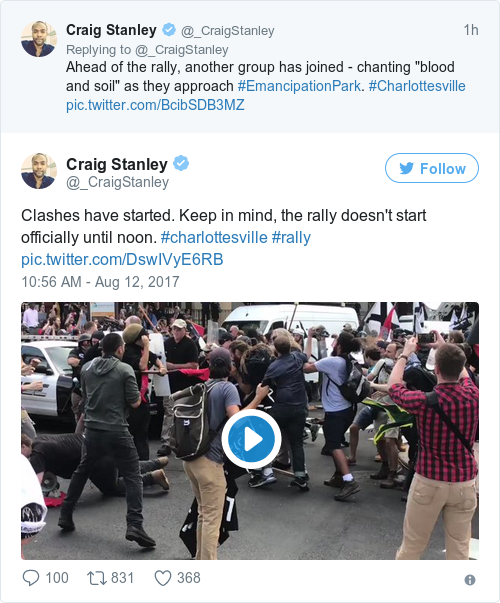 US president Donald Trump tweeted that that people must unite and condemn “all that hate stands for”.

“We ALL must be united & condemn all that hate stands for. There is no place for this kind of violence in America. Lets come together as one!” The president said.

There were a number of instances of violence in the city this afternoon, with police dispersing the crowd following clashes.

Other footage shows people clashing in the town, with violence breaking out among protesters and counter-demonstrators. 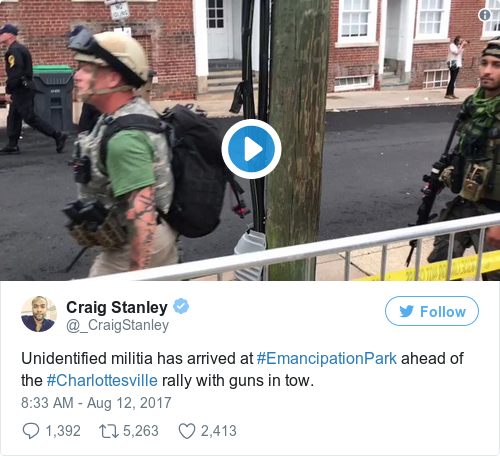 Unidentified militia has arrived at #EmancipationPark ahead of the #Charlottesville rally with guns in tow. pic.twitter.com/zCLCBU78PF

Last night, a large group of torch-bearing white nationalists marched through the University of Virginia campus.

There were reports of violence breaking out between them and counter-demonstrators.

The National Guard was put on alert because of the risk of violence during the “Unite the Right” rally, which is due to kick off at 12 noon local time (5pm Irish time). 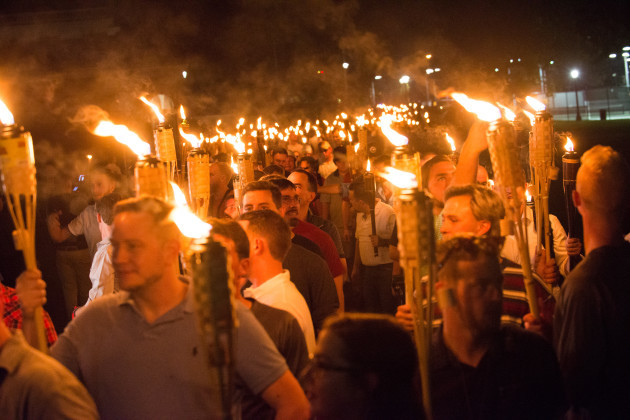 White supremacists take part a the night before the ‘Unite the Right’ rally in Charlottesville.

Warning to stay away

Last night, Virginia’s governor urged people to stay away from the planned rally.

“I want to urge my fellow Virginians who may consider joining either in support or opposition to the planned rally to make alternative plans,” Governor Terry McAuliffe said in a statement.

McAuliffe, a Democrat, said many of the people at the rally will “express viewpoints many people, including me, find abhorrent. As long as that expression is peaceful, that is their right.”

He said he had given security forces instructions to act quickly and decisively if violence breaks out.

Units of the Virginia National Guard will be placed on stand-by, he added.

On 8 July a few dozen Ku Klux Klan marchers gathered in Charlottesville to protest plans to remove the statue of Lee. But they were outnumbered by hundreds of jeering counter protesters.

This time the extreme right hopes to have a stronger showing thanks to the presence of various leaders of the “alt-right” movement that has been emboldened by Donald Trump’s ascent to the White House.

Read: Rio nightlife is suffering due to surge in robberies