PICTURES HAVE EMERGED of members of a flute band dressed up as Hitler at an Orange Lodge in Scotland.

An article, which appeared in the Sunday Herald in Scotland this morning, features a number of images of past fancy dress competitions. The photographs were taken at a number of different Halloween parties dating back to 2010.

The events took place in the Airdrie and District Orange Hall and Social Club in 2010 and 2013.

According to the newspaper, one person arrived at an event dressed as the Pope being hanged. Another painted their face black, wore an afro wig, a straw skirt and bones around their neck.

Another picture carried in the paper shows two men holding a child-size soft toy dressed in a Celtic jersey at their crotches. It is thought they were trying to reference Catholic clergy child sex abuse.

The pictures were posted on the Whinhall True Blues Flute Band page. 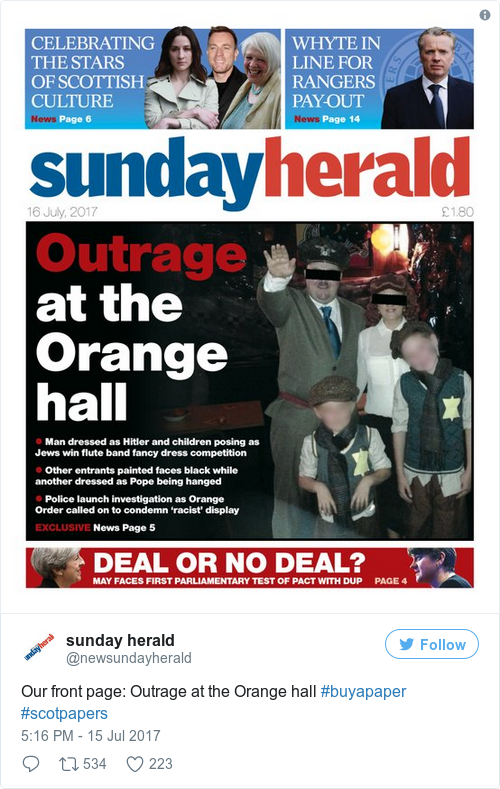 The pictures have been criticised by the Jewish community in Scotland.

Ephraim Borowski of the Scottish Council of Jewish Communities told the Sunday Herald that “the meticulously planned industrialised murder of six million people solely on the grounds of their ethnicity is not a joke”.

He added that racism, including racism against Jewish people must “always be condemned in the strongest terms, and we would urge the Orange Order to do so”.

Anti-sectarian charity in Scotland Nil By Mouth described the images as “breathtaking in their ignorance”.

Spokesman Dave Scott told the paper: “Anyone who thinks it is humorous to dress up like Hitler and have kids appear alongside dressed as Jewish children headed for a concentration camp lives on another planet.”

The pictures have been passed to police in Scotland who said they are investigating the matter.

A statement from the Orange Lodge of Scotland attacked the Sunday Herald for its coverage.

It read: “The Grand Orange Lodge of Scotland is disappointed to note that the Sunday Herald have chose not to cover any of the attacks carried out recently on Orange premises.

“Unfortunately this is not the first time the Herald has failed to treat The Grand Orange Lodge of Scotland and its members in an equivalent manner to how it has treated others.

“The Grand Orange Lodge of Scotland does not seek immunity from media criticism, but surely the Herald has a duty to be impartial or even handed.

“The Grand Lodge executive and learned counsel are currently in the process of examining recent articles to see if there have been breaches of IPSO guidelines.

“We understand that the press has a role to play, but there is a difference between holding to account and pursuing a baseless agenda to attack and demonise our Protestant culture & heritage.

If Orange Order members and friends continue to choose to spend their hard earned money or read news online via the Herald website then it is unlikely anything will change. If we do not, then perhaps those running it will finally realise that we will no longer accept anything other than a fair and balanced coverage of our institution.”

Read: ‘If you go to Pamplona to be chased by a bull, you’re participating in his long, painful death’ >
Read: Man (30s) dies after being found on the street with serious injuries >