OVERNIGHT JOINT LEADER Matt Kuchar survived blustery conditions on Friday to shoot a second-round 71 that left him in a strong position on four under par at the halfway stage at the Open.

The American had ended Thursday in a share of the lead at five-under alongside compatriots Jordan Spieth and Brooks Koepka after a flawless opening 65 that gave him some leeway as the winds blew across the Royal Birkdale course throughout his second round.

Kuchar, a strapping 39-year-old who has never won a major, produced a mixed bag of a round with four bogeys and three birdies and endured a particularly disappointing finish, dropping shots at two of the last three holes.

But he is now set up perfectly to be one of the contenders for the Claret Jug heading into the weekend, while Spieth and Koepka were among those left to face the prospect of more unpleasant weather later on.

“Conditions were really hard today, certainly what we expect coming over here,” said the Florida-born Kuchar, whose best finish in a major to date is tied third in the Masters in 2012.

“It was nearly the opposite wind of what we had yesterday. So the course played completely differently. It was quite a trying, challenging day.”

Scotland’s Richie Ramsay, playing with Kuchar, shot a level-par round of 70 to remain at two-under for the championship, while behind him Rory McIlroy has given himself a chance going into the weekend.

The 2014 Open champion at Hoylake built on his strong finish to his opening round on Thursday, when he shot a one-over 71, to fire a 68 that put him safely in the clubhouse at one under par. 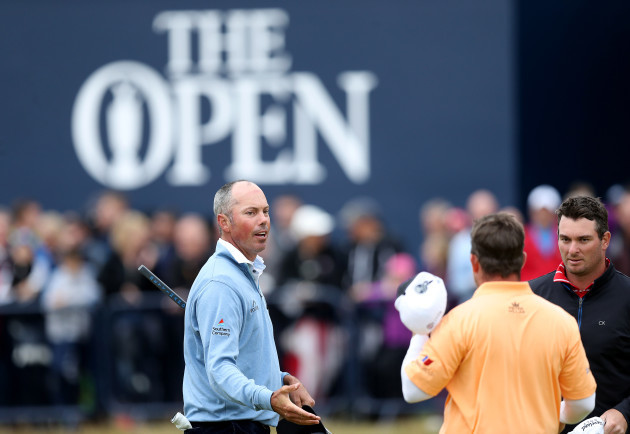 On Thursday McIlroy was five-over through his first six holes — on Friday he was three under par after the same stretch.

There were dropped shots at 13 and 15 but a birdie at the long 17th helped complete a largely satisfactory day for the world number four.

“To be in after two days and be under-par for this championship after the way I started, I’m ecstatic with that,” said McIlroy.

Playing alongside McIlroy, former Masters champion Charl Schwartzel had at one point shot to the top of the leaderboard when he followed his opening round of 66 by claiming a birdie at the short fourth.

But things quickly unravelled for the South African, who had two double-bogeys and five bogeys as he ended up eight-over-par for the day and at +4 for the championship.

Nevertheless, with the projected cut standing at four-over, Schwartzel remains hopeful of making the weekend, as does world number one Dustin Johnson, who is three-over after a 72.

Masters champion Sergio Garcia shot a 69 to move to two-over while his fellow Spaniard Jon Rahm (+3) is another set to make the cut.

The same cannot, however, be said of former world number one Jason Day, with the Australian shooting 76 to sit perilously at five over par.

Last year’s runner-up Phil Mickelson is heading home — he had a disastrous 77 in the second round and is +10 in total.

Booze in sport: blamed too much for defeat and enjoyed too much in victory
One of the Open favorites had a 2-stroke penalty waived in controversial ruling