VICTORIA STATE IS in lockdown. 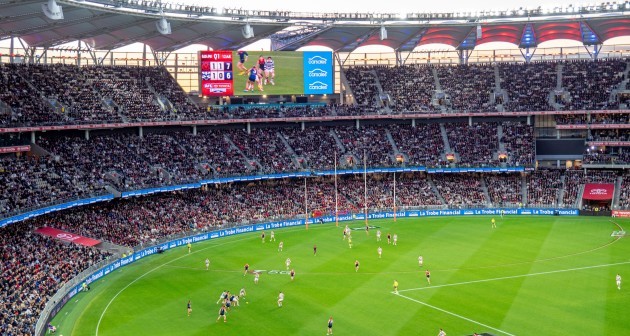 Perth hosts the AFL Grand Final after the game had to be moved from Melbourne.

Melbourne city is crawling with police, the skies teeming with helicopters.

This week there have been daily violent protests, the biggest onshore earthquake in recorded history and the MCG lies empty except for the odd fan outside, passing by to take a picture of statues draped in scarves or a dangling flag.

Not your typical Grand Final week.

Two local teams meet in Saturday’s decider. Melbourne Football Club versus Western Bulldogs. 2021 was supposed to mark an eagerly anticipated return to normal for the home of footy. After enduring a lengthy 2020 lockdown, the AFL was forced to move the Grand Final from its traditional spot for the first time ever.

Instead, it was played in Brisbane, Queensland. This year it is off to Perth in Western Australia. Respective fans are unable to attend due to border closures. Today is a national state holiday. The only cause for celebration is Thursday’s news that they have claimed the unenviable crown of most locked down city in the world.

Stumbling along in the now recognisable global pandemic pattern. It begins with a shared sense of unity and promise of togetherness. Then it inevitably unravels as national division soars and blame is tossed from one significant player to another. 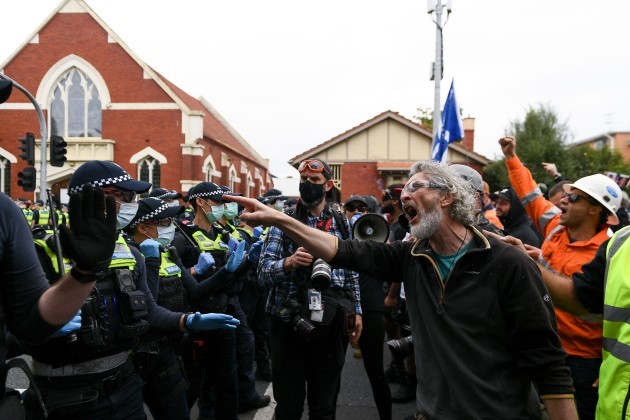 Protesters and police in Melbourne.

As an outsider embedded on the inside, observing Australia’s response has been an eye-opener. The lack of a sense of nation is startling. State premiers spend a nauseating amount of time trading barbs with each other. One big land mass fractured in profound ways. They close their internal borders and deny permits for many trying to travel interstate.

Citizens can’t get home to bury their loved ones. Those seeking urgent medical care have been hindered. Farmers unable to care for their animals. Every single state has comparable anecdotes. Their response is reinforced by a parochial society preoccupied with their own doorstep and little beyond.

Melbourne markets itself as the most liveable city in the world. World class healthcare, education and transportation demonstrate why. Interlocking laneways empower the inner-city’s off-street culture. It was once an integrated, vibrant hub that often operated as the sporting capital of the world, hosting premium tennis, F1, AFL, rugby, cricket and more.

Now that is no longer the case. The city centre is hollow. You come to realise that all that infrastructure was just the electrode that enabled the current. Masses made the town tick. In their absence, it’s lifeless and dead. Lively laneways became sinister alleys. Newspapers and other deliveries visible waist high behind the door of unopened businesses.

Shaken to the core and stripped of its soul.

“Pandemic, protests, an earthquake. Nothing really surprises you anymore. I feel like the Grand Final has nearly been lost, compared to previous years. You see bunting and gates painted as you walk around, like a county final at home, but without the people buzz,” says Meath man Conor Nash.

The Hawthorn midfielder elected to stay in the country for the offseason to resolve permanent residency and remain with his partner.

“It’ll be different, watching the final at home on your own. Not even allowed to go to other households.

“You have to try and enjoy the little things right now; there’s not much else you can do.”

A game day stroll from the city to the MCG was previously one of the positively great pilgrimages. Walk along Spring Street, a human stream running down to the Yarra River. The awesome parliament building on the left, a heaving Cricketers bar accommodating the crowd on the right, unifying to form a guard of honour as you hurtle towards that sprawling landmark.

Now the steps of that constitutional building are where the crowd can be found, and they are daunting. Row upon row of police officer. Some on horses, others in riot gear. The pub across the road is takeaway only.

A shortcut through Fitzroy Gardens formerly offered the sights and sounds of families tailgating. Full alertness was a basic requirement as Sherrins sailed through the air from parent to child. These days that park only facilitates the grass gymnasts and whirling joggers. Individuals operating in isolation rather than a city in harmony.

Where the throngs once merged as the Jolimont train crew met the city travellers is now bare, but still the necropolis of legends. Icons in bronze, the Melbourne faithful draped in red and blue. Towering in front of locked gates.

Folk heroes like Ron Barassi and Norm Smith stand tall near the ground. The best route along that home straight is down the centre path and a quick salute to the Irish trailblazer, Jim Stynes.

The biggest gathering we are likely to witness this week was the hundreds of people congregated in front of apartments on Wednesday. Howling sirens filled the air while all glanced upwards as emergency services investigated whether there was any structural damage after a magnitude 5.9 earthquake struck the north-east.

For Melbourne, this is an opportunity to end a 57-year premiership drought. Former captain James McDonald amassed 251 appearances there. In 2000, several career-best performances helped them to the Grand Final. He missed it due to injury and they lost by 60 points.

McDonald played with Stynes. The stint most celebrated and only a fraction of the Dubliner’s legacy.

“I was thinking about Jimmy this week,” he told me on Tuesday. “He is at the forefront of a lot of minds right now. Firstly, as an ex-player and one of the greatest AFL stories there is. A bloke to come from Ireland and win a Brownlow.

“But what he did for the club after, I wonder is that appreciated? He cleaned it up at its lowest point. In a huge way mate. He and Donny McLardy were the two who came in when the club had five million in debt and got us back in a stable position off field. That takes a lot of time. He started the foundation of where the club is now.

“He was very sick when he was president and did a tower of work. Jimmy is held right up there in the top echelon of Melbourne football club. Only the legends get a statue outside the MCG and he is one of them.” 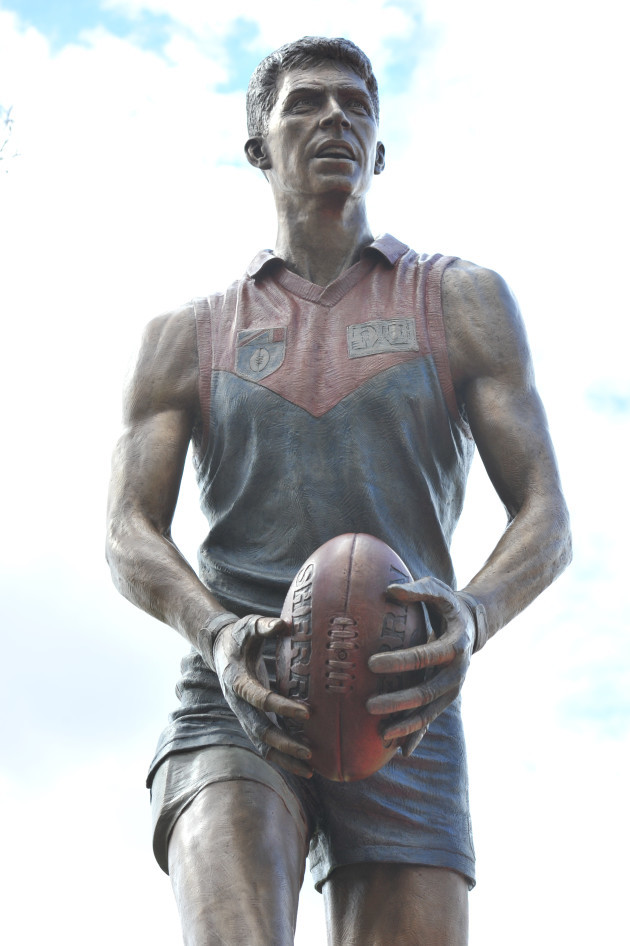 If the Dees are to do it, they need another dominant display from star skipper Max Gawn. His five goals in their preliminary final demolition of Geelong underlined the ruck’s credentials.

He too has endured a long trek to this stage. In his debut campaign, Jim Stynes picked him out in front of the entire footy department and issued a prediction: “this kid is going to do things differently.”

Gawn’s first four years brought successive underwhelming seasons: 12th, 13th, 16th, 17th.
Stynes presented him with the No.37 as a rookie. A few years after the Irishman’s passing in 2012, Gawn would take on the No.11 he made famous.

Jim’s brother, Brian, lives south of the city with his family. This week is one full of mixed emotions. Awash with memories of his own career with the club and of Jim. A picture of Jim’s decorated plaque appeared on Twitter this week. The WhatsApp notifications have been endless since.

His house, as well as their parents, is decked out. That is where they will watch it. The tension is already excruciating.

“It is like being from Mayo, except we haven’t even got close. We are favourites but incredibly nervous,” he chuckles. 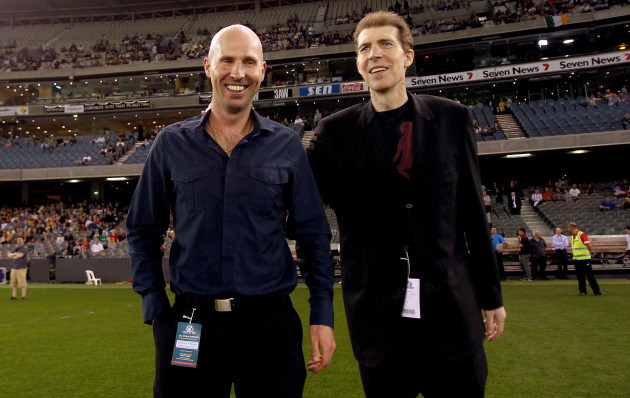 Western Bulldogs endured similar heartache until 2016, when they won a fairytale flag. That season is expertly charted by Martyn Flanagan in the brilliant book ‘A Wink from The Universe.’

In the preliminary final that year they played GWS Giants, an outfit created by the AFL in 2012 as a second Sydney attraction. “Our club was born in blood and boots, not in AFL focus groups,” stated the banner.

The practice wasn’t feasible this year. The Bulldogs were forced out of state midway through the season and spent the rest in enemy territory.

When they landed in South Australia to play Port Adelaide in the preliminary final earlier this month, health officials decided they were not allowed to train in the week prior to the game despite testing negative and not coming from a hotspot.

McGinlay returned with a digital version. 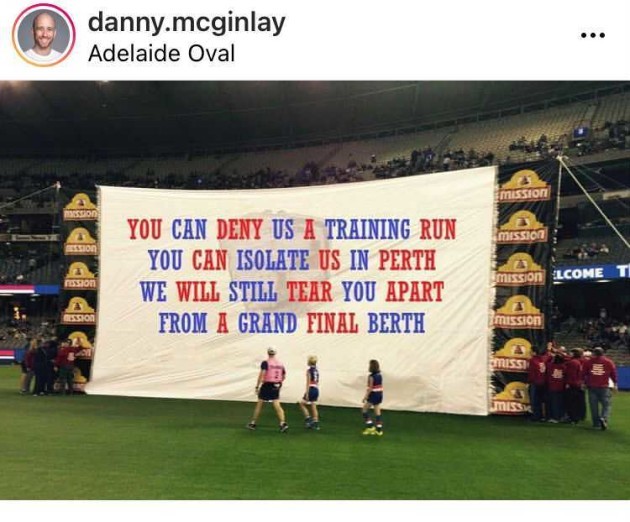 Distinctive colour is still evident in the western suburbs. Animated street art functions as the only meaningful way the natives can demonstrate the remarkable heart of this blue-collar club.

To stop Melbourne, Luke Beveridge’s side will rely once again on young half-forward and Instagram heartthrob Bailey Smith. The 20-year-old kicked eight goals and averaged 23 disposals in three finals.

Brian Stynes’ son, Sam, and Smith are close friends. They played school footy together. Yet there is no threat of a divided household this week.

“Blood is thicker than water.”

Few would begrudge a Demons victory, but the tragic irony is that should it transpire, most of their supporters can’t be there and can’t celebrate it. A loss means one painful week becomes torturous. As for the city, it won’t operate as some divine inspiration, a bolt from the skies that washes away one of the darkest weeks in history. Not even this feelgood story can alleviate the current hole.

Should Melbourne triumph, it will simply exist as another peculiarity. Something few anticipated, unbelievable until it actually happens.

Fitting really, in what is truly the strangest of times.

Bernard Jackman, Murray Kinsella and Gavan Casey look ahead to the inaugural United Rugby Championship, and a massive weekend for Ireland in their bid to qualify for the Women’s Rugby World Cup.