TODAY’S EDITION OF RTÉ’s Morning Ireland discussed a story of a woman who lost a High Court case after a discrepancy was found in her CV.

The woman had told a bank that she had passed maths in her Leaving Cert 20 years previously, but had in fact failed.

The judge found that the woman had made the error unwittingly, but have you knowingly oversold yourself?

We’re asking: Have you ever lied on your CV? 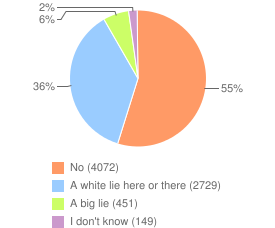