A UK COMPANY IS to trial a semi-automated driving system on public roads next year.

The system, called platooning, will see three trucks driving in convoy and connected via wireless. The lead vehicle and its driver controls the two behind.

The advancement demonstrates the increasing move towards driverless cars with such vehicles already road tested over millions of kilometres.

Experts say automation could mean computers taking control of just some of a car’s driving, or all of it. It’s argued that automated driving would make roads safer.

But are you happy about this?

Poll, Would you feel safer with driverless cars on the road? 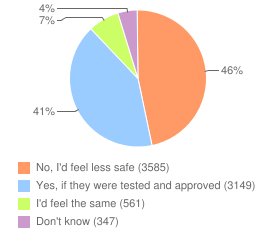