THE PORT DUBLIN in Dublin has reopened after an oil tanker broke down earlier today.

One bore of the Port Tunnel had been closed to traffic because of the broken down tanker.

The disruption was in the northbound bore of the tunnel and one lane was completely blocked.

AA Roadwatch earlier warned motorists that delays were to be expected on approach to the tunnel and in and around the port.

It has since tweeted that a ban on heavy goods vehicles and the tunnel has been lifted. 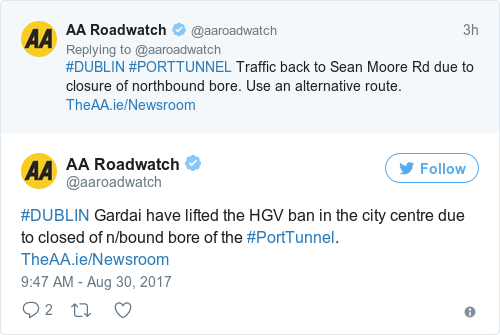 #DUBLIN Gardai have lifted the HGV ban in the city centre due to closed of n/bound bore of the #PortTunnel. https://t.co/pdsEzJTRQr

With reporting from Cormac Fitzgerald

Read: A truck on fire in Dublin’s Port Tunnel has been brought under control >