A PROTESTER WHO was wrestled by the Canadian Ambassador at a 1916 commemoration ceremony in Dublin has been given a chance to avoid a criminal record.

Brian Murphy publicly apologised today in his bid to have his recorded conviction for a public order offence overturned. Judge James O’Donohue said he would be given the Probation Act if he donated €900 to charity and apologised to the garda who arrested him. Judge O’Donohue also suggested he write a letter of apology to Canadian ambassador Kevin Vickers.

Murphy, whose great-great-grandfather served in the British military is buried in the cemetery, was an invited guest at the commemoration. His paternal grandfather had fought in Boland’s Mills in the 1916 Rising and was a republican who entered politics and later became a TD.

The 1916 event at Grangegorman military cemetery was attended by about 30 people including the then Minister for Foreign Affairs Charlie Flanagan as well as the British ambassador Dominick Chilcott and members of Irish and British armed forces and relatives of the deceased.

Vickers, a former Canadian House of Commons sergeant-at-arms, who was appointed as the Ambassador of Canada to Ireland in January 2015, was also present.

He was hailed a hero two after he shot Islamist gunman Michael Zehaf-Bibeau who had killed a soldier at the Canadian House of Commons in Ottawa in October 2014.

Father-of-five Murphy was found guilty following a district court trial last year on a Public Order Act charge of engaging in threatening and abusive behaviour. He had pleaded not guilty but was convicted and received a two-month sentence which was suspended for one year.

However, he launched an appeal in the Circuit Court which came before Judge O’Donohue who rejected defence arguments about right to protest or that the accused had not caused a breach of the peace.

Garda John Cahill told the appeal hearing he saw Brian Murphy stand up in the seated area and go into the courtyard.

He unbuttoned his jacket and brandished a t-shirt saying “Justice for the Craigavon Two”, a reference to republican prisoners and a campaign that they have been wrongfully imprisoned. 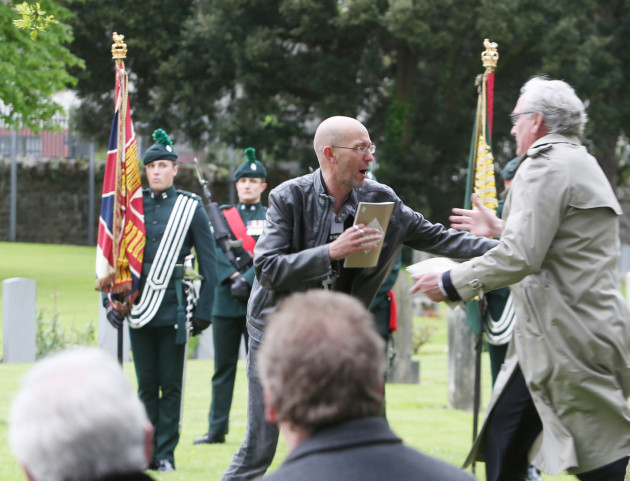 The judge heard how Canadian ambassador Kevin Vickers “wrestled and subdued Murphy” before bringing him over to gardai on duty at the event. Garda Cahill agreed with the defence that after making his protest Murphy was very cooperative. He was handcuffed and taken to Blanchardstown garda station.

Garda Cahill also agreed with Murphy’s barrister Jane MacGowan that the comment he made was the height of it and he had not made any obscene gestures to the graves.

However, he said he believed it was Murphy’s intention to stop the ceremony and what he did was insulting to people.

In evidence, Murphy told the court that he had applied to the Department of Foreign Affairs to go the event which he found “objectionable”. He said he stood up and was intent on leaving and went to an open area in front of the seated guests. He said his first words were “this is an insult, we fought for Irish freedom” and he was grabbed by his lapels.

He agreed that he mentioned the Craigavon Two case. He said it was not his intention to insult the people there. He said, “the ambassador intervened and it became a much bigger thing than was expected”.

Judge O’Donohue asked him why he had not set out his objections in writing. Murphy replied that there was “no particular reason”. He denied that he had deluded the authorities to get into the event and said that he did not give them any false facts.

Pleading for leniency MacGowan asked the court to note her client has worked as a youth club manager for 14 years, he has no prior criminal convictions and is law-abiding. He accepts that insult could have been taken, the court was told.

The appeal heard he is involved with a republican prisoners association and brings family members on prison visits. Testimonials from councillor Paul Hogan and TD Brid Smith were furnished to the court.

The judge said he would spare him a conviction if he apologised publicly, donated €900 to charity and said sorry in private to Garda Cahill. Murphy told the court he apologises to anyone who was insulted. The case was adjourned until a date in January.

Comments are off as legal proceedings are ongoing.