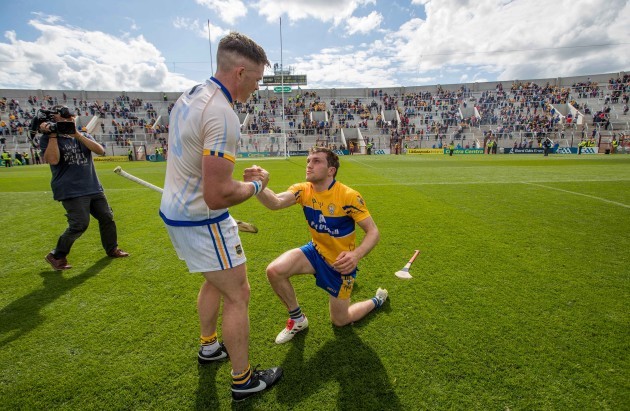 Padraic Maher commiserates with Shane O’Donnell after the game.

1. An anxious finale for Tipperary

What looked like a game where Tipperary would ease to victory transpired to be an altogether more nervy affair. Managing to amass 0-23 by the 55th minute was an impressive feat but their advantage was gradually whittled away by a series of points from Clare.

A point adrift with five minutes left, Clare were charging strongly at Tipperary and their spirits were soaring. Tipperary looked to be backed into a corner but they came out fighting. It could have been a more straightforward road to victory but they summoned a telling response when it was needed.

So a second successive season for Clare where they bow out at the All-Ireland quarter-final stage yet there’s a sense that this defeat will grate more. Last year was a decisive victory for Galway, yesterday was a win for Tipperary in a game where Clare certainly had the chances to triumph.

Their third goal arrived in injury-time courtesy of Shane O’Donnell yet they had spurned other chances to add to Aaron Cunningham’s double blast of goals early on. In total Clare posted 18 wides with their decision-making and shot selection proving costly in the time frame after those Cunningham goals in the first half.

Important players for Clare like Tony Kelly and John Conlon were withdrawn after ineffective outings. Their summer drew to a close yesterday after a game which gave them plenty cause to rue.

3. Banner inside forwards pose problems for Tipperary inside rearguard

It’s easy to point to the area of concern for Tipperary after this game, notwithstanding their capability to deliver a third successive championship win. Their full-back line leaked three goals, Clare had another disallowed from Conor McGrath for over-carrying, Aaron Cunningham was unlucky to find the side-netting in his search for a hat-trick and several other deliveries caused heart-stopping moments for Tipperary fans.

Clare serviced their forward line far better yesterday than they had in the Munster final. Shane O’Donnell and Conor McGrath looked threatening while Cunningham rewarded the faith in his selection.

Tipperary finished the game with a full-back line of Donagh Maher, Tomás Hamill and Sean O’Brien. The latter was making his championship debut, the former duo have been sprung since the Munster defeat to Cork in May.

Maher looks a diligent and tenacious defender but there is a sense of unease and inexperience with the inside rearguard. From last year’s All-Ireland win, James Barry is not being played in his best position, Michael Cahill is out injured and Cathal Barrett is no longer on the panel. It’ll be an interesting area for Tipperary to address. 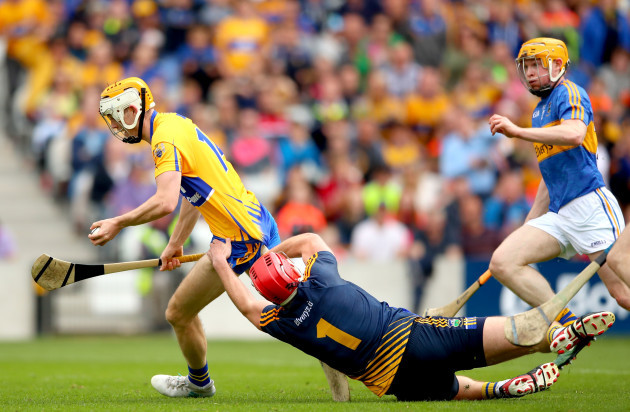 Aaron Cunningham goes past the Tipp defence for his second goal.

Since Tipperary were unseated in Munster in May, Michael Ryan has shuffled his pack in team selections. Both John and Noel McGrath – shining lights last September – have had spells on the bench, John against Westmeath and Noel against Dublin. Yesterday they were back in the starting side and delivered in spades.

The Loughmore-Castleiney duo settled early. By the 2nd minute they had each bagged a point, by half-time they had five between them and by the final whistle, it was 0-6 marked next to John’s name and 0-4 noted next to Noel’s name. Their clinical nature in front of goal and neat stickwork were illustrative of what they can offer.

Three qualifier games, three victories and those toxins from the Cork loss have been flushed out of Tipperary’s system. Their wins have not been perfect in July but they are certainly starting to hit their stride. Considering the end of the league and their Munster travails, Michael Ryan will be hugely satisfied at the prospect of hurling in August.

Aside from last year’s All-Ireland success, a chunk of this Tipperary team have instructive backdoor experiences from 2010 and 2014. They will be dangerous opponents for either of the provincial kingpins, Galway or Cork.