THE PSNI HAS made a renewed appeal for information after a bomb was found under the car of an off-duty officer earlier this year.

Police believe that the New IRA is responsible for this attack, and for an attack in October 2014 which was also an attempt to murder police officers.

A viable explosive device was discovered at the home of the officer in the Ardanlee area of Derry on 22 February this year.

Detective Superintendent John McVea said: “We are now able to link the device used in this attack with a previous incident in Ballyarnett Village on 13 October 2014 when unsubstantiated reports of a burglary and subsequent bomb warning calls led us to conclude at that time that the sequence of events was a deliberate attempt to lure police officers into the area to try and murder them.

We believe the New IRA is responsible for both attacks. I can also confirm that the same type of pressure plate device was used on both occasions.

These type of devices are designed to “murder and seriously injure people”, McVea said.

“If this UVIED had exploded with our colleague and his young family in the car earlier this year it would have had devastating consequences,” he said.

He emphasised that the dissident republicans had aimed to kill the officer, and were putting a number of lives at risk in the process.

McVea added: “I would like to make an appeal as we have new information about a light coloured car, understood to be a Toyota Avensis, which we believe was in the area of Ardanlee at 11.00pm on Tuesday 21 February 2017. 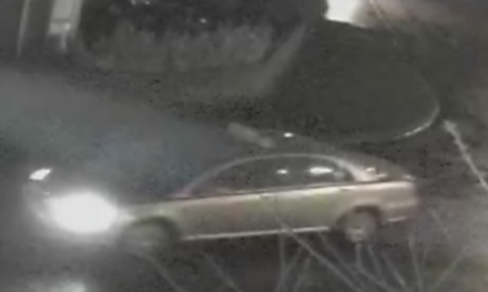 The Avensis that was in the area at the time

We have been unable to identify the driver or occupants and I would ask the owner of a car, in the CCTV image to come forward to police or indeed anyone who can provide information about it.

He said that he urged anyone who may have seen anything suspicious in the Ardanlee area between 5pm Tuesday 21 February to 7am Wednesday 22 February to contact the incident room on +44 287 137 9793.

Read: Romanian man who blackmailed Tyrone teenager who took his own life sentenced to 4 years

Read: Motorcyclist dies after crash involving a car in Co Down