CONOR MCGREGOR PLACED himself on a potential collision course with his mixed martial arts paymasters after refusing to rule out further boxing bouts following his defeat to Floyd Mayweather on Saturday.

The charismatic Irishman, a two-time Ultimate Fighting Championship world champion, performed creditably before eventually being stopped by boxing legend Mayweather in the 10th round at the T-Mobile Arena.

McGregor, 29, could pocket as much as $100 million from Saturday’s fight, eclipsing his entire career MMA earnings in a single night’s work.

While McGregor ended up being comfortably beaten by Mayweather, the MMA star — who had never boxed in a professional bout before Saturday — said he was open to continuing in the ring.

“I enjoyed the fight, It was a great contest,” McGregor said. “People ask me what’s next, I’m not quite sure. I’ve multiple titles in the UFC to think about.

“I could also continue in the boxing game…I have many options in mixed martial arts. I’m sure there’ll be options in boxing. Right now I’m a free agent.”

Many in the boxing world had questioned whether McGregor’s bout with Mayweather, which is on track to become the richest fight in history, should even have been sanctioned.

McGregor revealed after the fight he had been stung by the criticism of the boxing establishment.

“I was a little bit taken aback by the disrespect and the disregard that was shown. But I always knew that when the fight came around I’d give a good account of myself,” added McGregor, who was competitive in the early rounds before being dominated by Mayweather. 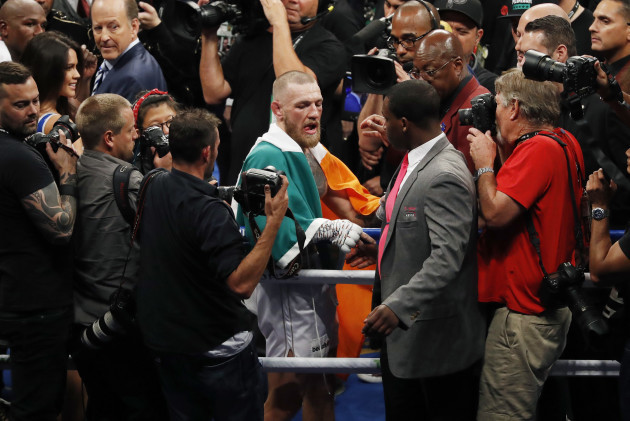 One obvious boxing bout on the horizon for McGregor could be against sparring partner Paulie Malignaggi.

Malignaggi has spent the build-up goading McGregor publicly, creating a grudge-match narrative that is likely to appeal to fans.

But any plans McGregor has about continuing his flirtation with boxing are likely to be opposed by UFC chief executive Dana White.

White, who was instrumental in helping set up the Mayweather fight, said he would prefer to see McGregor return to the world of cage-fighting — and stay there.

“I would rather he did not,” White said when asked if he wanted McGregor to continue boxing.

White emphasized that McGregor’s bout with Mayweather was a one-off, which had built its own momentum due to the status of the two fighters as the kings of their respective crafts.

“This thing built itself from the ground up. From the fans to the media, and then up to us, the promoters,” White said.

“It was just a real special event and a rare event. I’m not looking to do this again.”

White said he had not discussed future plans with McGregor.

“I’m ready to get back in the UFC and do what I do,” White said. “We’re not talking about fighting tonight. You know how he is. When he’s ready he’ll let me know.”

White admitted though that he was proud McGregor had carried the flag for mixed martial arts, noting that he had landed more punches on Mayweather than many other fighters.

“Conor McGregor’s a fighter, and we saw a fight tonight,” White said.

“I don’t know if it was the best boxing we’ve ever seen, but we saw a fight. Conor was in here landing jabs on Floyd Mayweather. Conor McGregor looked damn good to me.”

Dana White: ‘I’m proud of Conor tonight but I would rather he returned to MMA’
‘Tonight I chose the right dance partner to dance with. Conor McGregor, you’re a hell of a champion’