AUSTRALIAN ANTI-IMMIGRANT politician Pauline Hanson caused a furore when she entered the Senate wearing a full burqa, earning a blistering rebuke from the country’s top lawyer for the “appalling” stunt.

Hanson wore the Islamic garment in the chamber to highlight what she said were the security issues it posed, linking it to terrorism as fellow senators heckled her.

“Will you work to ban the burqa in Australia in light of what is happening with national security?” she said after whipping off the garment to question  Attorney-General George Brandis.

She added: “Terrorism is a true threat to our country, many Australians are in fear of it.”

Brandis said his conservative government had no such plans, warning Hanson she risked offending the Muslim community by wearing a burka when she was not a follower of Islam.

“To ridicule that community, to drive it into a corner, to mock its religious garments is an appalling thing to do, and I would ask you to reflect on what you have done,” he said.

Brandis, his voice cracking with emotion, also said that being a strict adherent Muslim, such as those who wear the burka, was “absolutely consistent” with being a law-abiding citizen.

“We have about half a million Australians in this country of the Islamic faith and the vast majority of them are law-abiding, good Australians,” he said.

Brandis’ remarks prompted a standing ovation from his political opponents in the Labour and Greens parties. 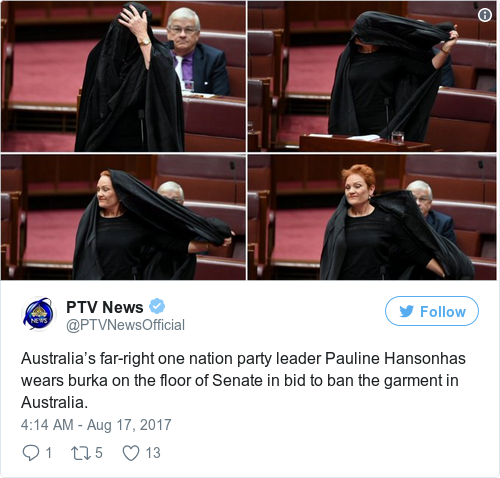 Australia’s far-right one nation party leader Pauline Hansonhas wears burka on the floor of Senate in bid to ban the garment in Australia. pic.twitter.com/BLSZYjw2XK

“Pauline Hanson mocked the religion of some Australians… she made a mockery of an honourable place (the Senate),” he told Sky News.

“In the same week that we saw white nationalism rear its ugly head in the country of our closest ally, in that week a stunt like this gets pulled in the Australian Senate,” he said.

“It is hurtful, it is offensive, it is wrong.”

Hanson first gained prominence in the 1990s, when she warned Australia was in danger of being “swamped by Asians”.

After a 12-year hiatus from politics she returned in 2014, this time targeting Muslims and was elected to the Senate two years later as leader of the right-wing One Nation party.

In her first speech after returning to parliament, she said Islam was “a culture and ideology that is incompatible with our own”.

Hanson was unrepentant after her latest stunt, telling commercial radio: “Is it extreme? Yes. Is it getting my message across? I hope so.”