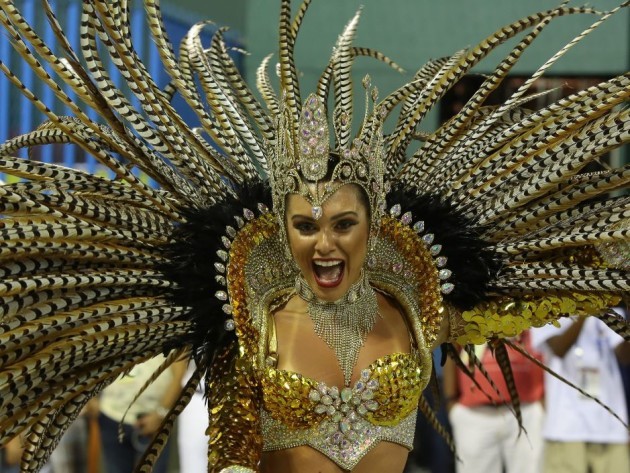 The first night of the Rio Carnival earlier this year

Paulo Sergio, who owns Bar do Serginho in the Brazilian city’s trendy Santa Teresa area, says he has been the target of a dozen assaults over the last year.

All of Rio is experiencing rising insecurity but the crime wave in Santa Teresa is especially bad — and it threatens to kill the city’s party spirit.

Brazil’s government has sent almost 10,000 troops to help the police in Rio de Janeiro state, which is nearly bankrupt after years of corruption and hosting last year’s Olympics.

However, that is not helping to maintain what had been a growing nightlife economy.

With its cobbled streets and quaint houses, Santa Teresa has become a magnet for music events, small hotels, restaurants and galleries. But now it’s also a magnet for brazen robberies.

“They arrive in groups of four, stop the car outside, then steal clients’ phones and watches and remove the cash register,” Sergio, who has run the bar for four decades, says.

The owner of a restaurant called Espirito Santa, Natacha Fink, says there have even been clients who called ahead “to ask if the restaurant is safe”.

Businesses are responding to the crime wave as best they can. When taxis refuse to take passengers to Santa Teresa, one restaurant offers to pick them up and bring them home free of charge.

Sergio has had to start closing early because “the attacks start at about 8pm”.

Francisco Dantas, who runs Cafe do Alto, is among those who have started doing home deliveries. ”If people won’t come out, then I have to go them,” he says.

“The number of clients coming into the restaurant has fallen 30 to 40% since November. It’s the first time that my revenue has fallen in 15 years.”

Banding together two months ago in a neighborhood association called Amosanta, locals hope to improve the area’s image and pressure the authorities into doing more about their safety.

“It’s better. There are already more police, but it’s still not like before,” Fink says.

Valter Gabriel said visits to his bar Arco Iris have dropped a third since last year’s Olympics, and that customers leave earlier.

“I’m afraid of getting robbed,” he says. “People don’t feel safe in the streets.”

Ricardo Rabelo, from the culture website Bafafa, says Lapa is Rio’s “thermometer” and that the diagnosis is not good. Rio’s residents, called Cariocas, “aren’t afraid of crowds — it’s empty spaces they are afraid of”.

The city’s cultural life is actually growing, he says, with about 70 events typically scheduled on any given weekend.

“The difference is that Cariocas are going to the ones that take place in daytime.”

“The police don’t have enough cars, bullets or even food,” he adds.