THERE ARE GROWING fears that journalist and opposition activist Roman Protasevich, who was taken off a diverted Ryanair plane yesterday, has been tortured since his detention in Belarus.

The 26-year-old was arrested along with his girlfriend after the plane was forced to divert to Minsk while over Belarusian airspace.

The plane was headed to Vilnius from Athens and the crew was told the diversion was due to a bomb threat. Accompanied by a Belarusian fighter jet, it landed in the capital Minsk.

The move has been condemned by European leaders, including Taoiseach Micheál Martin who described the Belarusian government’s defence of their actions as “nonsense”.

Protasevich, who had been living in exile between Poland and Lithuania, began his digital activism in his teens.

A student at the time, he was arrested in 2012 aged just 17 for running two groups on the Russian-based social networking site Vkontakte against Belarusian President Alexander Lukashenko.

One of them was called “We are sick of this Lukashenko” – the former collective farm manager who has ruled Belarus with an iron fist since 1994, a year before Protasevich was born.

“They hit me in the kidneys and liver,” Protasevich said at the time.

I urinated blood for three days afterwards. They threatened to accuse me of unsolved murders.

During the interrogation, he said, officers from Belarus’s security service, still named the KGB as in Soviet times, were demanding his passwords to the online groups.

He later worked as a photographer for Belarusian media and was the recipient of a Vaclav Havel Journalism Fellowship in 2017-2018 – an award for aspiring independent journalists named after the late Czech dissident turned president.

Protasevich left Belarus in 2019 after he started working for the highly influential pro-opposition Telegram channel Nexta (‘Somebody’ in Belarusian).

He later became editor-in-chief at the channel, which currently has more than 1.2 million subscribers.

The channel had a role in organising the anti-Lukashenko protests by sharing with its followers details on meeting times and dates. 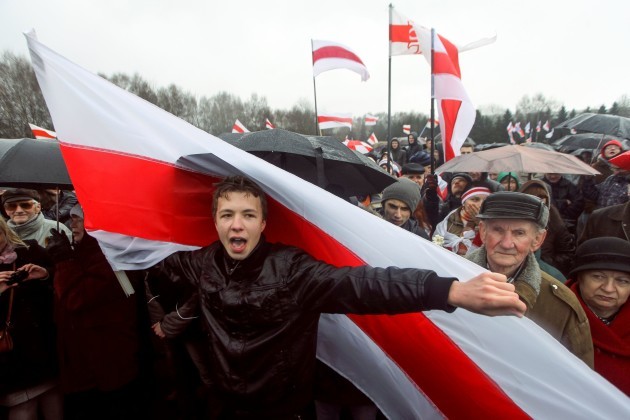 Roman Protasevich attends an opposition rally in Minsk, Belarus, in 2012

Living between Poland and Lithuania, both hubs for Belarusian exiles, he has since become the editor of the channel BGM – an acronym in Russian meaning ‘Smart Belarus’ – which has 260,000 subscribers.

The 26-year-old’s girlfriend, Sofia Sapega, who was detained with him, is a law student at the European Humanities University (EHU) in Vilnius.

Unprecedented mass protests broke out after Lukashenko declared victory once again and the authorities responded with violence.

Belarus issued a warrant for Protasevich’s arrest in November over his work for Nexta, declaring that he was “involved in terrorist activity”.

On his Twitter profile, he mockingly describes himself as “history’s first terrorist journalist”.

Terror offences can carry the death penalty in Belarus, which still carries out capital punishment.

After the plane was diverted and coming in to land in Minsk on Sunday, passengers overheard him saying that “he was facing the death penalty”.

His latest tweet on 16 May was about photographing Tikhanovskaya’s visit to Athens – the city where the Ryanair flight left from on its way to Vilnius.