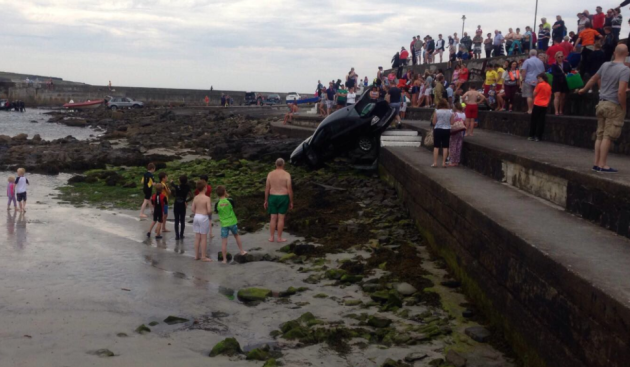 The scene at the main strand in Kilkee, Co Clare.

EMERGENCY SERVICES WERE called to the beach in Kilkee, Co Clare after a car rolled down to the bottom of the steps along the main strand.

An ambulance, a fire brigade unit and the Irish Coast Guard are all involved in the operation to remove the car.

The spot where the car ended up down the steps is directly below the main car park next to the beach and waterpark. 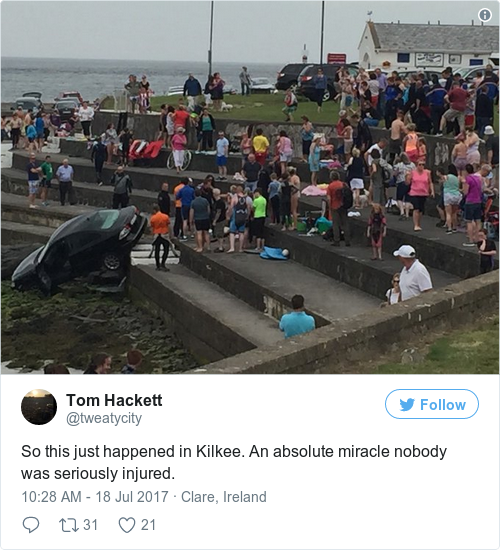 So this just happened in Kilkee. An absolute miracle nobody was seriously injured. pic.twitter.com/CfsRmK3DcE

No one was injured in the incident with Coast Guard officials saying the car was unoccupied when it hit the rocks.

Dan Mooney Snr, an eyewitness to the incident, said that people were screaming to others to get out of the way of the runaway car.

“There’s a beautiful area surrounding the beach where there are steps where people picnic and sit around and go in,” he told TheJournal.ie.

So all the steps were pretty much occupied and then I heard a woman scream and I looked up and I see this car. It was in one of the parking slots, and it had got up onto the grass verge and rolled down.

“The drop to the first step is about five or six feet. So it dropped to the first step, and then the second, third, went over the fourth and then nose down onto some rocks on the beach. It was pretty spectacular now.”

It’s amazing that nobody was seriously injured I think one woman was getting attention, it could have been for shock, but people were screaming to get out of the way.

Another eyewitness told the Limerick Leader that two children jumped out of the car as it started moving.

“I was standing just yards from the car when I heard the engine revved up. I saw some kids jumping out the car as it took off,” the eyewitness said.

Mooney added that he did not see the children jumping out of the car but heard second-hand that they may have started the engine accidentally.

“I didn’t see it but shortly afterwards I heard second-hand that they were children of the owner of the car and he was putting something in the boot,” he said.

“It was truly amazing that there was nobody maimed or worse or killed.”

The incident happened at about 3pm when the area was filled with people at the beach.

Read: Now you can find out where the safest, cleanest beaches are before you leave home >

Read: Ice-cream van to the rescue after transporting patient from Portmarnock beach >