Despite signing a new contract with the IRFU last month, the Munster man misses out on the four-Test schedule as he continues to recover from a neck injury.

There are three uncapped players among the group with Ulster’s Will Addison named among the back-line options alongside Munster centre Sam Arnold and Leinster out-half Ross Byrne, who toured Australia during the summer.

Addison was recruited to play for Ulster this season after coming through the ranks with the Sale Sharks, where he was club captain before crossing the sea.

Irish-qualified through his Fermanagh-born mother, Addison trained with Schmidt’s squad during the tour of Australia in June. The 26-year-old is comfortable in the back three, but has excelled in the centre for the northern province through the opening weeks of this season. 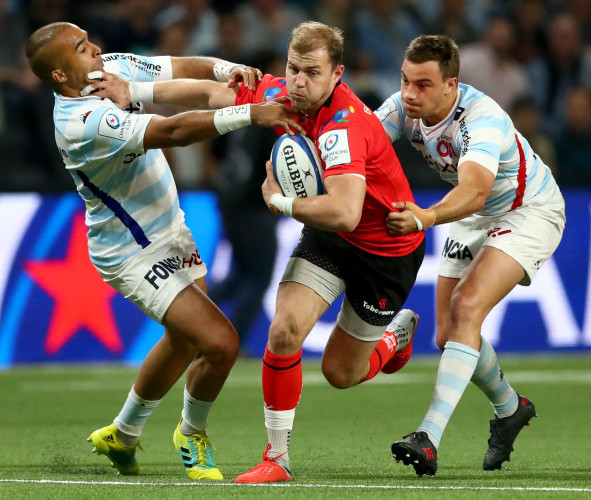 Addison breaks through Simon Zebo and Olivier Klemenczak on Saturday.

Ireland, who will be once again captained by Rory Best, have won 14 of the last 15 Tests, a run that took them to a Grand Slam and a successful series win in Australia. That form will be put to the ultimate exam next month as the back-to-back world champions New Zealand visit the Aviva Stadium on 17 November.

Schmidt’s side will begin their schedule in Chicago against Italy on 3 November before returning to Dublin to host Argentina on 10 November and the Guinness Series will conclude against USA on 24 November.

Schmidt on Carbery move: ‘If you’re not playing in the position it’s hard to develop’