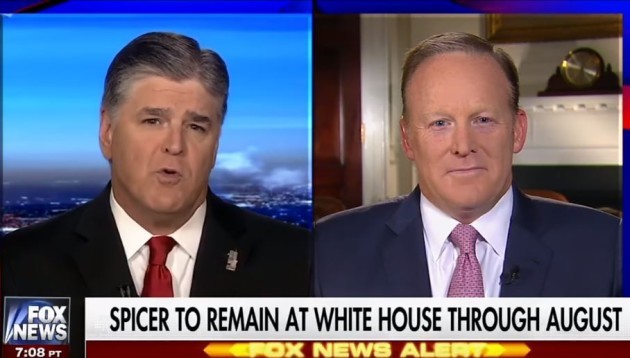 FORMER WHITE HOUSE press secretary Sean Spicer says he quit his post to avoid a situation in which there would be “too many cooks in the kitchen”.

Speaking to Sean Hannity on Fox News in his first interview since his dramatic resignation yesterday, a smiling Spicer said that Donald Trump hadn’t wanted him to resign, and that the president had been “unbelievably gracious” (“he’s always thinking of other people”) throughout the process.

“I just think it was in the best interest of our press organisation to not have too many cooks in the kitchen,” Spicer said when asked what had brought about his resignation.

I wanted to move on to give Anthony (Scaramucci, the new White House communications director) and Sarah (Huckabee Sanders, Spicer’s successor) that clear lane in their respective areas.

While stressing that his leaving the administration was in no way acrimonious, Spicer did take the opportunity to lash the ‘fake news media’ for its ‘obsession’ with the Russia investigation that has dogged Trump’s presidency from the start.

“I was increasingly disappointed in how so many members of the members here in the media do their job, or rather, don’t do their job. The bias which they come from it at,” he said.

Sean Spicer is a wonderful person who took tremendous abuse from the Fake News Media – but his future is bright!

It's been an honor & a privilege to serve @POTUS @realDonaldTrump & this amazing country. I will continue my service through August

The majority of folks that are now in this – in the briefing room, that are going into journalism. They’re not there for the facts and the pursuit of the truth.  Rather, they’re trying to figure out, how do I get on TV, how do I become a YouTube star.  And that’s disappointing.

Asked if he had been considering his position for some time, Spicer responded flatly “no”.

The now resigned press secretary also gave his opinion on comedian Melissa McCarthy’s by now infamous impression of him as a hapless figure with anger management issues on Saturday Night Live.

When it’s funny it’s funny, you need to laugh at yourself. I think there were a couple of parts of it (SNL) that were funny, but a lot of it was over the line and wasn’t funny, it was stupid or silly or malicious.

There are times when it goes from funny to mean. But you have to have a thick skin if you’re going to do this.