AN ISRAELI SECURITY guard shot dead a Jordanian who attacked him with a screwdriver at the Israeli embassy compound in Amman, while a second Jordanian was accidentally killed, officials and a security source said.

The incident on Sunday night came with tensions high over new Israeli security measures at a highly sensitive holy site in Jerusalem, but it was not clear if there was any link.

The Jordanian had come to an apartment in an annex building at the Israeli embassy to install furniture and stabbed the security guard in the back with the screwdriver, Israel’s foreign ministry said.

The guard then responded by shooting dead the Jordanian worker, while the apartment owner who was there at the time was wounded and later died from his injuries, according to the foreign ministry and a security source.

The security source in Amman had confirmed earlier that two Jordanians were killed in a shooting in the area of the embassy.

“The first Jordanian, 17-year-old Mohammed Jawawdeh, succumbed to his injuries at the scene. The second, Bashar Hamarneh, a doctor who was in the residential quarter of the embassy at the time of the incident… died of his injuries after midnight in hospital,” the security source said.

The injured Israeli is “deputy director of security at the Israeli embassy and is still receiving treatment in hospital”, the source added.

Jordanian police said in a statement they were “informed late evening (Sunday) of a shooting at a residential building inside the compound of the Israeli embassy”.

Police deployed to the scene and surrounded the area, the statement said, adding that the two Jordanians had gone into the building to carry out “carpentry work”.

An investigation into the shooting was still underway, the police said.

Jordanian security forces deployed in the streets around the embassy when the incident occurred. 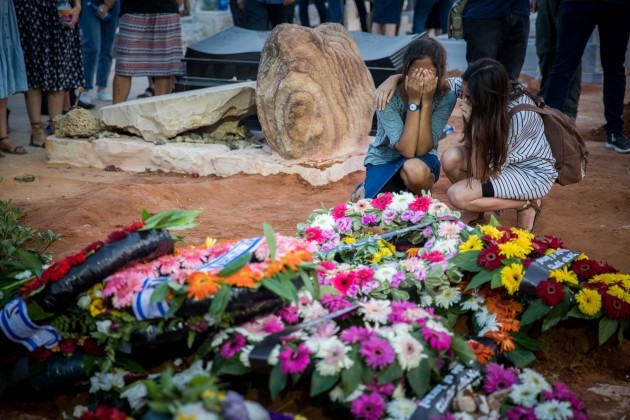 People attend the funeral of the three Israelis killed in West Bank settlement of Halamish, in Modi’in.

Israel and Jordan are bound by a 1994 peace treaty, but tensions have been high in recent days after Israel put in place security measures at a highly sensitive holy site in annexed east Jerusalem.

Israel installed metal detectors at entrances to the site following an attack nearby that killed two policemen.

On Friday, thousands of Jordanians took to the streets of Amman after the weekly prayer to denounce the Israeli measures at the holy compound, which includes Al-Aqsa mosque and the Dome of the Rock.

Jordan is the official custodian of Muslim holy sites in Jerusalem.

A crowd estimated at more than 8,000 turned out for a demonstration called by Islamist movements and leftist parties.

Israel shut off the mosque compound on 14 July after Arab Israelis attacked and killed two police officers nearby.

It reopened it on 16 July, but with the metal detectors in place, stoking Palestinian anger.

Violence has since flared between Israeli security forces and Palestinians who are demanding that Israel remove the metal detectors.

On Friday, a Palestinian also stabbed three Israelis to death inside their home in a settlement in the occupied West Bank.