THE CHEETAHS BRIEFLY threatened to steal the stage on this opening night, but Ulster weren’t prepared to fluff their lines as they thrilled a capacity crowd with a six-try victory. 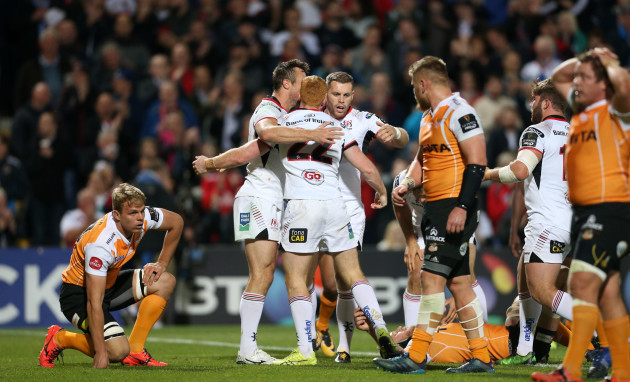 As far as campaign openers go, this was as close to perfect as Les Kiss could have asked for as his new-look side withstood an early Cheetahs onslaught before producing some scintillating rugby of their own.

The South African side were sensational to watch from the off but after scoring two early tries, they were then blown away by Ulster who matched fire with fire to clinch a bonus point before the break. The sin-binning of Henco Venter was the game’s turning point.

Jean Deysel, on debut, was outstanding and his barnstorming performance alongside South African compatriot Marcell Coetzee underpinned an Ulster performance brimming with quality and intent.

John Cooney enjoyed a brilliant bow for the province, too, while the likes of Stuart McCloskey, Tommy Bowe and Charles Piutau regularly got their side on the front foot with bursting breaks.

Bowe marked his return to Ulster colours with an early try to set the hosts on their way after the Cheetahs’ blistering start and further scores from Alan O’Connor, McCloskey and Piutau before the break saw Kiss’ side assume complete control.

Louis Ludik and replacement out-half Peter Nelson crossed the whitewash for number five and six during the second half, as the Cheetahs were cut apart defensively on their historic first appearance in the Guinness Pro14. 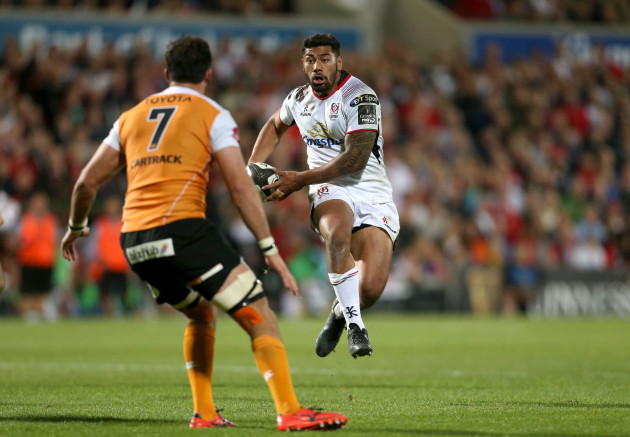 On this evidence, Rory Duncan’s side will bring a huge amount to the competition as they looked to get the ball in hand at every opportunity and run it from deep. They more than played their part in an absorbing game under the lights, and you feel they will only get better as the weeks go on.

The visitors wasted little time in unveiling their lethal running game and penchant to entertain during a ferocious and breathless first quarter. A sweeping move involving Shaun Venter, Clayton Blommetjies and Sergeal Petersen gave Ulster an early warning and provided the rest of us with an indication as to what was to come.

Having been caught a little cold, Ulster were penalised at the breakdown and William Small-Smith had the chance to open the Cheetahs’ Pro14 account, but the centre snatched at his effort from the tee.

Cooney showed no nerves at the other end after Coetzee had been caught high and Ulster, having been stretched defensively, were up and running.

No harm for the Cheetahs though, they came again.

Venter’s darting run had Ulster scrambling and his grubber through had Small-Smith tearing down the left, only for the bounce of the ball to save the home side when an opening try looked inevitable.

It wasn’t long in coming, however. Christian Lealiifano’s clearing kick invited Andrew Trimble to contest the ball in the air but when Rosko Specman won that aerial duel from a standing start, there was no one at home for Ulster on the right wing.

Specman turned on the afterburners and left the white shirts in his wake, before offloading inside to Blommetjies to take fullback Piutau out of the equation. Having fluffed his first effort, Small-Smith nailed the conversion from the far touchline.

Anything the Cheetahs could do, Ulster matched. 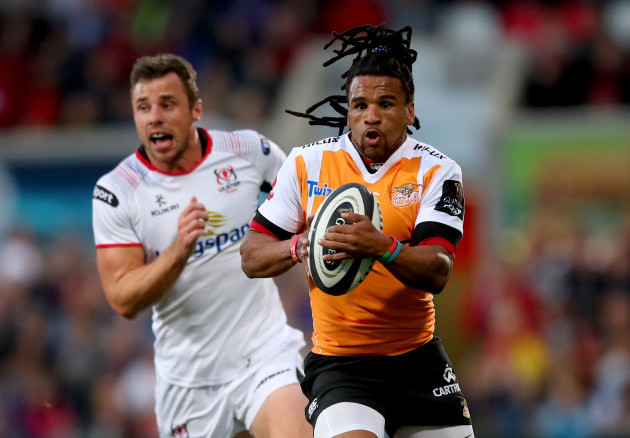 Piutau and Ludik combined in midfield to feed the onrushing Bowe, who had picked a glorious line from deep, to cross the whitewash for Ulster’s first try of the campaign. It was a little more direct and a little less flamboyant but it was mightly effective all evening.

Cooney struck the conversion sweetly but had to hold his hand up minutes later.

The scrum-half’s attempted kick through was blocked down and Ulster were left exposed as Makazole Mapimpi latched onto the loose ball, hacked it down field and won the foot race with Piutau to dive on it. Small-Smith’s kick from the touchline dropped over, and the Cheetahs were back in front. 8-14 after 23 minutes.

It was absorbing stuff, but the end-to-end pattern in proceedings was soon replaced by a period of Ulster dominance before and after the interval. Venter’s sin-binning was not only the turning point but the game’s defining moment.

The openside flanker ensured a powerful Ulster maul went no further as they rumbled on towards the line and during the 10 minutes he was in the bin, Ulster scored three tries to seize control of the contest.

Firstly, second-row O’Connor showed a sharp instinct and good awareness to dive on the loose ball after Sergeal Petersen had fumbled the bouncing ball over his own line and McCloskey’s score three minutes later was just as straightforward.

Cooney gathered from the lineout and a flat pass for the centre opened up the Cheetahs defence, which was now creaking every time Ulster knocked on the door.

At this stage, it was wave after wave of Ulster attack and Coetzee’s barraging pick and go created the opening for the backs to throw it through the hands and set Piutau free on the left. The Bristol-bound fullback did the rest, holding off two tackles to ground in the corner. 27-14. Bonus point secured.

The Cheetahs had no answers defensively. Deysel’s thundering hit in midfield set the outstanding Piutau on his way and Ludik fended off a couple of orange shirts to power over. There was very nearly a repeat score in the same corner, but the ball was knocked on.

By that stage, Ulster had taken the sting out of the game and any potential Cheetahs riposte. They briefly threatened to stage a comeback of sorts when Cecil Afrika ran from deep, scythed through and laid it on a plate for Peterson to finish.

But Ulster responded through the boot of Cooney to keep the Cheetahs at bay and Nelson’s late try rubber-stamped a win leaves huge grounds for optimism around these parts.

Start as you mean to go on, and Ulster delivered first up.