THE JIHADIST CELL behind last week’s twin attacks in Spain was built around a “guru” and went completely offline to avoid detection by anti-terrorist police, experts said.

The group managed to evade authorities so well that even a giant explosion at their bomb factory in Alcanar, where police later uncovered massive quantities of ingredients to build TATP, was not at first linked to the jihadists.

Investigators only made the connection after their vehicle rampages in Barcelona and the nearby seaside town of Cambrils.

Experts say the key reason was the way the group was formed.

The “propaganda and recruitment techniques” are like those of a cult, said Lurdes Vidal, director of the European Institute of the Mediterranean.

“The role of the family is emphasised, the group is a closed circuit, and everything is done to stop things from getting out,” she said.

And at the heart of the group, “there is a central person who unites everyone, who provides Salafist answers to youths who may have lost their bearings,” said French former intelligence officer Alain Rodier.

That key person in this case was the Moroccan imam, Abdelbaki Es Satty, who was killed in the blast accidentally triggered by the jihadists themselves.

He may have presented two different faces to people of Ripoll, the small town where he and many of the suspects lived, said Alberto Bueno, a member of the International Observatory of Studies on Terrorism.

“He shows one face when he preaches at the prayer hall in Ripoll, and the other of radicalisation,” said Bueno, a researcher at the university of Granada, in Southern Spain.

The unity of the group is further compounded by the fact that many of its members are siblings, noted the expert, pointing out that among the dozen suspects are four sets of brothers.

Yves Trotignon, a former member of France’s anti-terrorist authorities, noted that the set-up featuring relatives was also seen among the perpetrators of the 11 September, 2001 terror attacks in New York and the 11 March, 2004 train bombing in Madrid.

Rodier, a former officer in French intelligence, said Spanish experts were fully aware that such groups formed around families are particularly tight, because, “you’re not going to betray your brother”.

The family connections also ease the process of indoctrination, he said.

While Spain’s attackers had prepared their assaults for months, it is likely that the process of radicalisation began a long time ago, he said.

Alberto Bueno noted that the group had eschewed online social networks and stayed off mobile phones, at a time when anti-terrorist police scour the internet for signs of radicalisation among users. 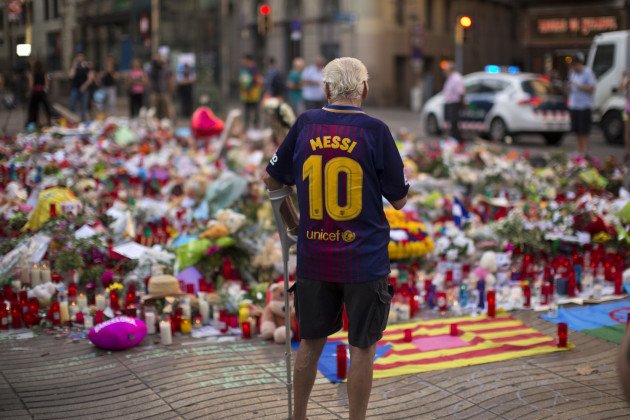 A man stands next to flags and flowers on Las Ramblas.

“This classic model, with people who know each other and a guru who accompanies the development of the cell goes back 15 to 20 years earlier,” said Alain Rodier.

The experts also noted that the youth of many of the suspects — some of them as young as 17 — was no accident.

This is a period of life that is potentially volatile, Vidal said, noting that “religion was used to get to the youths, in order to have a very strong emotional impact in the construction of their identity.

“These are Muslims, not converts. An imam is necessary, an incubator who comes from among them, and who convinces them that their faith requires them to take action,” said Rodier.

“They may have viewed themselves reconquering Spain as Muslims, … as suggested in the letter found in Alcanar,” he added.

In the rubble of the Alcanar house, police found a sheet of paper slipped into a green-coloured book.

A brief letter from the soldiers of the Islamic State on the territory of Al Andalous to the crusaders, the sinners, the unjust and the corrupters.

Al Andalous is the name of the territories in modern Spain that until 1492 were by Muslims.

Read: ‘I’m very sad. But I’m trying to be okay for my kids’ – Irish survivors of Barcelona attack return home >