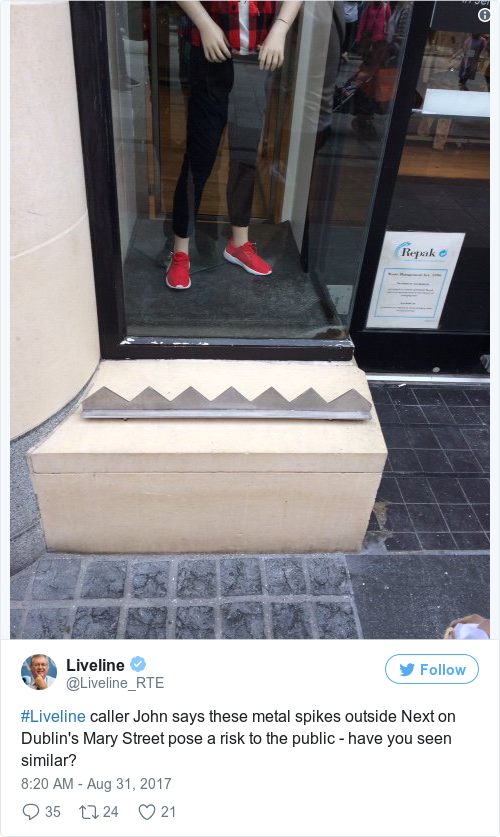 #Liveline caller John says these metal spikes outside Next on Dublin's Mary Street pose a risk to the public – have you seen similar? pic.twitter.com/845pwdxCPA

JERVIS STREET SHOPPING Centre has said anti-loitering spikes present outside the Next store in Dublin will be removed after a backlash from the public today.

Bringing the issue to the public’s attention today, an RTÉ Radio One Liveline caller John Kavanagh questioned the danger of the spikes, which can be seen in place outside the Next store at the Henry Street entrance.

Kavanagh, a former owner of a pub, told presenter Joe Duffy that he had similar spikes on his premises but was told by his insurer that he would have to remove them.

In a statement to TheJournal.ie this evening, Jervis Street Shopping Centre said the metal strips were installed 12 years ago by Next as “people were sitting on the walls blocking their window displays”.

The spokesperson continued: “Considering the comments made today about these metal strips, we plan to liaise with Next to arrange their removal. These strips are not in place in any other areas of the Shopping Centre.”

Spikes and metal barriers have already been put in place in a number of places around the city, including the Department of Social Protection back in 2016.

There was criticism of the decision to install the barriers, with homeless charity Inner City Helping Homeless describing it as an “unsympathetic way of dealing with the homeless crisis”.

However, the Department of Social Protection stressed to TheJournal.ie at the time that it was not an attempt to target the homeless community in any way.

Concerns surrounding spikes and barriers are regularly raise and tend to increase in volume following the death of a person on the streets. Earlier today, it was confirmed that a homeless man died on Suffolk Street in Dublin in the early hours of the morning.

The spikes, posted by Liveline on Twitter, received a significant amount of backlash from social media users.

“What if a blind person sat down to rest their legs? Or if a kid tripped and landed on them,” one user wrote.

“These things are everywhere to prevent you from sitting down, very unwelcoming city Dublin has become,” wrote another. 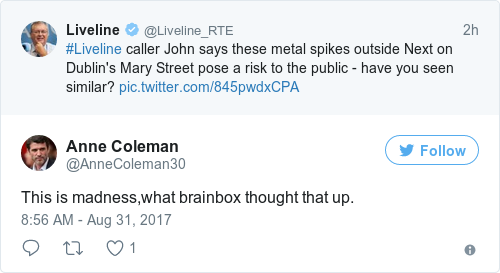 This is madness,what brainbox thought that up. 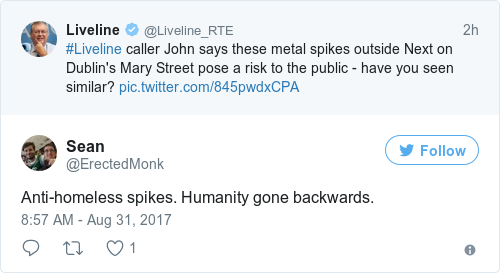 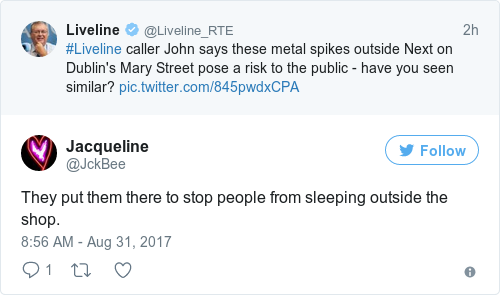 They put them there to stop people from sleeping outside the shop.

While Kavanagh criticised Next for the installation of the spikes during his Liveline interview, the store told TheJournal.ie that it was not responsible and it was the shopping centre that had put them in place.

Jervis Street Shopping Centre contradicted this, saying the store itself had put them in place 12 years ago.

Read: Landlord says barriers at social welfare building were not targeted at the homeless