THE CHIEF EXECUTIVES of three major US firms have stepped down from Donald Trump’s business advisory panel, citing his failure to immediately condemn Saturday’s white nationalist rally in Charlottesville.

The heads of pharmaceutical company Merck (called MSD in Ireland), sportswear brand Under Armour and tech giant Intel have all opted to leave the advisory council, as sustained pressure comes on the US President in the wake of the weekend’s events.

A woman died and 20 people were injured when a car ploughed into a crowd of people after a rally by Ku Klux Klan (KKK) members and other white nationalists turned violent on Saturday.

In a statement announcing his decision, Merck CEO Kenneth Frazier said: “Our country’s strength stems from its diversity and the contributions made by men and women of different faiths, races, sexual orientations and political beliefs.

As CEO of Merck and as a matter of personal conscience, I feel a responsibility to take a stand against intolerance and extremism. 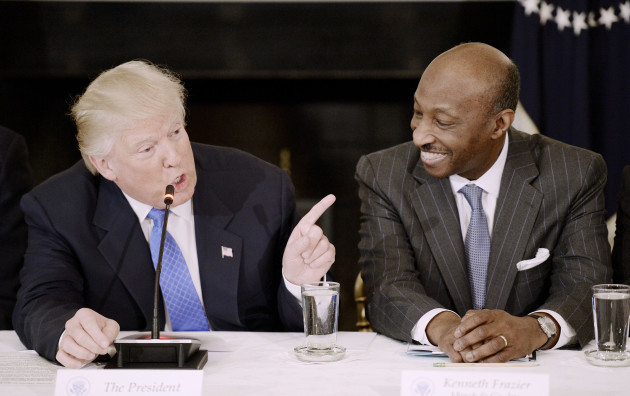 Intel CEO Brian Krzanich said he joined the business council to try to advance the goals of the country’s manufacturing industry, but he believed that was no longer possible.

He said: “It is clear even to me that nearly every issue is now politicised to the point where significant progress is impossible.

I called on leaders to condemn the white supremacists and their ilk who marched and committed violence. I resigned because I want to make progress, while many in Washington seem more concerned with attacking anyone who disagrees with them.

Under Armour CEO Kevin Plank said that he loved the country and was “stepping down from the council to focus on inspiring and uniting through [the] power of sport”. 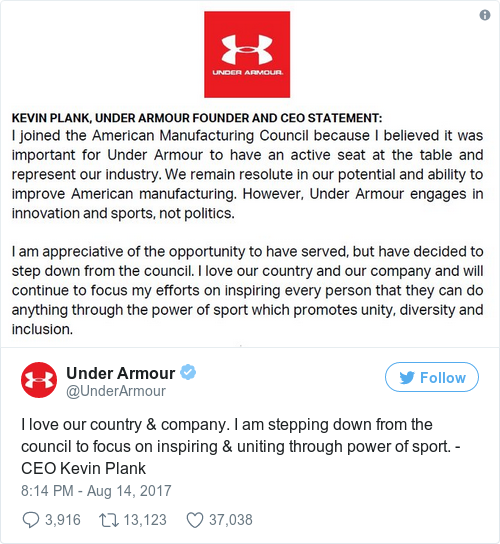 I love our country & company. I am stepping down from the council to focus on inspiring & uniting through power of sport. – CEO Kevin Plank pic.twitter.com/8YvndJMjj1

Meanwhile, several hundred angry protesters demonstrated outside Trump Tower in New York yesterday, denouncing the President before his first visit to his Manhattan residence since taking office more than six months ago.

After making a brief stop at the White House, the commander-in-chief is spending several days in his Manhattan apartment before returning to his golf club in Bedminster, New Jersey to finish out his first summer holiday as president.

“Hey, hey. Ho, ho. Trump the racist has to go!” sang the crowd, some holding up giant balloon letters in gold that read: FU TRUMP. 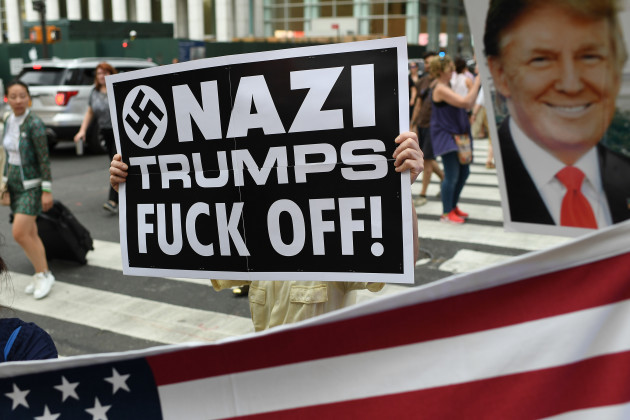 “No Trump, no KKK, no Fascist USA,” the group chanted. “Love, not hate. That’s what makes America great.”

Dozens of officers stood guard for several blocks. Police detained at least one woman protesting outside the Prada store, as angry demonstrators rounded on those in uniform shouting: “Who do you serve?”

But Trump arrived in New York after dark, driving through the relatively empty streets of Manhattan under a heavy police presence.

No protesters could be seen from the motorcade along the way, as many were gathered on a different street from the chosen route.

“Feels good to be home after seven months, but the White House is very special, there is no place like it… and the US is really my home,” Trump said on Twitter.

Read: The number of hate groups in the US have been on the rise since 2014