TAOISEACH LEO VARADKAR has said it will be difficult to find alternative classroom accommodation for students affected by the closure of schools with fire safety and structural defects.

He also confirmed that approximately 40 schools will be inspected amidst concerns about structural issues at a number of facilities.

Two schools and a building at a third, all in Dublin, have been closed so far this week following inspections by the Department of Education.

They are Tyrrelstown Educate Together, St Luke’s National School also in Tyrrelstown and Ardgillan Community College in Balbriggan.

Speaking during Leaders’ Questions, Taoiseach Leo Varadkar said approximately 40 schools will be inspected over the mid-term and the following week. It should be completed by mid-November.

“Everything will be done to find accommodation nearby, but it is going to be difficult”

“We also need to carry out the necessary structural investigations to get a full-scale of the problem,” he said.

The Taoiseach said he appreciates people’s understanding at the moment, adding that the department is attempting to regularly update schools. He admitted that there is an information as the government does not have all the information yet.

Calleary added that issues around fire safety in these schools has been reported since 2015. Today, Dun Laoghaire TD Richard Boyd Barrett said he had raised the issues some months ago, and was told a review was taking place. “It would be good if those in government listened once in a while,” he said.

Speaking in the Dáil yesterday, Varadkar said the Irish government will pursue the builders in the courts, adding that it is already underway in respect to some fire safety issues.

It certainly appears that corners were cut back in the Celtic Tiger period when it came to the building of some of these schools. That is truly disgraceful. We are in a very different position now.

For the last couple of years a clerk of works was present on site every day when a school was being built in order to make sure that it was built up to standard. It certainly appears that prior to 2014 or 2015, and particularly during the Celtic tiger period, schools were built without proper oversight. We now have to go back, make sure they are safe, fix them, and pursue the people responsible.

Education Minister Joe McHugh told reporters today that he hopes the assessment of all the schools impacted will be completed by the end of the mid-term break next week. 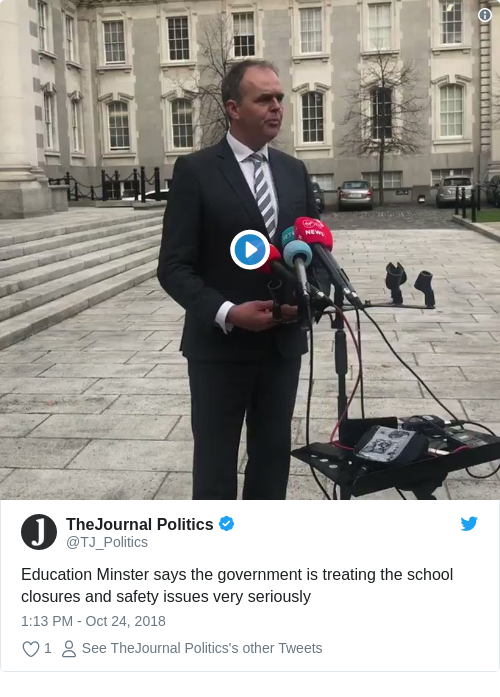 If extra workers need to be brought in from the UK to ensure that deadline is met, McHugh said that should be done. He said he understands that while parents are concerned about the safety of their children, there are also concerns and worries about organising childcare if delays persist in getting the schools reopened.

He urged communities to come together and those with information about possible alternative accommodation should contact their local principal.

The 40 schools affected were all constructed by Western Building Systems.

In a statement overnight the firm which has been operating for 35 years said it recognised that “this is a very important matter, not least for the pupils, parents and teachers of the schools involved”.

Until now, our integrity has never been questioned. Each of our Department of Education and Skills’ projects, both before and since the amendments to building regulations in 2014, were subjected to inspections during construction. Every time, each was certified as meeting compliance standards.

Western Building Systems has said it has not yet received all the reports on the affected schools.

We are interested in getting to the bottom of this and that starts with establishing the facts.

We are moving to intensify our engagement with the Department and other relevant bodies to better understand the issues which have now arisen and to work to resolve them.

The issue looks set to have a significant impact on the communities involved, with local TDs highlighting the difficulty in finding alternative accommodation.

This will be nightmare for those in Tyrrelstown ETNS & St Luke’s getting to &from alternative accommodation. Questions remain how company built so many schools without proper regulation & oversight. I’ll be writing to Minister for answers immediately #dubw https://t.co/iSOeJiz2Rt

As a result of the closure of the campus Dublin’s county returning officer has moved its polling station for Friday’s Presidential election.

Anyone who would normally cast their ballot at Tyrrelstown Community Centre, will be able to vote at Le Cheile Secondary School, Hollystown Road, Tyrrelstown.
Polling stations are open between 7am to 10pm on 26 Friday, October 26th

‘A nightmare’: Families left in limbo over school closures