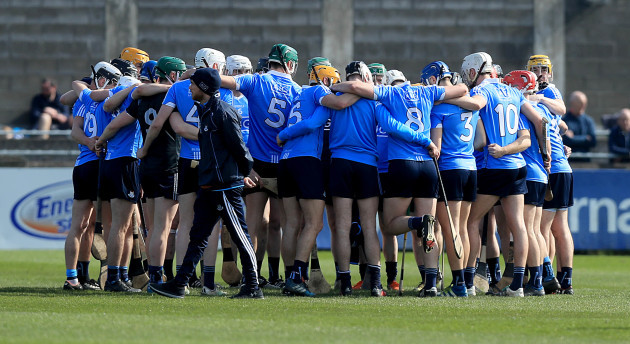 2017 was a year to forget for Dublin hurling.

THE RUMOUR MILL continues to whip up contenders for the vacant Dublin senior hurling manager position and team captain Liam Rushe has heard plenty of them.

Waterford manager Derek McGrath last week spoke out to distance himself from the suggestion that he is bound for the capital in 2018.

Speaking on The42 GAA Show today, Rushe revealed that the Dublin team leadership group have chatted with county board chief John Costello about the search to replace Ger Cunningham.

“All the names being bandied about are pure conjecture, sure you heard Derek McGrath was a dead cert to get it, before he came out and said it was all rumours.

“There’s a lot of rumours and pure speculation out there now, so I wouldn’t pay much heed to it.”

Rushe did admit that Cuala’s All-Ireland club winning manager Mattie Kenny is ‘to the fore’ in the list of candidates but his main desire is to see the new man appointed before the concluding stages of the Dublin club championship action.

Rushe also joined us to reflect on Galway’s thrilling win over Tipperary on Sunday, looking at the role of Joe Canning for Galway this season and why he think it’s not a problem that they haven’t been scoring goals regularly in 2017.

The two-time All-Star winner also looked ahead to the clash of Cork and Waterford next Sunday, explaining why he’s been so impressed with Cork’s young players – particularly defender Mark Coleman – and the potential distraction the Tadhg de Búrca appeals process could have for the Waterford camp.

You can watch the full show here: