TAOISEACH MICHEÁL MARTIN disagrees that former TDs and Senators should have their parking privileges on the Leinster House complex revoked.

Former Dáil deputies and senators have lifetime privileges at Leinster House and are entitled to use the full facilities, which includes free car parking if spaces have not been taken up by other politicians’ cars.

In previous years, the shortage of parking spaces outside the front and back of Leinster House has left some resorting to leaving their cars parked on the grass at the back of the complex.

During the early lockdown days last year, a decision was also taken to ask former politicians to stay away from Leinster House.

Advocacy groups, architects and academics have today written to the Oireachtas Health and Environment and Climate Action Committees, calling on them to restore the Leinster House garden at the Kildare Street entrance, which is now a car park for members and former parliamentarians.

The forecourt outside Leinster House was removed in favour of car parking in 1948, at a time when it was believed that the private car was the future of urban transportation, said the groups.

However, when asked about the call for the restoration of the garden, and the revoking of former members parking rights, the Taoiseach told The Journal that the contribution of former office holders should be recognised.

“The degree to which former members use the facilities isn’t as significant as we might think in any one year,” he said.

“I think we also have to acknowledge the role former parliamentarians played in society and in life,” added the Taoiseach.

“That said, I do think we have to, at all levels, work to restore biodiversity and to encourage public transport, cycleways and walkways,” said Martin.

However, he stopped short of telling former members of the Oireachtas to cycle or walk into Leinster House if they are visiting. 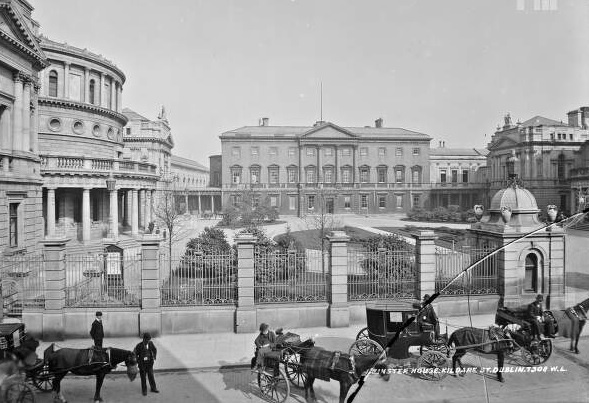 The Taoiseach said he is in favour of restoring biodiversity and green areas, citing the green space at Merrion Square entrance of Leinster House, which has been wilded.

The wild meadow has “worked nicely”, he said.

The advocacy groups that have called for the restoration of the garden at Leinster House said in their letter to the committees that “it is not enough for you to pass bills to encourage these changes. We need you, as our representatives, to also embody them. We need you to lead by example”.

Signatories to the letter include Irish Doctors for the Environment, Irish Pedestrian Network, Dublin Cycling Campaign, Friends of the Earth, Irish Architects Declare, Irish Georgian Society, as well as dozens of individual signatories from various fields in academia, health, architecture, journalism and environmentalism.