TAOISEACH MICHEÁL MARTIN has said that religious organisations should make an apology to survivors of mother and baby homes and should also “make a contribution” towards a redress scheme.

Speaking this afternoon following the publication of the long-awaited final report of the Mother and Baby Homes Commission, Martin said it “opens a window into a deeply misogynistic culture in Ireland” and sheds light on a “dark, difficult and shameful chapter”.

The report details the experiences of women and children who lived in 14 mother and baby homes and four county homes – a sample of the overall number of homes – between 1922 and 1998.

It confirms that about 9,000 children died in the 18 homes under investigation – about 15% of all the children who were in the institutions.

“The regime described in the report wasn’t imposed on us by any foreign power,” the Taoiseach said.

Martin confirmed at a press conference this afternoon that he would deliver a State apology in the Dáil tomorrow. When asked by TheJournal.ie whether the church should also apologise he said they should seek to do so.

“I don’t want to dictate to others but I do believe that the church should examine this report comprehensively. And then maybe make the appropriate apologies in respect of sectors of the church that have behaved so badly here and that in many ways imposed what I described earlier as a perverse moral code in relation to sexuality,” he said.

Minister for Children Roderic O’Gorman said that he has written to the religious congregations involved and has sought a meeting which he hopes would take place in the coming weeks.

“Particularly to discuss the issues around whether they were looking to make their own apology, a contribution to the Restorative Recognition Scheme and also the provision of some of their records,” he added. 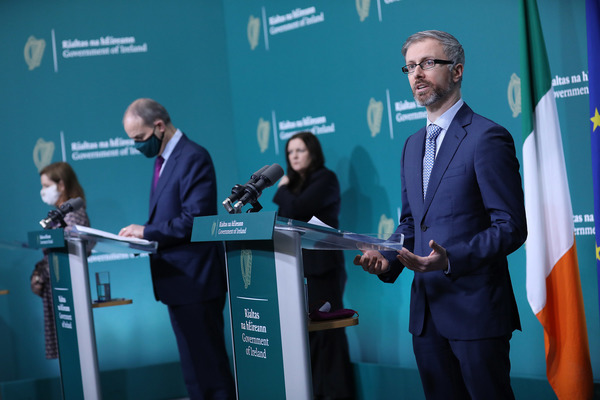 Ministers at this afternoon’s press conference.

A number of religious orders have responded to the report this evening, welcoming its publication.

The Sisters of the Sacred Hearts of Jesus and Mary, which ran mother and baby homes in Bessborough, Roscrea and Castlepollard, said it wished to apologise to those “who did not get the care and support they needed and deserved”.

The group said they opened the homes following a request from local authorities.

“As today, we respond to the urgent and unmet societal needs in our mission throughout the world, so we responded at that time and established the three homes in Ireland,” the religious order said.

Our thoughts today are mainly with the thousands of women who were taken, sent or driven by societal and family pressure to have their babies in secret in mother and baby homes.

“For our part, we want to sincerely apologise to those who did not get the care and support they needed and deserved.

It is a matter of great sorrow to us that babies died while under our care. We sincerely regret that so many babies died particularly in regard to Bessborough in the 1940s. We also want to recognise the dreadful suffering and loss experienced by mothers.

The burial of infants and children who died while in care has understandably become a matter of immense controversy. We are distressed and saddened that it is so difficult to prove with legal certainty where many of these infants were buried especially with regard to Bessborough.

“We did everything possible including the engagement of a professional historian to assist us in our dealings with the Commission on this vitally important matter.”

In a separate statement the Daughters of Charity, which ran the Pellstown mother and baby home in Dublin, said that women who were in these facilities were “isolated and shamed without justification”.

“Many of our sisters dedicated their lives to supporting these women, who arrived at the service in which the sisters were employed to have their babies in secret, with little or no support from family and wider society,” the group said.

We so wish and deeply regret that we could not have done more to ease the burden and suffering carried by these women, mostly alone, as they dealt with both a major crisis in their lives and totally unjustifiable rejection.

Catherine Corless, whose research uncovered a mass burial site at a former home in Tuam, told RTÉ’s Six One News this evening that Martin has disappointed survivors by “putting the blame back on society”.

“Nobody’s looking for naming and blaming whatsoever, they just want an acknowledgement of what’s happened to them in those homes, because the State weren’t in the homes when the survivors went through a terrible time. The government are talking about the horrendous testimonies from the people, surely to goodness the church needs to make a statement,” she said.

In terms of redress, the report notes that redress “can be financial or can be in the form of enhanced services” and states that any decision on financial redress is “a matter for government”.

The report notes that the State has previously paid out compensation to the survivors of industrial institutions and Magdalene Laundries.

O’Gorman said this afternoon that the government is to set up an inter-departmental group which will “consider the recommendations from the commission and the wider issue of what is the correct categorisation of those who should who should receive redress.”

He also said that a Restorative Recognition Scheme would be brought to Cabinet by 30 April and progressed “as quickly as possible”.

The minister said he would wish to speak to the organisations first to “discuss their willingness initially” before speculating on how much religious organisations could contribute.

The Taoiseach also said that church organisations should contribute to the redress scheme.

“Yes, I think the religious orders concerned in particular should make a financial contribution to any scheme that the government is developing,” he said.

Particularly where lands would have been sold for example, that there would be proceeds there which could contribute to such a scheme.

The Taoiseach said that “in principle” this should be in the form of a percentage of the overall redress scheme.

“There’ll be a legal dimension to this but yes, in principle, I believe the religious orders concerned should make a contribution.”

Speaking on RTÉ’s Drivtime programme this evening, retired Archbishop of Dublin Diarmuid Martin said that “people who performed acts of harshness are the ones who have to take the responsibility”.

Asked about redress, Martin said: “I think that’s going to be an interdepartmental commission and I think that these are better done in setting out the program than coming back to it.”