TAOISEACH MICHEÁL MARTIN has said it is impossible to enforce mandatory quarantine for people arriving in Ireland, even for those who come from countries that are not on the newly published green list.

The list contains 15 countries and territories people can travel to and return from without having to restrict their movements upon arriving in Ireland.

Speaking in the Dáil this afternoon Martin said: “In terms of the mandatory quarantine, this has been articulated for quite some time. It is impossible to enforce in the first instance.

Secondly, it is questionable as to whether it works well. In some countries they have brought in mandatory quarantining and it led to a cluster where the actual quarantining was taking place.

“That happened and the advice we have got and discussed with the WHO (World Health Organisation) and others really is that you must be able to contact people very quickly once they come into the country.”

The Taoiseach said if people return from countries that are not on the green list and they do not restrict their movements it could risk schools not being able to reopen in September.

“Anyone who travels outside of those 15 countries that we have identified should restrict their movements when they return to Ireland without question.

“In our view, we don’t want families going on holidays to those countries in the first place. It is very important they don’t risk the capacity of schools to open or indeed create situations that could lead to the spread of the virus.”

Harris said ministers are “not travel agents” and the list should not be taken as a list of holiday destinations.

“The advice is clear – we do not want people in this country to go abroad for holidays. We believe the safest thing you can do is holiday in Ireland. We also believe from an economic point of view the best way we can help our country, the hospitality and others that have been so badly hit by this pandemic is to support them.”

Speaking on RTÉ’s Morning Ireland today, Minister for Foreign Affairs Simon Coveney said the safest thing to do it “not travel abroad”.

He said he can “accept that there has been confusion” over the matter but that a decision has now been made, adding that government advice is now “simple and clear”.

“It is important to say that the travel advice has changed in relation to countries that are on this so-called ‘green list’, but the overall message from government is that the safest thing to do is to stay at home. That’s a very clear message,” Coveney said.

But it is important for people who are travelling, and many people are making the decision to travel, we’d rather they weren’t but they are, about 50,000 people a week. It’s important that those people have clear information in relation to risk levels, that impacts on travel insurance and other decisions that they need to make.

Speaking further about travel insurance, Coveney said that insurance companies “will make decisions on the basis of the official travel advice”.

He noted that the official travel advice for the 15 countries has now been changed on the Department of Foreign Affairs website to make clear they do not represent a higher risk than Ireland. 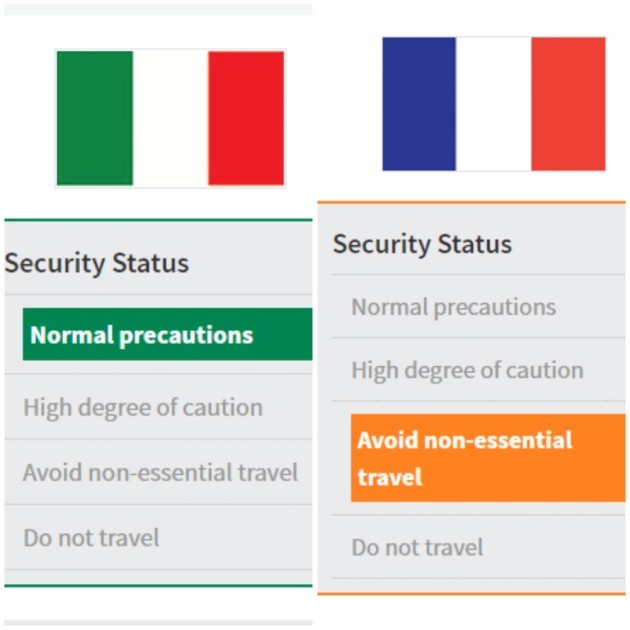 Italy is on the green list and France is not.

Speaking about the inclusion of territories like Gibraltar and Monaco on the green list and the fact that travellers may have to move through ‘red list’ countries to reach them, Coveney said it is not a concern if people are merely transiting through an airport.

This advice has been repeated by the National Public Health Emergency Team (Nphet).

Coveney said that the government has “considered it seriously” but that “we don’t regard it as an approach that makes sense from an Irish perspective”.

The minister said that international travel into Ireland has nonetheless fallen “dramatically” in recent months.

“One of the things that we will have in place in the next few weeks, is we will have random testing in our airports for people coming from non-green list countries,” Coveney added.

We will have testing facilities available in airports for people who may have symptoms of Covid-19 coming through the airport and the airport may have concern about that. So, there are things we can do to constantly improve our protocols and management of risk linked to international travel.

Speaking yesterday, Tánaiste Leo Varadkar suggested that the publication of a green list could be interpreted as ‘mixed messaging’ from the government.

Asked about these comments by his party leader, Coveney said he accepted “there has been some confusion in the last number of days”.

Appearing on Newstalk Breakfast, Minister for Transport Eamon Ryan was also asked about that intervention by the Tánaiste and whether or not the ‘green list’ moniker was appropriate.

“If we didn’t apply any assessment of other countries’ risk, and if as is said Covid continues for a longer period of time, then we have a difficult issue. We do have to manage as an island how we connect with the rest of the world,” he said.

“For those who are traveling to countries with high incidence of Covid, we do have to make sure that those people do restrict their movements when they come back.”

– With reporting from PA and Michelle Hennessy.