TAOISEACH LEO VARADKAR has said that he has arranged a phone call with the Egyptian President where he will ask for Ibrahim Halawa to be allowed return to Ireland after his trial.

Halawa (21), an Irish citizen, was arrested during a protest in 2013 in support of the Muslim Brotherhood’s Mohamed Morsi who had been ousted from power in a military coup.

The hearing of Halawa’s case was delayed 28 times before his legal team finally had a chance to defend him in court two weeks ago. It is believed that a verdict will be delivered in the trial this Monday.

Speaking to RTÉ News, Varadkar said that the government is keen to ensure that Halawa “can return to Ireland as soon as possible”. 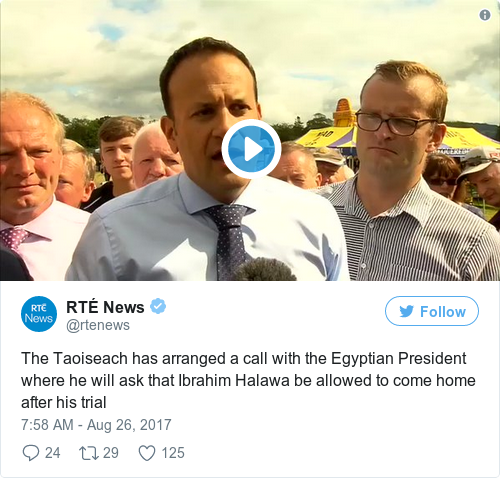 The Taoiseach has arranged a call with the Egyptian President where he will ask that Ibrahim Halawa be allowed to come home after his trial pic.twitter.com/4xYs1BeM6e

We will do everything we can to enable him to come home.

The government has petitioned the Egyptian government to take action in Halawa’s case, after his trials were repeatedly put back while he remained in prison indefinitely.

Commenting on the recent evidence given in court, Minister for Foreign Affairs Simon Coveney said: “There is no doubt that the end of this ordeal now appears closer than it has done at any point during the past four years”.

Ireland’s Ambassador to Egypt, Damien Cole, and a team of observers from the Irish Embassy were in court to monitor the proceedings and to report back to the Irish government on today’s developments.

Read: Almost four years after arrest, Halawa’s lawyers have been able to defend him in court