GERMAN CHANCELLOR ANGELA Merkel will soon be wrapping up a historic 16 years in power, leaving behind an uncertain legacy.

In office so long she was dubbed Germany’s “eternal chancellor”, Merkel (67) leaves with her popularity so resilient she would likely have won a record fifth term had she sought it.

Instead, Merkel will pass the baton as the first German chancellor to step down entirely by choice. Germans will head to the polls tomorrow to elect new members of the Bundestag (parliament).

Yet critics argue that a muddle-through style of leadership, pegged to the broadest possible consensus, lacked the bold vision to prepare Europe and its top economy for the coming decades.

What is certain is that she leaves behind a fractured political landscape and her party the Christian Democrat Union’s new candidate, Armin Laschet, has struggled to sharpen his own profile.

His Social Democratic opponent, Finance Minister Olaf Scholz, has actively – and perhaps successfully – sold himself as the real continuity candidate.

Assuming she stays on to hand over power, Merkel will tie or exceed Helmut Kohl’s longevity record for a post-war leader, depending on how long the upcoming coalition negotiations last. 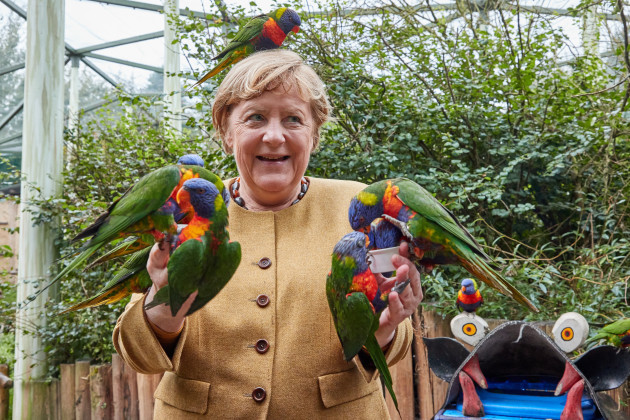 Angela Merkel at a bird park in Germany this week.

‘Do the right thing’

The unflappable Merkel has served for many in recent years as a welcome counter-balance to other world leaders like Donald Trump and Vladimir Putin.

A Pew Research Center poll this week showed large majorities in most democracies around the globe having “confidence in Merkel to do the right thing in world affairs”.

However, the last days of her tenure have also been marred by what Merkel called the “bitter, dramatic and terrible” return to power of the Taliban in Afghanistan – a debacle in which she shares the blame as Germany completed its evacuation.

A trained quantum chemist, Merkel has long been in sync with her change-averse electorate as a guarantor of stability.

Her major policy shifts reflected the wishes of large German majorities – among them phasing out nuclear power after the 2011 Fukushima disaster – and attracted a broad new coalition of women and urban voters to the once arch-conservative Christian Democratic Union. 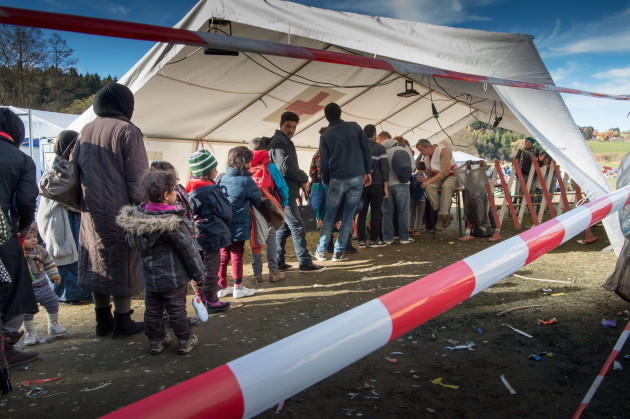 Refugees waiting to cross the German-Austrian border in 2015.

Before the pandemic, Merkel’s boldest move – opening German borders in 2015 to more than one million asylum seekers – seemed set to determine her legacy.

But while many Germans rallied to this move, it also emboldened an anti-migrant party, Alternative for Germany (AfD), ushering a far-right bloc into parliament for the first time since World War II.

At the same time, hardline leaders such as Hungary’s Viktor Orban accused the chancellor of “moral imperialism” with her welcoming stance.

Six years on, she lamented this month that the European Union appears no closer to a unified policy on migration.

The woman once known as the “climate chancellor” for pushing renewables also faces a mass movement of young activists arguing she has failed to face up to the climate emergency, with Germany not even meeting its own emissions-reduction commitments.

Angry protesters criticised Merkel and labelled her Europe’s “austerity queen” while defenders credit her with holding the currency union together. 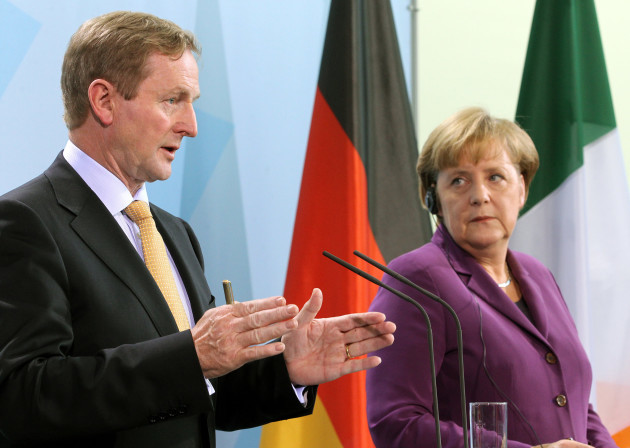 Former Taoiseach Enda Kenny and Angela Merkel at a press conference in 2011.

She was born in 1954 in the German port city of Hamburg, the daughter of a Lutheran clergyman and a school teacher.

Her father moved the family to a small-town parish in the communist East at a time when tens of thousands were headed the other way.

She excelled in mathematics and Russian, which has helped her maintain a dialogue with Putin.

Merkel, born as Angela Kasner, kept the surname of her first husband whom she married in 1977 and divorced five years later. 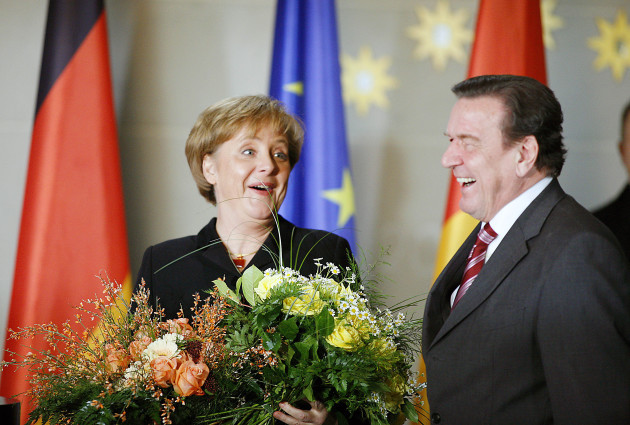 File image of former German chancellor Gerhard Schroeder handing over the Federal Chancellery to Angela Merkel in Berlin, Germany in 2005.

After the fall of the Berlin Wall in 1989, Merkel, who was working in a chemistry lab, joined a pro-democracy group that would merge with former chancellor Helmut Kohl’s Christian Democrats.

Merkel, a Protestant from the East whom Kohl nicknamed his “girl”, would later be elected leader of a party until then dominated by western Catholic patriarchs.

As she rose to power, party rivals sneeringly called her “Mutti” (Mummy) behind her back but she deftly – some said ruthlessly – eliminated potential challengers.

Although her name has come up on wish lists for key EU or United Nations posts, Merkel has said she will leave politics altogether after leaving her role as chancellor.

Asked on her final trip to Washington in June what she looked forward to most, she replied “not having to constantly make decisions”.