STEPHEN KENNY IS hoping this week’s training camp in Girona can help bring some of the fun back into being part of a Republic of Ireland squad.

2020 was a miserable year for Kenny and his team, and so far 2021 hasn’t been any better. The manager wants his players to express themselves on the pitch and enjoy their football, but encouraging passes of play count for little when you go 11 games without a win.

This is a team that badly needs a break, and the hope is that the friendlies against Andorra and Hungary can finally provide a first win of the Kenny era ahead of the World Cup qualifying fixtures in September.

The manager has been plagued by bad luck since stepping into the job and is down numbers again this week, but at least has the rare luxury of an extended period of time to work with his players.

Their trip to Spain started with some video reviews of the March defeats to Luxembourg and Serbia. On the training pitch there is much work to be done, but Kenny also wants his squad to enjoy their time together in a more relaxed setting this week, having previously highlighted the difficulty of organising team bonding exercises in Covid-restricted camps.

“There are a few things going on,” Kenny said, speaking from the team hotel in Girona this weekend.

“There is a table tennis competition going on at the minute. There are a few dark horses there and I think Shane Duffy fancies his chances in that one. There are various things going on in their spare time. They’ll get to play a bit of golf, they’ll be able to relax as well when they’re not training, so it is an opportunity for that as well.”

Kenny hopes the new faces in his squad can help sharpen Ireland’s worryingly blunt attack, and has highlighted the lack of ‘incisive passes’ as a particular issue. His squad this week contains a number of attacking-minded players who are getting their first taste of international football.

For players like Danny Mandroiu (22), Jamie McGrath (24) and Chiedozie Ogbene (24), it’s a big step in their young careers. 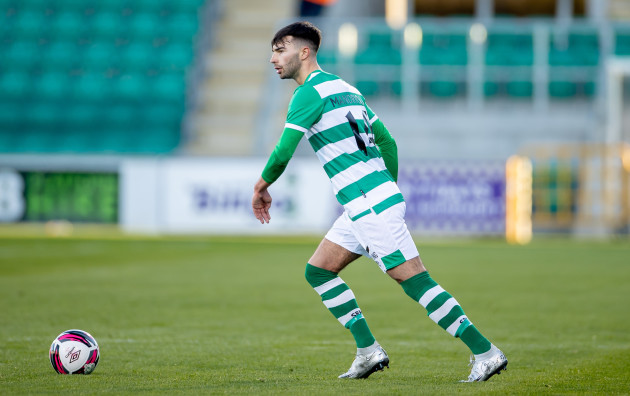 Shamrock Rovers’ Danny Mandroiu is one of the new faces in Kenny’s squad.

Kenny reiterated his strong belief in giving opportunities to young players, while also acknowledging the need to start picking up some results.

Regardless of who is on the pitch against Andorra – currently 158th in the world rankings – anything other than a win on Thursday would be viewed as another disaster.

“We have an emerging group coming through that a lot of coaches right throughout the country have worked on extremely hard through the years, grassroots level, through the clubs, to England and come through the international teams,” Kenny said.

“The Irish public will identify with these players and when they are successful, there will be a great connection there I feel, very powerful. But we have to start winning matches and take it from there.

Captain Seamus Coleman won’t be fit for the Andorra game, but Kenny is hopefully of having him available for Hungary, while Conor Hourihane and Ryan Manning were due to fly out to join the squad following Swansea’s Championship play-off final defeat to Brentford.

Kenny made a point of commending the commitment of those players, and explained why he feels this extended period of time with his squad can prove an important step in the team’s development.

“Some of the things that we’re learning all the time after games in relation to the players’ contributions… For example, we were able to do video analysis of previous games and areas of improvement with the players (this week), and you don’t (usually) get a chance to do that obviously because they’re with their clubs and you can’t really do it properly until you get in a room.

“When you do have an international camp, for example, you might get in on a Sunday or Monday night and your match might be Wednesday and a flight to Serbia or wherever – you’ve got a focus on Serbia, you can’t be going over stuff from previous matches.

“So it’s hard to get the balance right on that, and (this week) it gives you an opportunity to do that and work on the training ground, video the training, analyse the training so the players can look at areas we want to improve on and adapt it to the different systems of play, because the players we have also influences the system you play. Obviously the opposition is a factor and the players that are available.

“We had really good performances in Serbia and then we were very, very inconsistent and erratic performance against Luxembourg so I think there are areas we certainly need to improve. I think the players are well aware of that and we need to give clear instructions and that is no less than expected from them, and this week gives them the opportunity to understand that.”