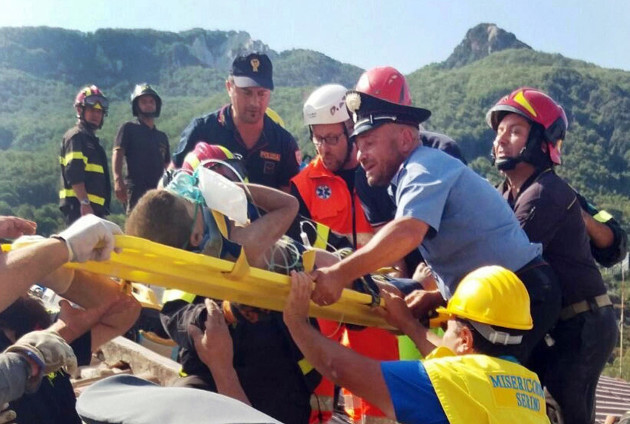 Mattias is placed on a stretcher after being rescued.

ELEVEN-YEAR-OLD Ciro, the last child to be pulled from the rubble on the Italian island of Ischia today, saved his little brother’s life when the deadly earthquake struck, rescuers workers said.

Firefighters had to dig with their bare hands to reach the youngster, who had been buried along with his seven-year old brother Mattias and seven-month old half-brother Pasquale.

“It was Ciro who saved Mattias,” said policeman Andrea Gentile. “He dragged him and pushed him under the bed with him, a gesture that without a doubt saved both their lives.

Then with a broom handle he banged on the rubble so the rescuers could hear him.

But as a dusty Mattias was pulled free from the rubble, firefighters broke into applause. Ciro, rescued after 16 hours in the dark, was loaded into a waiting ambulance. 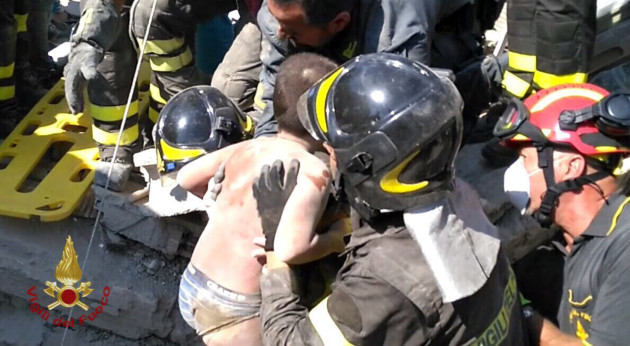 Firefighters pull out a boy, Mattias, from the collapsed building in Casamicciola a day after an earthquake hit the Italian island of Ischia.

The boys’ father, whose hands were bandaged after spending the night digging through the rubble alongside the firefighters, could be seen tearfully hugging relatives as his eldest son was saved.

Emergency workers had previously recovered the boys’ seven-month-old brother, Pasquale, crying but alive, after hours of effort overnight. Their pregnant mother had sounded the alarm.

However, a woman was killed in Casamicciola, in the north of the small tourist island, by debris that fell from a church, while the body of another was spotted in the rubble of a collapsed house, local media reported.

Two small communes, Casamicciola and neighbouring Lacco Ameno, bore the brunt of the quake, according to the civil protection agency. 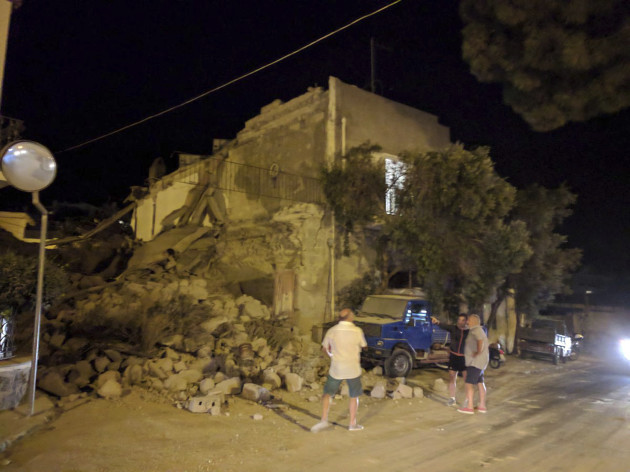 People standing near a collapsed building following an earthquake in Casamicciola.

Italian authorities first put the quake at a 3.6 magnitude, but later revised it upward to 4.0 – in seismic terms, a modest event.

The main earthquake was followed by 14 smaller aftershocks. Several buildings collapsed while others had large, ominous cracks.

In total, 39 people were injured, one seriously.

“Italy is united with Ischia in sorrow for, and solidarity with, the victims. We stand side-by-side with those taking part in the rescues,” Prime Minister Paolo Gentiloni said on Twitter.

Many holidaymakers packed their bags and rushed to catch special overnight ferries back to the mainland. 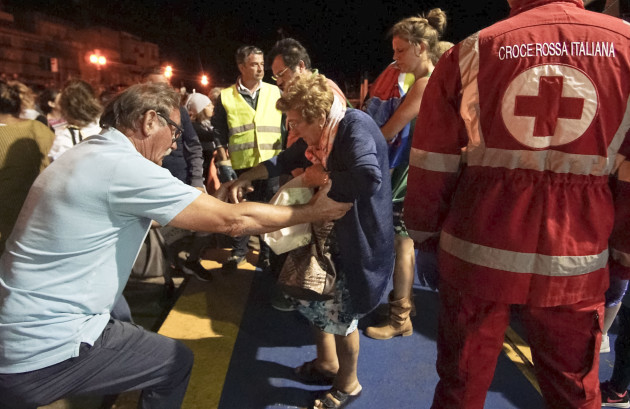 Tourists fleeing from Ischia land at Pozzuoli, near Naples.

The quake struck just days ahead of the first anniversary of the 6.0 magnitude quake that killed nearly 300 people in and around Amatrice in central Italy. In October 2016 and January 2017 three other earthquakes hit the same region.

Francesco Peduto, head of Italy’s National Geologists Association, slammed shoddy construction and a lack of earthquake prevention measures, saying a 4.0-magnitude quake should not have brought down buildings.

“It’s frankly extraordinary that people continue to die in earthquakes of this size,” he said.

The quake response has benefited from the presence of emergency responders who were on the island to fight forest fires that have plagued Italy this summer, local media said. 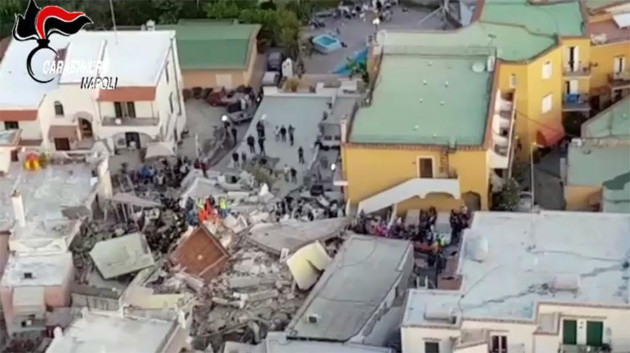 This image, grabbed from a video taken from a helicopter made available by Italian Carabinieri police, shows an aerial view of Ischia island the day after the earthquake

“I was on the couch watching TV. Blackout, shaking, something fell on my head. I scream, my mother grabs me and we ran outside,” one witness wrote on Twitter.

Teams of firefighters, including two units specialised in extracting people from rubble, were quickly mobilised, said Bruno Frattasi, who oversees the fire department.

Ischia’s only hospital was also hit and had to be partially evacuated, with five patients transferred to another medical facility by helicopter.

Restaurants were packed and many stores were still open when the shaking began, witnesses said on Twitter.

“A horrible experience, everything was shaking, plunged into darkness, houses were collapsing… a nightmare,” one wrote.

Ischia is often hit by earthquakes, with its worst dating back to July 1883, when an estimated 5.8-magnitude quake killed more than 2,000 people.

Italy straddles the Eurasian and African tectonic plates, making it vulnerable to seismic activity when they move.